Andrew Haigh’s Criterion Collection-approved second film, Weekend, was an intimate, sharply observed character study about two young lovers just getting to know each other. In 45 Years, Haigh’s less successful follow-up—imagine a less grating Le Week-End— the two main characters, Kate (Charlotte Rampling) and Geoff (Tom Courtenay), are at a much more advanced stage in their relationship. The title refers to the couple’s impending 45th anniversary—as one of their party planners remarks, it’s an odd anniversary to celebrate, but Geoff’s health impeded the event planned five years earlier. The film takes place over the week leading up to the affair as Kate and Geoff struggle through an unexpected disruption.

On Monday, Geoff receives a letter informing him that the body of his former girlfriend, Katya, has been recovered. A few years before meeting and marrying Kate, the two lovers had gone hiking in the Swiss Alps, where Katya tragically fell through a crack in a rock and died. Her body preserved for decades in a coffin of ice, she is discovered in the present day in a melting glacier. (Some read the film partially as a climate change metaphor, but Haigh doesn’t put too much emphasis on this point.) Tensions rise as Geoff becomes increasingly withdrawn, clearly preoccupied by the news, and Kate grows equally obsessed with this important figure from her husband’s past—in truth, Geoff probably would have married Katya if not for her death, meaning he and Kate only ended up meeting because of a horrible tragedy. 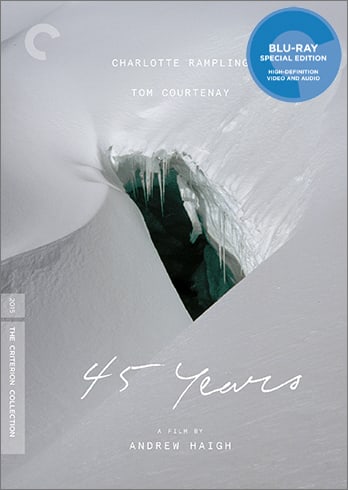 Maybe it’s Haigh’s comparatively young age, but the material just doesn’t feel as authentic this time around. Nobody could be cynical enough to accuse 45 Years of being mere awards bait, as the sincerity of the filmmaker and actors is beyond question; but nevertheless, this is the exact kind of unexceptional, solemn acting showcase that tends to get released toward the end of the year and rakes in the shiny gold statues. Indeed, Rampling—truly as beautiful, and of course as talented, as ever—has been celebrated for her performance, winning prizes already from the National Society of Film Critics and the European Film Awards. Rampling is far from bad, but the film feels over-rehearsed; every line of dialogue sounds written, every gesture seems planned. The actors, boxed in, have no room for spontaneity. This means that even some of the best moments feel orchestrated, such as the way the camera will linger on the characters’ faces in the beautiful blue blackness of night just after turning out the bedside lamp, or the scene in which Kate runs through an entire slide carousel looking for images of Katya, the stationary camera capturing the projected images from behind the screen as Kate gazes, stock still.

Perhaps that lack of spontaneity is partly the effect Haigh is straining for. After all, Kate and Geoff have been married for nearly half a century, and we get a sense early on of their familiar routines. Without a doubt, Haigh worked with his actors to create a shared history for these characters in order to fill out parts of their marriage that aren’t glimpsed in the film. But still, in spite of whatever preparation was done, Rampling and Courtenay aren’t quite convincing as a couple. Aside from the distance that grows between them as the film goes on, there’s also a distance that reminds you that these are just two actors working, not people who have actually known each other for decades. One thing the film—and the actors—should be commended for is a physically awkward sex scene that encourages the viewer to laugh with the characters, rather than at them. It’s refreshing, for once, to see sex treated with maturity and honesty; but this brief scene is a peak in a film that’s almost all valley.

Ocean’s Thirteen won’t go down as Soderbergh’s crowning achievement, but it’s a gift for t…