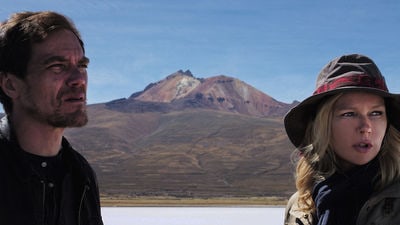 Ensconced among the highest reaches of the Bolivian Andes, the Salar de Uyuni is the world’s largest salt flat, an otherworldly slab of crusted chlorides cast in a shimmering alabaster hue. A sunbaked exercise in landscape extremity, this isolated stretch sits like a scab atop a long-dead prehistoric lake, capable of supporting barely any plant or animal life. In short, it’s the perfect shooting location for Werner Herzog, the famously grave German whose fondness for solemn pronouncements on nature’s inherent grotesquerie has long since lapsed into shtick. That doesn’t quite mean he’s no longer capable of creating compelling work, but the same single-minded mania that’s helped grant him access to steady funding has also allowed these opportunities to indulge his worst impulses, leading to an increased productivity that’s been matched by an analogous dip in quality.

Such shoddiness is on full display in Salt and Fire, a wan, half-baked desert-set drama which plays more like parodic caricature than a piece of genuine Herzogia. Many of the auteur’s career-long trademarks are present, in a plot about corporate overreach and scientific fecklessness that finds a cadre of eco-terrorists kidnapping a foreign delegation to send a political message. Scooped up at the airport and spirited away to a secluded mountain estate, Laura Sommerfeld (Veronica Ferres) finds herself cut off from her companions, ministered to by the group’s almost-charming leader, then sent on a sort of spirit journey to the salt flat, accompanied by two blind native children and a limited supply of water. This long passage in the wilderness finds two genres intermingled, the film’s early corporate thriller trappings mixed with the mind-expanding vision quest, a fusion that might have yielded at least some measure of gonzo absurdity, but instead just feels dull despite being constantly unhinged.

It should be reiterated that Herzog, who’s 74, has released four films in the past year, with the Nicole Kidman-starring biopic Queen of the Desert coming out the same week as this one, for whatever reason. Only one of these—the Netflix-distributed Into the Inferno—has shown any real novel vision, tracing out how the hot magma of belief cools into the fixed cement of doctrine and orthodoxy. In other cases, as evidence of a mounting burnout that stretches back to at least 2005’s Grizzly Man, he’s fallen victim to the same type of creative holding pattern that’s occupied elder statesmen like Woody Allen, forestalling further growth by focusing on the same central neuroses and techniques.

This makes for narratives which include all the nihilism and intensity but none of the grandeur or majesty, with characters acting as flat mouthpieces for the director’s own bleak apocalyptic vision. Adapted from a short story by Tom Bissell, Salt and Fire also centers around the symbolic spectacle of a volcano, in this case one that’s lain dormant for thousands of years. When it inevitably blows, it could bring about the end of civilization as we know it, assuming we haven’t already done it ourselves. Such end-times subject matter now seems increasingly relevant, as a variety of environmental and political factors converge to make the world an increasingly endangered place.

Situated at the nexus between these two factors, Salt and Fire seems positioned perfectly to comment on this state of affairs, yet offers little more than broad outlines, vague ideas and clunky writing. Attempting to impart a heady, spiritualist-inspired mysticism, it offers only sketchily-conveyed weirdness, knit together by a plot that never really approaches coherence. Perhaps more famous and secure than he’s ever been, Herzog now seems adrift within the cinematic production system he’d spent years rebelling against, resulting in an abundance-of-riches scenario that’s apparently damaged his ability to produce top-tier work.