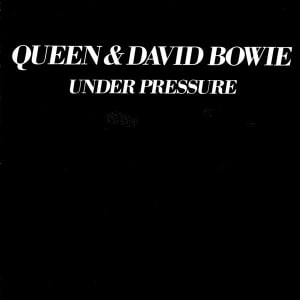 It was the perfect combination. Bowie, ever chameleonic and theatrical, was first and foremost a performer first, and perhaps no band took that mentality to heart more than Queen. But even for these two operatic artists, “Under Pressure” was a blend of melodrama and musical theatre on unparalleled plane. John Deacon’s iconic bassline was the sole constant through the ever morphing song, centering the sound as Bowie and Freddie dueled. And no, it’s not a duet, it is a duel. Each a singer turned the charisma up to 11, one upping the other with each passing line. Mercury pulls off a vocal triathlon, switching effortlessly from freeform scatting, anthemic chorusing and impeccable falsetto. While Mercury holds down the gymnastics, Bowie works within a smaller range, but it’s just as emotionally punchy, his ghostly voice in the verses allowing Mercury to flutter.

More importantly, as Mercury and Bowie egg each other on, the music behind them subtly rises as well, creating a steady build until the final, fading bass notes. “Under Pressure” has no less than three climaxes, giving the whole affair a rollercoaster logic. That impossible note from Mercury would be the centerpiece of any other song, hell, any other album, but everyone here knows they can outdo it. Queen and Bowie roll into a drum solo, a massive chorus and a heartfelt closing bridge just after Mercury pierces the stratosphere.

“Under Pressure” gives the platitudes a more world-wide rather than personal view, but that’s perfect for these kind of hysterics. Bowie musing about how “love dares you” and Mercury screaming about “people of streets” between bursts of lovely nonsense might not connect from person to person, but for an arena, it could not have been better crafted. A set list standard for Queen, Bowie never performed it live until after Mercury’s passing. With such a sterling, unexpected effort, the only regret is that we never got an album-length collaboration from these two. – Nathan Stevens 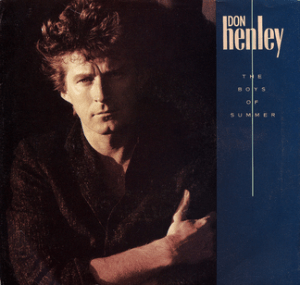 The first single released from Building the Perfect Beast demonstrates why the album was virtually unstoppable in its day. While Henley and his Eagles cohorts captured the zeitgeist of ‘70s excess with Hotel California, with co-writer Mike Campbell he bottled the fallout and frustration of that decade in just under five minutes. “Boys of Summer” is at once the story of a faded summer and faded love and a forecast for the hippie dream’s death knell. “I saw a Deadhead sticker on a Cadillac“ perfectly encapsulates that moment when the counterculture became the establishment, when commodification had reached an early and ugly apex.

The minor key, Campbell’s swirling, swooping guitar lines and the music’s haunting nature evokes the sense of an inescapable future, that whatever warmth the past shed upon us is nothing more than fading glory. Time has done little to dim the power of the portrait it paints or the visceral power of its message. “Boys” was covered by The Ataris, and DJ Sammy, and more recently by vocalist Petra Haden, whose walloping rendition comes closest to capturing the unease of the original.

There was unease in the year 1984, when the hands of the Doomsday Clock were moving closer to midnight, when the gap between the rich and the poor was widening, when the country appeared to be rudderless in the ocean of morality. As fashionable as it’s become to complain about the Eagles and Henley in particular, he was then and now a seer and a seeker, a man who spoke to what his hero Henry David Thoreau called “the much vexed questions of the day,” even if he can’t always answer them. – Jedd Beaudoin