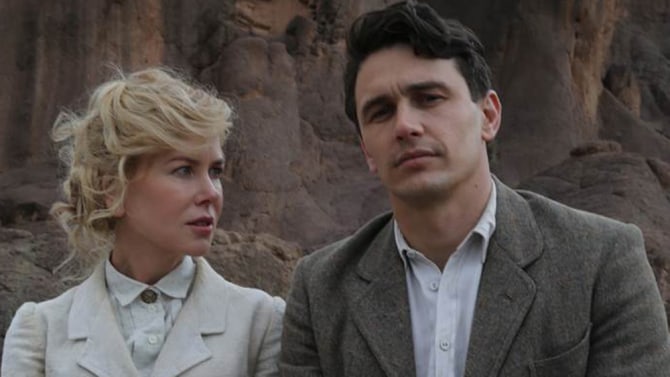 Queen of the Desert is a distasteful costume-drama period-piece that should be skipped even by Herzog and Kidman fans.

Queen of the Desert Ryne Clos

Queen of the Desert is a plotless, pointless film founded upon fraught political assumptions that are even more dangerous within our current geopolitical context. It luxuriates in its bombastic Orientalism to the point that it is tempting to read it as a satire. But this is a sincere film deluded by its own sense of importance in covering a figure it posits as a grand feminist icon. In celebrating its protagonist as a real-life heroine, Queen of the Desert willfully ignores her substantial role in inventing the modern Middle East and contributing to its current level of violence.

Writer/director Werner Herzog’s latest fictional effort is a biopic of Gertrude Bell (Nicole Kidman). Bell was a dedicated explorer, archaeologist, linguist and alpinist. She travelled throughout the Middle East in the two decades prior to World War I, worked as a spy for the British Empire during the war and became a prominent official in the mandate of Iraq in the years after the collapse of the Ottoman Empire.

While Queen of the Desert does not ignore Bell’s achievements, it certainly reduces many of them into a tedious plot more concerned with the men in Bell’s life than her immense historical importance. Kidman’s Bell bounces from a diplomat in Persia, Henry Cadogan (James Franco), to her overbearing father to a key British official in the war effort in the Middle East, Charles Doughty-Wylie (Damian Lewis). The film also disregards her significant linguistic skills. In fact, the language in Queen of the Desert is downright weird, as most characters—even Arab ones—often speak English but occasionally use Arabic instead, sending mixed signals to viewers about who is speaking what. In a similar vein, Bell is often portrayed as an ignorant bumpkin infatuated with the most cliché elements of the so-called Orient’s infectious appeal. And while Queen of the Desert never tires of telling the viewer that Bell was intelligent, independent and vital to history, it usually shows her instead lusting after men, stubbornly spurning sound advice or remarking aloud on the vivid colors of Arabian spice markets.

The most confusing aspect of Herzog’s mere lip-service to Bell’s life and impact is that he is not concocting a negative portrayal. It would be understandable to gloss over her achievements in order to emphasize instead her missteps and central role in the creation of the Middle East. But this is not the aim of Queen of the Desert. The film instead spends absolutely zero of its runtime reckoning with the troubling side of Bell’s biography as the person tasked with drawing the boundaries of Iraq, Jordan and Kuwait as a key colonial administrator in the early Iraq mandate government or as a champion of the Hashemite kings. When the film finally does get historical, it chooses to do so by focusing in on the deliberations between Churchill, Bell and Lawrence of Arabia in Cairo in 1921—a plot point included seemingly only to re-stage the iconic photo in front of the Sphinx. It gets the history laughably wrong, having the British officials dismiss oil as an important factor in their empire-building efforts in the region.

Because Herzog seems uninterested in Bell’s historical agency and intent on reducing her to the men in her life, Queen of the Desert becomes a predictable snooze-fest. It features a repetitious pattern of shots: Kidman riding a camel in the desert; Kidman riding her camel into an oasis; and then Kidman riding her camel into a stronghold manned by armed Arabs. Rinse and repeat. An alert viewer may notice that Bell seems to be the only woman who lives in the region, yet another Orientalist trope the film embodies rather than questions.

The film’s exuberant Orientalism, disregard for Bell’s role in installing empire and establishing a political culture of authoritarianism while entrenching sectarian divisions in the Middle East and its drift-less non-narrative plot structure overshadow its jaw-dropping cinematography, which features the camera gliding about and capturing desert vistas.

Queen of the Desert is a distasteful costume-drama period-piece that should be skipped even by Herzog and Kidman fans. Its politics would be inexcusable in any context, but are particularly reprehensible given the death toll in Iraq and Syria since 2003; one for which both Bell and Orientalist portrayals of the Middle East should be held partially accountable. Perhaps such problems could be overlooked if the film were at least well-crafted or a good character study, but it is neither of those.