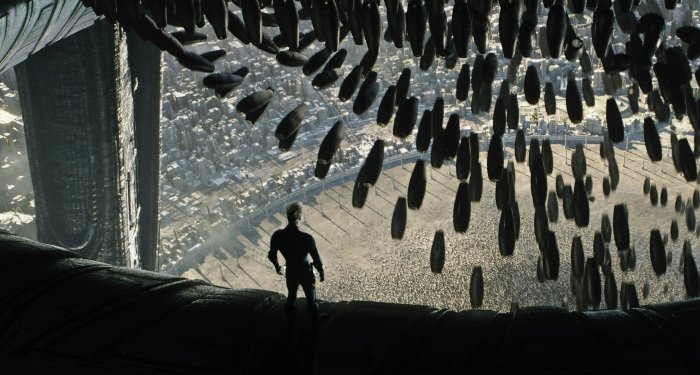 The best thing about the first Alien was its combination of character development and restraint. Alien: Covenant tries, but doesn’t come close.

Oh, Ridley Scott. You always sucker me in with your promising premises and fanboy milieus, whether it be an alien world, ancient Rome or war-torn Somalia. Yet, each and every time I walk out of the theater feeling bilked, jilted, hoodwinked. You peaked early, made your great movie back in 1979. You’ve been chasing that high ever since. So, it makes sense that now, in the twilight of your career, you return to the world that made you famous.

The good news is that Alien: Covenant isn’t nearly as terrible as Prometheus, Scott’s 2012 disastrous “prequel” to Alien. The bad news is that you need to see Prometheus to fully grasp what is happening in this installment. Following a brief prologue where Guy Pearce and Michael Fassbender reprise their roles from the first film, this new installment begins as the USCSS Covenant, a ship carrying 2,000 colonists to a new planet far from Earth, is detoured to another world after receiving a distress signal. There, the crew of the Covenant discover gruesome horrors beyond its wildest fears.

Much like its much lighter contemporary, Guardians of the Galaxy, Vol. 2, Alien: Covenant is about father figures. Fassbender reprises his role as David, a hateful android who hates his creator. If Prometheus and Covenant are really prequels to the Alien series, then you have to believe a robot with daddy issues is behind the creation of a species so lethal that only Sigourney Weaver can take it out.

While fine character actors such as Katherine Waterston, Billy Crudup and Danny McBride are on-hand to battle the aliens, Covenant is fully Fassbender’s picture. Besides playing the morally challenged David, Fassbender pulls double duty as Walter, a next generation android that is part of the Covenant’s crew. Following an initial massacre on the new planet, the remaining crew is lured into David’s lair and slowly learns the horrific plan that could not spring from the recesses of a human mind.

In many ways, Alien: Covenant is similar to its main character. It feels like an evil computer who despises its creator (or its audience) and spits out a script made of elements and lines we’ve seen and heard before. It is filled with icky violence and gross creatures, but rarely is any of it truly scary. Scott even refers back to one of the most frightening scenes from his original Alien, clanking chains and all, but does absolutely nothing with it. Worst of all, the film ends on a downbeat turn (followed by a twist that no one over the age of five should be surprised by), one designed to frustrate and anger.

Alien: Covenant isn’t the complete disaster Prometheus was, however. Some of the characters, such as Crudup’s flawed commander and Fassbender’s double turn as Walter and David, show some dimension. There are also some genuinely creepy moments in the early going, as well as reflective ones about the nature of humanity and its perception of its creator. But for every good decision, Scott does something that undermines his film, such as filming part of its climax in first-person alien vision! The best thing about the first Alien was its combination of character development and restraint. Alien: Covenant tries, but doesn’t come close.