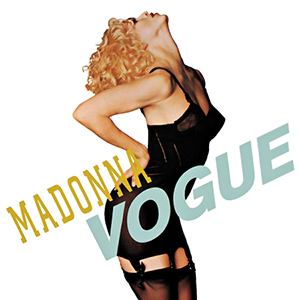 Madonna’s dance-pop-house anthem “Vogue” was 1990’s bestselling single worldwide, had a classic music video directed by David Fincher, was performed in Pope-boycotted, eye-popping style at the 1990 MTV Video Music Awards and cemented Madonna’s role as a gay icon. Co-written by Madonna and her frequent collaborator/producer Shep Pettibone, “Vogue” came out at the height of Madonna’s first period of superstardom. There have been at least five iterations of Madonna since, but “Vogue” represents the singer arguably at her best. And significantly, even though it was a colossal success—her biggest hit at the time—“Vogue” assured Madonna’s underground gay following that, no matter how famous she became, she would take right along with her.

Madonna acknowledged the pain that her listeners felt in their everyday lives, a clear call to LGBTQ+ listeners. She sang, “Look around, everywhere you turn is heartache/ It’s everywhere that you go/ You try everything you can to escape/ The pain of life that you know/ When all else fails and you long to be/ Something better than you are today/ I know a place where you can get away/ It’s called a dance floor, and here’s what it’s for, so/ Come on, vogue.” Even if they had no support at home, Madonna assured her fans that she had their back on the dance floor.

“Vogue” is also credited with being one of the songs to bring house music into the mainstream. Not to mention the act of voguing itself. The “Vogue” video made strides in cementing Madonna’s cone bra as a piece of pop culture history, though a form of it actually made its first appearance in her 1986 video for “Open Your Heart.”

“Vogue” remains Madonna’s most successful song in America. But, more than that, it served as a global proclamation of the singer’s now-famous, openhearted message, and it serves as a reminder that, though she’s often pushed the envelope, Madonna has often backed up her actions with unforgettable music. – Mike McClelland 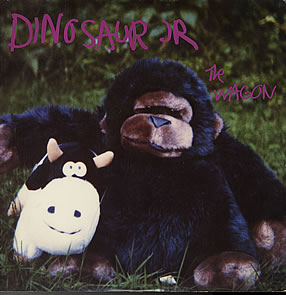 Dinosaur Jr.’s “The Wagon” doesn’t exactly begin as much as it seems to continue. The song is not there and then suddenly it is, as though the recording began well after the band had already reached full throttle. There’s no intro bars, phrases, build-up of instruments, layers or riffs. There is only J Mascis’ impatient whine as he sings, “There’s a way I feel right now/ Wish you’d help me/ Don’t know how.” It’s a cacophony of jangly, winding guitar chords and Murph’s drumming is furious and schizophrenic.

This is the sound that would help define a decade. This groundbreaking mash-up of punk abandon, pop melody and reckless approach to song structure created a space for musicians who didn’t want to fall into the well-defined musical troughs left behind by the ’80s. Dinosaur Jr. carved out a place for a new kind of alternative to the mainstream of heavy music. “The Wagon,” in all its sonically abrasive twists and turns, started the direction in which Dinosaur Jr. would continue to travel for the rest of their career—that of extreme vulnerability coupled with aggressive music acting as defense mechanism.

Mascis embraced a vocal style that not only celebrated what would normally be an inability to sing but exploited it, redefining how rock music could sound while still conveying emotions and mood without being contrived or repetitive. This was a song which might have struck you as terrible on first listen, but it would become somehow melodic white noise, even more blatantly challenging than some of the noise-pop outfits of the day.

As the refrain “Baby why don’t we?” is repeated over and over again before switching pitch abruptly into “You won’t see me/ You won’t see me,” the ear-splitting emotional call to arms straddles the line between sadness and hope, never quite taking you to its destination while picking you up and dropping you off just as abruptly. This song could only have come out in the ‘90s. – Darryl G. Wright