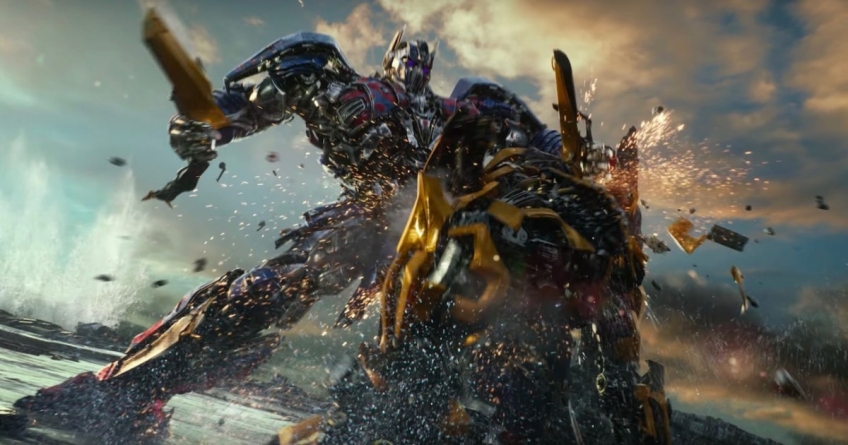 We’re all complicit in a world where Michael Bay has now made five fucking Transformers movies.

We’re all complicit in a world where Michael Bay has now made five fucking Transformers movies. Five. The first one was surprisingly fun in an anti-matter universe, Spielberg kinda way. The third one was arguably the most harrowing war movie to feature robots disguised as cars drawing and quartering one another. Now, with Transformers: The Last Knight, the Akiva Goldsman-run screenwriting think tank is running out of ideas. Well, no, that’s not fair. They’ve got plenty of ideas. They’re all just unspeakably dumb.

This is a franchise that for five successive films has tried to retcon the previous film’s understanding of Earth history and its relationship with the inhabitants of Cybertron. One wouldn’t imagine a mega blockbuster about robots disguised as cars would have a ton of stylistic overlap with The Da Vinci Code, but alas. This film opens with a huge prologue about how the Transformers were on Earth during the dark ages and how Merlin was just a drunk dude given a sci-fi staff from an alien machine. It’s ostensibly to set up this staff as the film’s primary MacGuffin, but it only exists so Bay can get his Game of Thrones on and film a cybernetic dragon taking out a bunch of dudes in armor.

From there, it’s two and a half hours of solid looking set pieces interspersed with a lot of questionable exposition and a cast of characters it’s impossible to care about. The Transformers themselves are compelling, sure, but Mark Wahlberg as the human lead, alongside returning cast members like Josh Duhamel’s ill-defined soldier dude or John Turturro as a scenery chewing spook, just feels like a diversion. This is a franchise that’s never quite figured out how to weave a relatable narrative with its regular folk in with the complex space opera of its robotic brethren. The resulting experience is a jarring one in which epic speeches and revelations are stitched together with bantering interludes written about one notch more maturely than an episode of Family Guy.

It would be unfair to imply the movie is entirely without merit. For one, it’s hard to beat for pure spectacle, as Bay is still the world’s most accomplished arranger of explosions and barbarism. Perhaps his greatest achievement in this otherwise middling film series is in how accurately he’s able to capture robotic pain. On a large scale, his approach to action is so brash and over the top that destruction feels completely cartoonish. But he’s strangely adept at depicting genuine anguish when one of the Transformers is hurt or injured, particularly with the melodramatic usage of human reaction shots to robotic pain. In movies that cost $300 million and skirt around meaningful metaphors for refugees and ongoing, intercultural conflict, it’s odd as hell that Bay seems so interested in finding pathos in the mortal wounds of aliens pretending to be Ford products.

Outside of those disquieting moments of drama, the film’s joys mostly come from the absurd, including John Goodman’s entertaining voice work as Hound, a Transformer we would all gladly follow for a feature length spin-off if anyone at Paramount is reading this. The movie’s “Ancient Aliens” approach to alternate history is pretty cloying, but it also gives us a scene of Bumblebee mowing down Nazis, so it’s like, how can you be mad at that? Anthony Hopkins seems to delight in turning in a hilarious performance as a British guy who knows every plot detail the audience needs in order to keep up, and Peter Cullen continues doing the Lord’s work as Optimus Prime, but even the film’s considerable fun bits never come together to form a functioning whole.

We’re probably going to keep getting more of these movies, so rather than argue against their continued production, may we just ask for them to be a mite more coherent and keep them around the 100-minute mark for run time? Big robots that double as car commercials is too pure an idea for Hollywood to abandon entirely. Let’s just pray they can fine tune the approach a little. Anything based on a Hasbro toy should last closer to Run, Lola Run than Lawrence of Arabia.