Falls into the traps of cliched sentiments and a scatter-brained sense of musicality.

Grand visions of New York City’s twinkling skyscrapers have always inspired the creative mind. From Joni Mitchell’s bright eyed and bushy tailed “Chelsea Morning” to Gil Scott-Heron’s final hour in “New York is Killing Me,” Kevin Morby follows a long lineage of thinkers and dreamers that have taken the city as a source of inspiration. His latest album, City Music, is very obviously inspired by big city living, both specifically in New York City and elsewhere, but therein lies the problem. Morby’s ideas may be grand and heartfelt, his fascination with the multi-faceted beauty of metropolitan life endearing, but City Music very quickly falls into the traps of cliched sentiments and a scatter-brained sense of musicality.

Intriguing elements are presented but quickly dropped. “Come to Me Now,” the album’s downbeat haze of an opener, offers an array of interesting production techniques – from distorted drums to a heaving pump organ and beautiful cascading omnichords – all of which gently float around each other forming a starry skyline. Morby’s vocals have a bit of a disaffected drawl, drawing heavily from the mumbled croon of Lou Reed and the knowing nasel of Bob Dylan. He sounds both desperate and bored, as he sighs, “I can’t wait for that moon to shine/ She’s my friend always been/ You can see it in my eyes/ That I love her/ And she loves me too.”

Those features, however, are quickly abandoned and replaced by the spiky dark humor of “1234,” a clever homage to The Ramone’s three chord scurry. Morby quickly chants, “Joey, Johnny, Dee Dee, Tommy,” before concluding with “They were all my friends and they died,” an allusion to the dark humor of Jim Carroll’s “People Who Died.” That too is jettisoned in favor of “Dry Your Eyes”’s soulful, calm, all strummed chords and a gently lolloping rhythm section that recalls The Beatles’ “Sun King.” Morby’s vocals are bafflingly hard-panned to the right, a choice that, while perhaps harkening back to the early days of stereo mixing, simply sounds off.

At this point, City Music feels a bit disjointed, as if Morby isn’t content with sticking with certain production techniques, let alone songwriting styles. While there is a certain charm to this free-wheelin’ mentality, it forgoes any sense of direction in the process. Morby has previously described the album as a “mixtape,” but that in itself is a cautious line to tread. Even the thematic connective tissue of urban living starts to feel tenuous at best.

This narrative is brought back into the equation through the spoken word of “Flannery,” a fiery description of a setting sun cast against city skyline pulled from Flannery O’Connor’s The Violent Bear It Away that swiftly leads into the album’s title track. Featuring laid back dueling guitars weaving around each other in a delicate fashion, Morby repeatedly croons “Oh, that city music/ Oh, that city sound/ How you pull on my heart strings/ Let’s go downtown.” On the scale of fervent anticipation to repetitive tediousness, Morby leans too far to the latter as the song’s continuously looping riff wears out its welcome and its initially heartfelt sentiment becomes more and more cliched.

However, all of this genre juxtaposition sometimes works, as Morby’s varied past as a young punk – playing in psych-folk band Woods and fronting his own garage rock in The Babies – sometimes pops up in unexpected and delightful ways. “Caught in My Eye,” cast as a traditional folk song, was originally by The Germs, a source of youthful inspiration during Morby’s formative years. Airy backing vocals and slide guitars waft around a dingy bar, Morby’s voice with just the right amount of caution as he gazes across the room. “Crybaby,” with its galloping rhythm and a blink and you miss it burst of noise outro, is a co-write with ex-Babies drummer, Justin Sullivan.

The closing trio of “Night Time,” “Pearly Gates” and “Downtown’s Lights” do their best to turn City Music’s fortunes around. Their cohesive sound and gentle ambience finally provide a solid basis for both Morby’s narrative and his sometimes extensive sonic palette. “Pearly Gates,” perhaps the album’s most musically intriguing song, features a widescreen chorus of angelic choirs and explosive drums, all coming together only to be whisked away by a gentle organ motif.

Morby’s music can be engaging and interesting, but City Music is weighed down by an unfocused approach – an album so bursting with ideas that none are allowed to fully flourish. Cities are, at least in theory, the merging of civilizations in which all walks of life forge a means of cohabitation with one another. Unfortunately for Morby, City Music’s lack of cohesion feels far too disjointed and messy to be fully enjoyable – less serene High Line walk with sunset in tow, more stuck in a continuous rush hour loop. 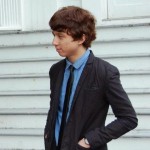