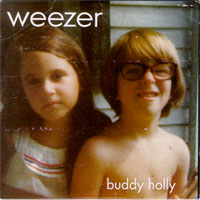 Rivers Cuomo is a (huge) dork. He named his band Weezer, for shit’s sake, and its first record went triple platinum anyway. That album – a self-titled release nicknamed “The Blue Album” – is about as earnest as it gets, as are the songs.

Though “Buddy Holly” isn’t the most earnest track on “Blue,” it’s by far the dorkiest. Ostensibly a song about a romantic interest and Cuomo coming to her defense, the song demonstrates the tongue-in-cheek self-awareness of its writer. The opening lines are a code switch to match the threat (perhaps caused by racial tension), and when Cuomo decides to step up to those confronting his girl, he embarrasses himself.

Meanwhile, the music is power pop heaven with a splash of New Wave keyboards. To match it, Ric Ocasek keeps the production full (and bright!) to give the song the boost it needs to fill the arenas that Weezer seemed predestined to play.

Then there’s the song’s video, courtesy of Spike Jonze. The single was always gonna be a hit (and, ultimately, a large chunk of the band’s legacy that they’d spend the rest of their post- Pinkerton career chasing), but it certainly didn’t hurt to have a forward-thinking director like Jonze on board. Making the song any dorkier is a tall order, so Jonze superimposed the band in Arnold’s Drive-In from “Happy Days” hamming it up for the camera and the kids dancing in the audience. It worked.

Yet, notice the band isn’t dancing. Instead, they’re awkwardly shuffling (as dorks are wont to do) as they play. Notably, the original second line of the chorus was, “Oh, oh, I move just like Fred Astaire,” and thank Christ it was changed. It just doesn’t fit: Rivers Cuomo is a rocker, not a dancer. – Steve Lampiris 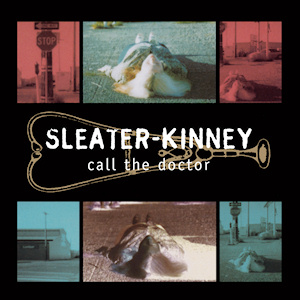 As the most visible members of Olympia Washington’s riot grrrl scene, Sleater-Kinney has always managed to make sharp, unapologetic punk rock that transcends any specific region or provincialism. Their sophomore album, Call the Doctor, is essential listening for not only its ace guitar work from Carrie Brownstein and Corin Tucker but also an incisive and unadulterated take on the gender dynamics of rock music. “I Wanna Be Your Joey Ramone” is one of their early meta masterpieces, a song that pokes fun at the absurdity of rock hero worship that is also worthy of that same level of sycophantic praise.

With Tucker handling the vocals, “Joey” is both an exasperated sigh and a rebel yell. The lyrics are barked and shouted, the word “sung” hardly ever feels appropriate, and you can feel the band’s collective frustration as they rise through the ranks of a male-dominated genre. The song is raucous and riled up, with pounding percussion from Lora Macfarlane and a freeform sense of frustration that belies the band’s tight sonic cohesion and tremendous musical chemistry. Producer John Goodmanson, who also worked with bands like Bikini Kill and Blonde Readhead, captured each track with an inimitable sense of urgency and immediacy.

Even if “Joey” was the only Sleater-Kinney song that resonated with a broad audience, it would still strike a chord for rebuking the patriarchal manicuring of the Pacific Northwest’s music scene, but the fact that it presaged a long, wildly successful career makes it even more noteworthy. Plenty of great rock bands didn’t make it out of the ‘90s, but Sleater-Kinney survived and thrived on the back of sardonic, whip-smart records like “Joey” and their tremendous musicianship. – Grant Rindner