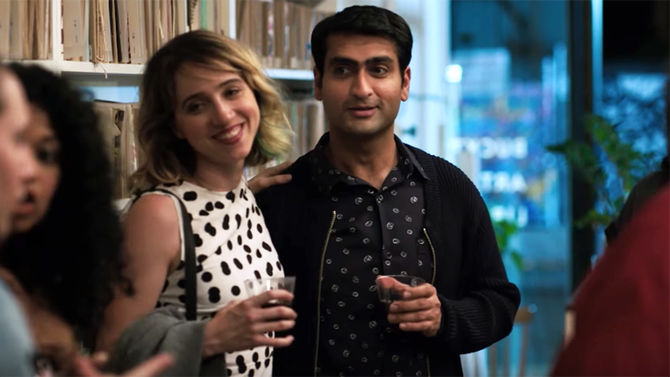 The Big Sick is that rare film that reminds us, through both wry humor and understated poignancy, that life’s most meaningful moments often occur when we veer off script.

Meeting the parents of a significant other carries with it such implicit awkwardness that there’s an entire film franchise dedicated to that conceit. Maneuvering those types of social situations becomes even more unwieldy when different cultural backgrounds get thrown into the mix. The Big Sick takes these romantic comedy tropes and adds some hospital drama for good measure. On the surface, there’s nothing particularly new or fresh about comedian Kumail Nanjiani’s breakout film, but its emotional earnestness, razor-sharp writing and offbeat chemistry of its stars make this film into a hilarious and compelling story about relationships.

With a script written by Nanjiani and his wife, Emily V. Gordon, The Big Sick opens by following the couple’s cute courtship and abrupt breakup. After playfully admonishing her for heckling him during his stand-up set, fledgling Chicago comedian Kumail (Nanjiani) goes home with Emily (Zoe Kazan) for what the two insist will be a one-night stand. Their assertion that they will never see each other again continues over several dates and becomes a running joke as their relationship begins to stretch into months. The problem is, Kumail comes from a staunchly Muslim Pakistani family which practices arranged marriage, and his overbearing mother insists on parading in a series of available Pakistani-American women at their frequent family dinners. When Emily, a white girl, eventually catches wind of this and discovers that Kumail has not even told his family about her existence, things end badly.

As effective as the film is in its first act—Nanjiani and Kazan make an intensely likable onscreen couple—The Big Sick hinges on Kumail forging a precarious relationship with his ex-girlfriend’s parents when Emily is hospitalized with a serious mystery infection. In the absence of local next of kin, Kumail ends up fudging an authorization for the hospital to induce a coma to combat the illness, for which Beth (Holly Hunter) and Terry (Ray Romano) are grateful when they arrive from North Carolina. But unlike Kumail, Emily had told her parents everything about the couple’s failed relationship, and he gets a heavy dose of the cold shoulder from fiery mama bear Beth in particular.

What follows is the development of the film’s most interesting relationship. While Beth is slow to accept Kumail’s insistent presence at the hospital, Terry starts to warm up to him. Terry awkwardly jumps at the opportunity to talk to a real-life Muslim about 9/11 (“What’s your stance on that?”), which leads to one of the most disarmingly funny jokes about terrorism you’re likely to hear. Soon, Beth’s on board with him too, and Kumail is spending downtime with them both at Emily’s apartment, getting nostalgic and a bit tipsy with them and even lending an ear to frustrations about their own relationship problems. The burgeoning affection between Kumail and his ex-girlfriend’s parents, the kind that can only be forged out of enduring trying times together, becomes stronger than the connection he had with Emily, which sets up a dicey situation when she inevitably wakes up.

Though Nanjiani and Gordon have penned a fearless script that tackles thorny issues with sharp wit, it’s the performances that really make the film stand out. Despite her recent criticism of Hollywood always casting her as the “forthright, strong, blah blah blah” mother, Hunter really does bring an infectious mix of tenacity and heart to Beth. Romano nails not only the awkwardness of a middle-aged man meeting the dude who used to have sex with his daughter, but also of a guy from a red state interacting with someone from a politically demonized culture, and he excels in this well-meaning sad-sack role. Moreover, Kazan and Nanjiani make the kind of realistic onscreen couple that’s difficult to find in rom-coms, and they effectively capture the dizzying euphoria of new love, the transparent efforts to play it cool in the face of such excitement and the frustration when real-world concerns inevitably burst the bubble.

With so many think pieces over the past few years about the “death of the romantic comedy,” it’s easy to saddle The Big Sick with outsized expectations to revive an entire genre. That’s a bit unrealistic, especially given that the film is only indirectly about romance. Kumail coming to terms with his own family and their culture, and facing the dilemma of spurning their traditions for the sake of his own happiness, is a crucial subplot to the film as well, and the various family dynamics at play make this much more than a simple rom-com. Ultimately, The Big Sick is that rare film that reminds us, through both wry humor and understated poignancy, that life’s most meaningful moments often occur when we veer off script.