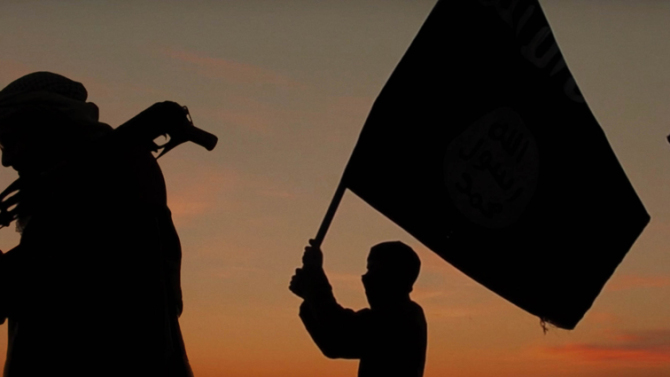 City of Ghosts tells the story of a band of citizen journalists who take on ISIS in the city of Raqqa, Syria after the so-called Islamic State has seized control.

City of Ghosts tells the story of a band of citizen journalists who take on ISIS in the city of Raqqa, Syria after the so-called Islamic State has seized control. Directed by Academy Award-nominated documentarian Matthew Heineman (Cartel Land), the film not only chronicles the lives of the courageous people who continue to bear witness to the atrocities wrought by ISIS, it also serves as an indictment of how narratives are constructed in new and old media.

The film begins at the 2015 International Press Freedom Awards where we are introduced to the members of Raqqa is Being Slaughtered Silently (abbreviated RBSS throughout the documentary), the online rubric the Syrian activists publish under. There we meet the principle members of the citizen journalist collective we will be following: Aziz, Mohamed and Haroud. Because his English is not “so horrible,” Aziz is the RBSS spokesperson. All three men are wearing tuxedos, their brown, bearded faces standing out in the sea of white media elites in the New York City ballroom. They are there to be honored, but a voiceover begins in Arabic. Time and space shifts and we are transported to Syria in 2012.

The event that sparked the Syrian civil war happened in Raqqa, according to Aziz, when 15 children were arrested and tortured for painting anti-Assad graffiti. The rebellion commenced and ISIS invaded with the intention of making Raqqa its capital. The beheadings, oppression and public executions the Islamic State is known for became part of life in the city. RBSS formed when Aziz and his compatriots refused to let the violence go unseen. They wanted to show the world what was happening in their city and set up Facebook and Twitter accounts to disseminate their articles, pictures and videos. The world began to take notice, as did ISIS. Members of RBSS became Raqqa’s most wanted, were tracked down, tortured and executed, yet the movement of citizen journalists continued to endure.

The documentary is structured like an international thriller. Large letters superimpose over shots of cityscapes to tell us we are in Syria or a safe house in Germany or London or NYC. We follow Aziz, Mohamed, Haroud and other members of RBSS who have escaped Syria and manage the group’s website and social media accounts from the outside while the internal members of RBSS feed them information from within Raqqa. The transfer of files from Raqqa to Germany is a race against time as ISIS forces monitor online transmissions and destroy satellite dishes. Heineman uses the same quick cutting visual grammar as a Bourne thriller, but the story unfolding onscreen is more harrowing.

RBSS members move from safe house to safe house. ISIS is on their tail, posting images of their doorways on social media and calling for the radicalized to find and kill them. ISIS recruitment videos – replete with production values and jingoism that put the Pentagon and Michael Bay to shame – depict the execution of RBSS members. Aziz and the others watch, putting names to faces while watching this virtual morgue. ISIS took particular glee in making propaganda out of the execution of Haroud’s father. The use of slow motion and close-ups between the muzzle of a .45 and the blindfolded old man are straight out of Peckinpah, a real life ended through the techniques of constructing fantasies.

Raqqa is Being Slaughtered Silently represents everything good that was supposed to come with the democratization of media. Smartphones and social media allow movements to form organically and spread their messages. The members of RBSS still risk their lives daily to show the world what bulkier news organizations could not: the bloody savagery of fanaticism. But the fanatics have the same tools and bigger budgets. More people seem ready to kill for the distorted religion of the Islamic State than want to die to defend the simple freedoms they should enjoy as humans. But it is not just an ISIS problem.

The black flag of ISIS flutters in the corner of all their media. It becomes a subtle ubiquity in City of Ghosts, like the animated logo of a pirate television station. After the series of terrorist attacks that have plagued Europe since Paris in 2015, life for refugees in Europe has become more difficult. Rightwing nationalist have made them the focus of hatemongering. Mohamed and his wife and friends protest on the sidewalk during a parade of German nationalists. The nationalists shout Islamophobic slogans, threaten the protestors and wave flags. The flags are black with white lettering, Islamophobes and ISIS with an affinity for color schemes. No matter the religion or race, it seems hatred flies under one flag.

The harassment of ISIS forces a meeting of the RBSS members abroad. They decide the time has come to break their anonymity. A montage of media appearances follows where outlets across the world ask for their stories. There is a sense of freedom among the group. Haroud has a child he names after his father. Aziz delivers a rousing speech to the audience at the International Press Freedom Awards. The documentary seems bent on a hopeful note until it ends on Aziz alone in Germany, holding vigil with his smartphone while falling asleep in his chair. It is a powerful image.

In a documentary that explores the construction of media narratives it is arresting. City of Ghosts is a powerful film, yet it adds to the continuous blurring of reality and fantasy. Heineman is telling an important story about what everyday people can do to battle powerful tools with the simplest of available media tools and it is that sense of the importance that makes the final moments with Aziz feel so constructed. Are we watching a character or a man? Perhaps as we all grow into our roles as the media this will be the question that is always pondered but never answered.