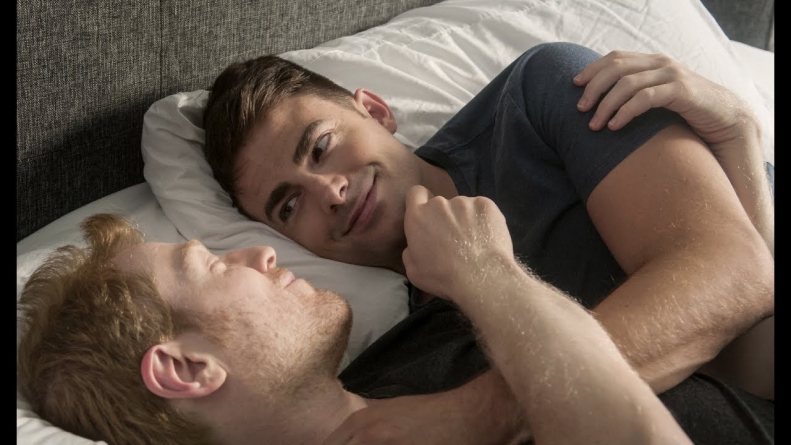 Do You Take This Man Don Kelly

Do You Take This Man tells the story of Daniel and Christopher the day before their wedding. As displayed by his morning coffee ritual, Daniel is the meticulous one and has been doing the wedding planning. Upon introduction, Christopher is kept a bit vague, but that’s his character. He seems like a sweet, jovial guy, but there’s information about his past he parses out on a need to know basis. As one would expect, the secrets and white lies between these two men will all come out during the rehearsal dinner Daniel is preparing for their close friends and family that evening.

As dramedies go, the setup is tried, true and sets the marker on the originality-o-meter fairly low. Nothing that follows in writer/director Joshua Tunick’s script will cause a jaw to drop. In fact, when the characters speak about topics like family, devotion and gay marriage they often sound like they’re regurgitating a paragraph from the most recent article they’ve read. Even those secrets and lies are kept fairly innocuous and understandable when finally brought to light. Even when the drama reaches its apex, such as it is, there is never any sense that the stakes are high enough for the nuptials to be in any danger. All Daniel and Christopher need to do is retire to separate safe spaces with their besties and hash things out. Hashing things out is really what the movie is all about.

While the script is standard and the direction uninspired, the acting is excellent. Anthony Rapp and Jonathan Bennett are affable and charming as Daniel and Christopher. Thomas Dekker and Hutchi Hancock are excellent as Christopher’s best friends and confidants. Lee Garlington and Sam Anderson bring a welcome veteran presence as Daniel’s parents with Anderson turning a rather cliché monologue about his son coming out into a tearjerker of a scene. As Daniel’s dear friend Jacob, Mackenzie Astin steals the movie. His scene with Dekker, flirting, hiking in Griffith Park and commenting on their new right to marry, is as good as this movie gets. Alona Tal does capable work as Emma, the surprise dinner guest, and Alyson Hannigan does her thing as Daniel’s brokenhearted sister.

One can only hope that we’re not too far away from a society that will embrace comedies and dramas about gay couples and that those films reinvigorate their respective genres. Do You Take This Man will not be remembered as one of these films. It is more like an acting exercise; the heart and commitment it took to make it is evident but ultimately the film is doomed for obscurity on your Netflix recommends list.