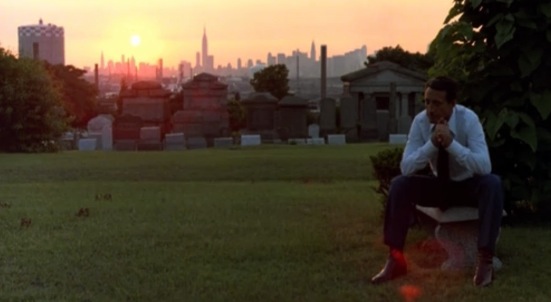 Suspense tropes that Demme would tweak to much greater effect in Silence of the Lambs just don’t come off here.

In his first feature outside Roger Corman’s exploitation factory, Jonathan Demme began to find his voice as a director. The 1977 film Handle with Care, originally released as Citizen’s Band, looked at a community on the fringes of society (not unlike the women in prison of Caged Heat or the crime family of Crazy Mama) and found flawed, humane characters longing for a connection. Paramount liked the movie so much that it opened it in 700 theaters, but after dismal box office returns, the movie was withdrawn after three days for retooling. Even after a successful rerelease at the New York Film Festival, the movie never found a commercial foothold. Then Demme made a Hitchcock pastiche. Despite Oscar nominee Roy Scheider and classic Hollywood composer Miklós Rózsa (Ben-Hur, Double Indemnity), the director’s next feature, the 1979 thriller Last Embrace, was a step backward.

Scheider plays Harry Hannan, a government agent working for an unidentified agency. As the movie opens, he’s having a drink with his wife in a remote Mexican cantina; unfortunately, it’s not remote enough to escape the colorful gunmen who kill his wife in a botched attempt on Harry’s life. Harry returns to New York a damaged man prone to anxiety attacks, convinced someone is trying to kill him. Upsetting his life even more is the fact that his old apartment has been rented out to Ellie (Janet Margolin), a doctoral student working at the Museum of Natural History. The seemingly prim young woman gives Harry a letter left behind for him, and its message, written in Aramaic, sends the agent and his new friend on a search that leads to an orthodox Jewish community and a startling twist.

Demme told The New York Times that, “There are no noticeable homages to anybody in this film,” explaining that the director’s Hitchcockian onscreen cameo as a train passenger was made because the production ran out of extras. But Demme was clearly being tongue-in-cheek; there are scenes in Last Embrace that would not exist without Vertigo and North by Northwest. Yet to his credit, Demme toys with familiar tropes; when fellow agent Dave Quittle (Demme regular Charles Napier) follows Harry into Central Park, a street musician is cleverly placed between them, one of several street performers who appear throughout the film playing a variation on Rózsa’s lush theme.

But the movie’s talent pool is for the most part uninspired. Scheider’s anxiety attacks seem forced, and Margolin can’t smooth out a script that requires her character to make the ridiculous shift from mousy student to split-personality hooker. While it’s a treat to see a baby-faced Christopher Walken in a small part as an agency administrator (blink and you’ll miss Mandy Patinkin and Max Wright as train commuters), the most entertaining performance here may be from John Glover as a foppish Princeton academic whose wavy hair somehow conveys his arrogance as much as his expressions.

Last Embrace most comes to life when it immerses us in the synagogues of the Lower East Side—the kind of misfit community that the director was so fond of. Demme was not fond of this movie, and you can tell that his heart wasn’t into it. In an interview with Michael Bliss and Christina Banks reproduced in their Demme study, “What Goes Around Comes Around, the director admitted, “I was kind of wallowing in style. I went into that movie thinking, okay, here’s a Hitchcockian thriller, and a lot of energy went into style more than content.”

Suspense tropes that Demme would tweak to much greater effect in Silence of the Lambs just don’t come off here, and the leads never generate romantic sparks. But the movie is not without its minor pleasures. Last Embrace has never had a good reputation; such critics as The Washington Post’s Gary Arnold and The New York Times’s Vincent Canby, who liked the film more than most, forgave its flaws. It was almost as if their admiration of Handle with Care made them give the director a pass in the hopes that he’d find a better property next time around. In fact, Demme’s next film would be his great breakthrough.