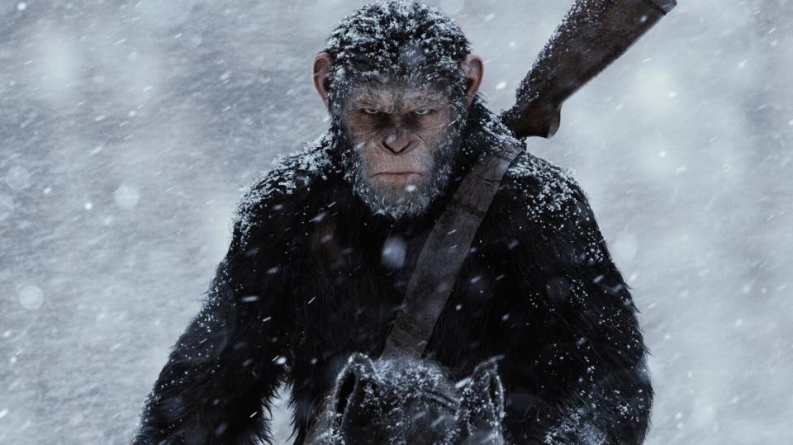 Combines aspects of The Great Escape with films that deal with genocide for an experience that may be a little too heavy for its own good.

War for the Planet of the Apes David Harris

The rebooted Planet of the Apes series has been a surprisingly strong and thoughtful blockbuster treat, an unlikely trio of popcorn flicks that pose deeper questions amidst the requisite scenes of violence and destruction. Since its inception in 2011 with Rise of the Planet of the Apes, the trilogy has evolved along with its titular primates, picking up with War for the Planet of the Apes this summer. Grim and relentless, War combines aspects of The Great Escape with films that deal with genocide for an experience that may be a little too heavy for its own good.

Much of the story follows Caesar (Andy Serkis), the chimp protagonist from the prior films, as he wanders through a frozen, mountainous wasteland with a group of other apes in search of an Army base. Fueled by revenge, Caesar is looking for a nameless colonel (Woody Harrelson) who is not only dedicated to wiping out the apes for good, but runs a concentration camp on the backs of simian labor. Along the way, Caesar and his friends encounter a young human girl who is stricken by a sickness that makes her mute, and they take her along with them. But the journey is only half the story. When the Colonel enslaves Caesar, War for the Planet of the Apes becomes a brutal struggle for survival, one that many of the story’s principal characters won’t survive.

But what is the movie ultimately driving at? Is it that the militaristic apes have essentially become humans with their warlike nature? Not really. Caesar and his group simply want to be left alone for a chance to live in peace. The film begins with an explosive battle scene where Caesar proves that he still believes in mercy. However, that decision ultimately costs him some apes that are dear to him when the Colonel infiltrates Caesar’s hideout and shoots his son and wife.

For its first two acts, War for the Planet of the Apes is a stirring, even deeply affective, meditation on freedom and identity. Along the way, Caesar and his friends encounter Bad Ape (Steve Zahn), a broken-down chimpanzee taking refuge in an abandoned ski lodge. Even as the film’s comic relief, Bad Ape’s story as a former zoo animal beaten by his human handlers is colored by a tragic tone. Yet, when the film leans on jailbreak clichés in its final act, War for the Planet of the Apes gives up and surrenders to the clarion call of summer blockbuster mediocrity.

In many ways, this new trilogy bests the original Apes films by adding heavy doses of realism. Harrelson’s ham-fisted performance may rival Charlton Heston’s teeth-gnashing, scenery-chewing from the original, but the motion-captured apes look amazingly real and convincing, much more so than Roddy McDowall in a chimp suit. However, there is no lightness this time around. War is hell, so they say, but besides some laughs at the expense of Zahn’s character, we may as well be watching Schindler’s List. That is all fine and good, but don’t try to blow away such a glowering version with explosions and slow-motion escape sequences at the end.