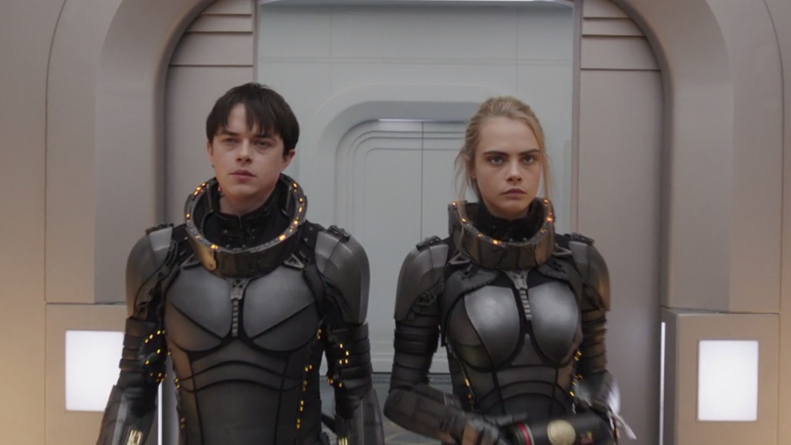 A city of a thousand planets shouldn’t end up feeling so hollow and lifeless.

Valerian and the City of a Thousand Planets Josh Goller

Valerian and the City of a Thousand Planets can claim a certain immunity against accusations that its far, far away galaxy-building hews too closely to Star Wars; George Lucas borrowed liberally from the space opera of Valérian and Laureline, a French comics series which predated his original film trilogy. Director Luc Besson uses every inch of goodwill in that regard (our heroes even end up escaping into a garbage chute at one point), as he creates a visually dazzling spectacle populated with strange creatures that would fit right in if they saddled up to the bar at the Mos Eisley Cantina. Armed with a hefty production budget—much of which was, remarkably, crowd-funded, making this the most expensive indie film of all time—Besson spares no expense in production design, so much so that actual plot is largely beside the point.

In the distant future, Major Valerian (Dane DeHaan) and Sergeant Laureline (Cara Delevingne) make their way to Alpha, a gargantuan space station where all the intelligent lifeforms from the “four corners of the universe” converge to share knowledge and culture. These two soldiers of the United Human Federation are tasked with retrieving an extremely valuable stolen creature, the last of its kind, from a slightly Hutt-esque space pirate (voiced by John Goodman). After slipping into a parallel dimension to snatch it, they bring the cute little guy to the intergalactic metropolis, which operates under Commander Arün Filitt (Clive Owen), who never seems especially trustworthy even before he’s promptly kidnapped. Further complicating matters is that Valerian—a supposed ladies’ man whose early, out-of-the-blue marriage proposal to Laureline is rebuffed—has a weird vision about an apocalypse on a once-utopic beach planet populated by a group of mystic aliens who harness the power of magic pearls and who seem to be tied to a dark force that the military claims has infiltrated Alpha and is growing like cancer.

With a glut of splashy chase scenes interspersed with sequences of heavy-handed exposition, and with only marginally interesting characters blurting out stultifying one-liners (“Help me find Valerian or this bullet will find you” not even being the worst of the bunch), Valerian grows tedious long before its two heroes inevitably save the day and bring their tempestuous Han-and-Leia-like courtship to fruition. DeHaan and Delevingne seem miscast and display no believable chemistry, appearing wooden when acting alongside the likes of Ethan Hawke (as an eccentric space pimp) and even Rihanna (a shape-shifting dancer who helps them on a rescue mission). And despite the film being propelled to some measure of success due to its impressive visual effects alone, the humans onscreen routinely end up looking somewhat silly in their elaborate costumes when appearing next to the far more impressive alien eye candy.

If it wasn’t for the original French comics, neither Star Wars nor Besson’s own The Fifth Element would exist in their current forms. It’s a pity that, without offering stronger writing or compelling characters, the film adaptation collapses under the weight of its own world-building. A city of a thousand planets shouldn’t end up feeling so hollow and lifeless.