The Kickback provides the coping mechanisms of bitter humor and powerful music as a measure of solace before grief is resolved.

The personality of Chicago-based rock band The Kickback can be summed up in the first few seconds of “Will T,” the opener of its sophomore record, Weddings & Funerals. The song instantly bombards us with hysterical, obnoxious laughter. It’s the sonic equivalent of a “forever alone” meme: funny, but also tremendously depressing if you think about it for too long.

Sarcastic, tongue-in-cheek lyrics and upbeat grooves have defined the Kickback since its 2015 debut Sorry All Over the Place; typical of that album’s successes was “Sting’s Teacher Years,” which is about exactly what it sounds. Weddings & Funerals is tighter, tougher and more focused, thanks partly to production by Dennis Herring, who has worked with the likes of the Walkmen, Modest Mouse and WAVVES. But the record’s narrower lens owes itself to real events that inspired it. Lead singer and guitarist Billy Yost calls the album his “one-sided view of someone trying to work through a divorce.”

You could call Weddings & Funerals a breakup album, but it’s not as simple as that. When a relationship ends, there are inevitable fluctuations of anger and sadness, relief and disappointment and confidence and insecurity. While channeling each of these emotions lyrically, the album provides pop punk-inspired choruses, heavy guitars, crashing cymbals and even a few lasers sounds, the buoyant music a stark contrast to its often mournful subject.

The trajectory of post-marital malaise is summed up in in an almost too fast 30 minutes, and the grief never feels like it ends completely. Yost has explained that writing about the breakup of his marriage did not give him the necessary catharsis, and this shows on songs that seem to come from someone who has not yet made sense of their feelings. Songs seem to progress through Kübler-Ross’ stages of grief. “Vision Board” represents depression and obsession as Yost desperately shouts, “I made a vision board/ It’s just pictures of you,” and sadly acknowledges on top of a grumbling bass, “I’ve lost my faith, my dignity, about 15 pounds.” “Dating Around” is angry, but melancholy peeks through with funereal organ timbres marking a relationship that’s over. “Hotel Chlorine” is the bargaining stage, as Yost offers to get a new voice or a new smile before he chillingly snarls, “I could be your swim mate/ I could be your slave.” Finally, on closing track “Latest Obsession,” Yost begins to take ownership over the relationship’s demise, although he doesn’t completely accept it. After a chaotic and clanging drum solo introduction, he admits, “Every time you said it would be alright/Well, I should have realized you talked to yourself at night.”

Halfway through the album, “Pale King” shows Yost at his most insecure and vulnerable. It is the Kickback’s second allusion to the late author David Foster Wallace (the title of its first album referred an obscure footnote in Infinite Jest). Named after book Wallace was working on before he committed suicide, “Pale King” features the happiest of handclaps, but its lyrics express the most relatable post-breakup hopelessness, a sadness so specific that it feels universal. The song’s every line is memorable and crucial, and it closes with the truly gutting, “Learned how to love, but I think I’m born to hate,” Yost repeating the line calmly at first, but slowly escalating in volume and growl until he becomes inarticulate, droning horror movie-like effects interrupting his hysterics. It ends with what sounds like Yost waking up from a bad dream, taking a deep and heavy in-breath that he never releases. If Weddings & Funerals is a breakup album, it’s one that never allows us any reprieve from heartbreak. Still, the Kickback provides the coping mechanisms of bitter humor and powerful music as a measure of solace before grief is resolved. 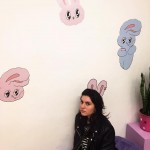 Natalia is a very chill New York-based writer and student at NYU Gallatin, where she concentrates in journalism, music, fashion, gender and sexuality, and pretty much whatever her indecisive heart desires. She has written for Paste, Interview Magazine and Out Magazine. You can do her a favor and follow her on Twitter (@imnataliab) to provide her with the false sense of validation she desperately craves.