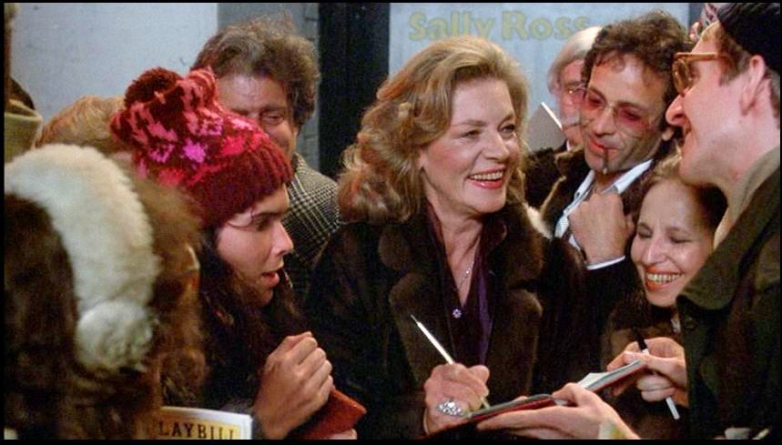 It may seem like we have always been obsessed with celebrity, but there was a time when the preoccupation with movie stars and other luminaries seemed not just unhealthy but dangerous. The 1981 thriller The Fan comes from that seemingly more innocent, less celebrity-saturated time.

The feature debut from director Edward Bianchi, who has previously specialized in television commercials, the movie follows a young fan’s increasingly unhinged obsession with Sally Ross, an aging actress whose career as described in the film echoes that of the actress who portrays her: Lauren Bacall. Despite a strong performance from Bacall and some delicious musical numbers co-written by Marvin Hamlisch, the film was poorly received upon its initial release, in part due to an unfortunate resemblance to real life.

Douglas (a young Michael Biehn, who went on to a celebrated role in Aliens) works in a Manhattan record store where he seems out of step with his fellow employees. In one scene, the shop is playing The Specials’ “Do the Dog” while his co-worker Dana Delany sports vaguely new wave hair, in contrast to Douglas’ more straight-laced wardrobe; his bug-eyed fandom seems a more sinister iteration of Carl Boehm’s lonely photographer in Michael Powell’s Peeping Tom. Douglas has tastes that are indeed unusual among his peers; he writes gushing fan letters to Ross (Bacall), whose increasingly erotic overtones seems like a danger sign to Ross’ secretary Belle (Maureen Stapleton), who handles’ her boss’s fan mail.

After Belle sends Douglas a curt reply to a sexually provocative letter, the fan takes matters into his own hands. To a pulsing, Jaws-in-the-New York subway score by Pino Donaggio (a Brian DePalma favorite), Douglas attacks Belle with a straight razor, and Ross and her circle (including supportive ex-husband James Garner) finally begin to take this fan seriously.

What makes this horror movie stand out in what was then a highly saturated playing field is that its occasional gore is tempered with…the making of an imaginary Broadway musical. Ross is in rehearsals for a show called Never Say Never, and the movie’s horror tropes are accompanied by a different kind of anxiety: that of a veteran actress trying to get her sea legs back. The self-referential script mentions a photograph in which Ross is vamping on a piano for President Harry Truman—perhaps one of the most iconic images of Bacall. Ross is a mid-career professional taking a risk on a Broadway musical, which in fact mirrors Bacall’s then-Broadway resurgence in Woman of the Year.

The musical numbers are pretty fabulous, and in one of the film’s few good notices, The New York Times’ Vincent Canby applauded the movie’s backstage portrayal of a Broadway show. You get to see Bacall rehearsing such delightfully cornball lines as, “I’ve had enough champagne” as Police Inspector Raphael Andrews (Hector Elizondo) looks on in awe. (Unfortunately, no soundtrack album was ever released.)

The movie turns the tables on the “psycho-biddy” subgenre in which aging actresses resorted to playing deranged horror-movie villains. While the undisputed masterpiece in this vein may be Robert Aldrich’s 1962 drama What Ever Happened to Baby Jane?, starring not one but two aging icons in Joan Crawford and Bette Davis, The Fan gave the veteran Bacall the chance to demonstrate an inner strength while a younger generation loses its mind.

Alas, life imitated art in a way that tainted the film. The Fan was released just months after a deranged fan shot and killed John Lennon in front of the Dakota Apartments—which happens to be where Bacall was living at the time. The movie was a box-office bomb, and Bacall expressed disappointment that the arc of the veteran actress was overwhelmed by the script’s violent aspects. But perhaps the two are not so far apart. As Douglas closes in on his Broadway prey, The Fan ramps up the horror movie tropes just as it ramps up the Broadway schmaltz of the finished show. This suggests that the line between Grand Guignol and American Musical Theatre is not so marked as we think.