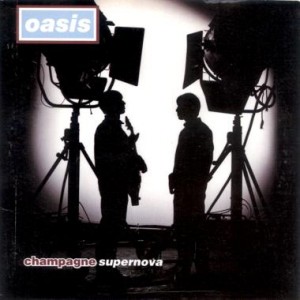 The Gallagher brothers have been behaving like petulant 25-year-old rock stars for so long that it’s hard to remember a time when their rambunctious behavior could be attributed to youth or ignored for the sake of good music. But back in the mid-‘90s, Oasis was deservedly omnipotent, and while “Wonderwall” gets the most casual attention from its seminal second record, (What’s the Story) Morning Glory?, “Champagne Supernova” is more subtle and enduring.

The last single released from the album, it was a bigger hit in the United States than in the U.K. In Britain, (What’s the Story) spawned four number one or number two hits, but “Champagne Supernova” barely cracked the chart, reaching a high of 100. The video has worked its way into the cheesy ‘90s canon with its nauseating array of transition effects and zooms, a seven-and-a-half minute spectacle featuring a lifetime’s worth of shots of Liam Gallagher dressed like Steve Jobs staring dreamily into the camera.

Though there’s not much logic holding together the lyrics – what is a champagne supernova, anyway? And lines like “Slowly walking down the hall/ Faster than a cannonball” seem just stunningly oblivious of their dissonance, it works as a snapshot of Oasis that has only grown more poetic with hindsight. It’s about the accelerated life cycle of a transcendent band that achieved success with its follow-up, Be Here Now, but its star never shone as brightly.

Noel Gallagher’s infectious solo is ultimately drowned out by the wall of rhythm guitar and percussion. What makes “Champagne Supernova” such a powerful song today is that its mix of beauty and nonsense feels like the perfect distillation of the meteoric rise and slow, sad fall of one of Britain’s great ‘90s bands. – Grant Rindner 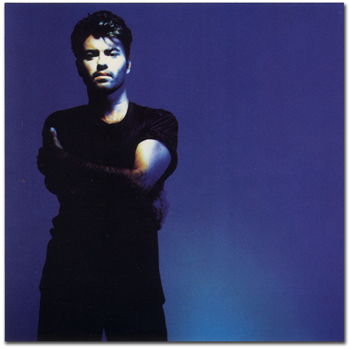 By 1990, George Michael had already had two careers: as half of the popular music duo Wham! and as an insanely successful, sexy pop artist. His debut solo album, Faith, had debuted at number one in his native England and in the United States and won him two Grammys. But by 1990, Michael, who had been working nonstop for nearly a decade, was tired. In particular, he was tired of being seen as just another attractive performer. He wanted people to love his songwriting as much as they loved his style.

This led to Michael’s sad but yearning second solo album Listen Without Prejudice Vol. 1. Despite the painfully self-conscious title, it’s filled with beautiful, sensitive songwriting, lyrics and music painting a melancholy picture of a brilliant but isolated man. While several tracks made a lasting impression, none was as strong as the album’s third single, “Freedom 90.”

The “90” distinguishing it from the Wham! hit “Freedom,” Michael’s solo smash exemplifies his need to be taken seriously and his cynicism about fame and the music industry. Despite his good looks and incredible wealth, he sings, “Gotta have some faith in the sound/ It’s the one good thing that I’ve got.”

Much of the song’s staying power comes from a music video directed by a young David Fincher and starring a variety of supermodels. Michael, in keeping with his album’s thesis, was tired of fame and of being ogled by the public, so the supermodels (including Linda Evangelista, who famously took a lot of convincing) lip-sync his lyrics. Inspiring such popular videos as Britney Spears’ “Piece of Me” and Marc Ronson and Amy Winehouse’s “Valerie,” this casting reflected Michael’s perhaps ironic view of the industry: that beauty comes before talent. George Michael, of course, had plenty of both. – Mike McClelland 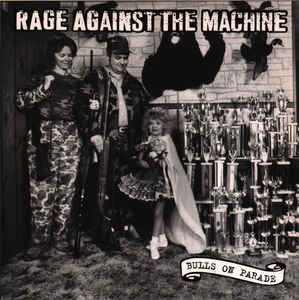 Rage Against the Machine was not one for subtlety. The group excelled at intros that told you exactly what fresh hell it was fighting. But nothing in its catalog, and perhaps nothing in the ‘90s period, matched the primal scream of “Bulls on Parade.” That two-note, brutalist funk the sort of all-conquering sound that documents glass shattering and a city boiling into a riot. Fitting, as Zack De La Rocha’s lyrical knives stuck directly into war mongers who would rather build bombs than fund schools. “Weapons, not food, not home, not shoes/…I walk from corner to the rubble, that used to be a library,” he rasped.

Rocha was an undervalued rapper until his recent renaissance with Run the Jewels, but his vicious flow here would go on to influence fellow pissed-off social MCs like Talib Kweli. Particularly with the modern conservative movement preaching the moral high ground while continuing to pursue two decade-plus wars, Rocha’s growl of “they rally ‘round the family, with a pocket full of shells,” points out the wolves among the sheep.

Perhaps its most political statement was the timing. In the post-Cold War years, it was easy enough for middle and upper class folks in the United States to think the world had shifted to a natural order. The economy was booming, there were no major wars, it seemed like paradise. Except of course the niggling signs of decay that came from the L.A. riots and covert military operations like Black Hawk Down. With “Bulls on Parade,” RATM diagnosed a crippling sickness that had always been within America, but didn’t affect enough rich, white folks to matter in the ‘90s. Then came decades of war under Bush and Obama and our current farce of an administration. The ship was sinking; we were too distracted to hear it groan.

As the future of never ending wars loomed, the identity of the “bulls” became clearer: it’s the military industrial complex rushing into conflict like stubborn cattle, and the bull markets that benefit from bloodshed. As Rocha screams the title, there’s no doubt what the parade in his mind is. A street filled with fire, and the bulls cut of their horns, strung up for their crimes. In a current climate where subtlety is dead, with no one to mourn for it, “Bulls on Parade” has only become more revolutionary. – Nathan Stevens 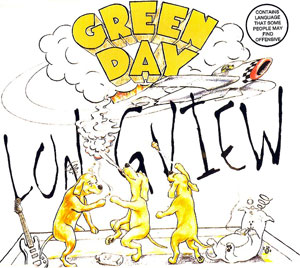 Green Day’s third album, Dookie (1994) was filled with universally relatable teenage angst of every flavor. And it took this song about what may be the most relatable teenage endeavor of all—masturbating—for the band to finally break out.

There are a lotta songs about jerking off, but “Longview” might be the most fun and the most honest. Mike Dirnt’s bassline slinks around Tre Cool’s robotic shuffle during the verses, acting as the build-up, while Billie Joe Armstrong gives a live report of self-loathing and ennui from an otherwise empty living room: “I sit around and watch the phone, but no one’s calling/ Call me pathetic, call me what you will.” Then, the metaphoric explosion of a chorus, in which Armstrong experiences a few seconds of bliss (“Bite my lip and close my eyes/ Take me away to paradise”) before starting the process again. After three subsequent metaphors, Armstrong ends the song asserting, “Some say quit or I’ll go blind/ But that’s just a myth,” and the song fades out like it began as if he’s testing this theory.

After the runaway success of Dookie, Green Day was free to do pretty much whatever they wanted. So they did: their punk aesthetic expanded to include saccharine balladry and album-length capital-S Statements with mostly worthwhile results. But it’s their style of hook-first punk, especially on “Longview,” that gave rise to the pop-punk craze of the ‘00s. It shouldn’t be a surprise, then, that Fall Out Boy, the genre’s biggest band, inducted Green Day into the Rock and Roll Hall of Fame in 2015. “This is a band that’s so in tune with their audience, they let a random kid on stage and play in the band,” said Pete Wentz. Green Day still does that at their shows, and they do it for “Longview”. For that lucky fan, I imagine those few moments are paradise, too. — Steve Lampiris 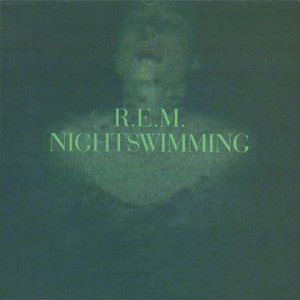 Nestled between the mandolin strings of Out of Time (1991) and the amped-up guitar licks of Monster (1994) is the staid melancholy of Automatic for the People (1992), an album that meditates on existential sorrow with clear eyes and blooming orchestration. The string arrangements – many of them composed by Led Zeppelin bassist John Paul Jones – dignify quotidian sufferings, transposing them to something more majestic. From symphonic drama in the back half of “Drive” to the rise of violins in “Everybody Hurts,” the accompaniment is cinematic, redemptive. “Nightswimming” lends needed light to the album, quietly shimmering as an introvert’s ballad about “recklessness and water.”

The symphony is an intimate group – a handful of instrumentalists tune up at the intro before Mike Mills commences the song’s cyclical piano motif. You can hear Michael Stipe taking in a breath before the verse; everything is close. “Nightswimming/ Deserves a quiet night….” He’s poignant and lucid here, his poetry swelling with slow tides of nostalgia and longing. Photographs, streetlights, moons and inky water, Stipe‘s lyrics bargain between remembering and forgetting. “September’s coming soon” evokes an aching awareness of the moment, and allow its passage.

“Nightswimming” is essentially a duet between Stipe and Mills, the orchestral scoring swaying underneath the latter verses and unfolding into plaintive interludes. Stipe’s vocals, in keeping with the theme, stand naked. With only Mills’ piano behind him at first, even his diction is emotionally purposeful: the way he sings the word “water” is so placid and pure. The cadence of the verses – short phrases that stretch out into sustained syllables – mirrors the long bowing of strings and the metaphorical pull of a (night)swimmer’s stroke.”I’m pining for the moon/ And what if there were two/ Side by side in orbit/ Around the fairest sun?” The piano progression recycles, and the beauty resides not in a wish fulfilled, but in its contemplation.

Debates continue about which was the last “great” R.E.M. album (was it Automatic or do you extend through New Adventures in Hi-Fi?), but among fans both super and casual, “Nightswimming” is almost universally regarded as one of R.E.M.’s finest compositions. For a band whose purpose was more often to be politically illuminating, it strips down, glowing by the light of “that bright, tight forever drum.” – Stacey Pavlick