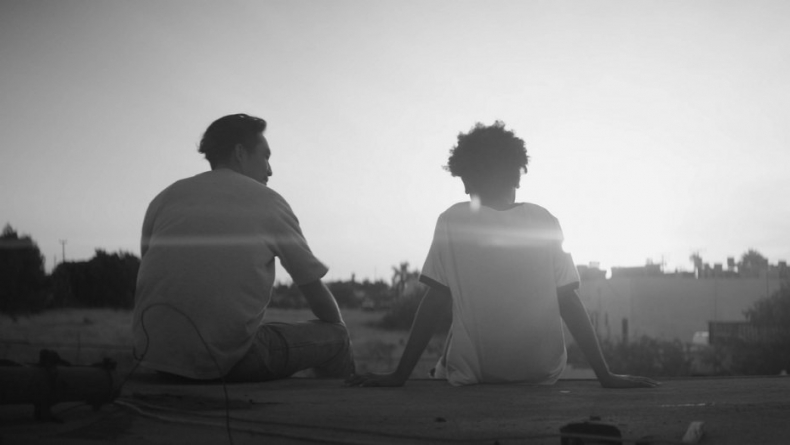 Gook is a distinct, affecting effort whose staying power offsets its structural problems.

Writer-director Justin Chon’s provocatively titled Gook is set during the 1992 Los Angeles riots, but it has more on its mind than systematic injustice. Unlike Kathryn Bigelow’s brutal, horror-streaked Detroit, the inciting violence takes place offscreen. Gook is about the people living through the riots. Set in a predominantly Latino and Asian-American neighborhood adjacent to South Central, Chon’s film boldly uses the King riots as a backdrop for a story about two Korean-American brothers who run their father’s old shoe store. It deftly avoids any risk of becoming a tone-deaf “All Lives Matter” product, though; there are several prominent black voices in the narrative, and Chon portrays racial struggle as necessarily unique to the group experiencing it. This nuanced approach helps free the film up from explaining its politics so it can get to the work of down-and-dirty storytelling. While it succumbs to laziness in its final act, for the most part, Gook is a distinct, affecting effort whose staying power offsets its structural problems.

Shot in stark, unblemished black-and-white, the film centers on brothers Eli (Chon, lightyears away from his tenure with the Twilight saga) and Daniel (YouTube personality David So) and their friendship with the young Kamilla (relative newcomer Simone Baker). It takes place over the course of a single day, at the outset of the King riots, and is set mostly in and around the shoe store that the brothers inherited from their father. Kamilla is one of the few black people in her neighborhood who isn’t skeptical of Eli and Daniel, so she cuts school often to come work for them in the store. Eli is laser-focused on carrying forward his late father’s legacy, though he’s not entirely sure what that means. Daniel wants to be an R&B singer and spends his time writing potential lyrics and melodies for a demo tape. A series of vignettes are woven together into a humane portrait of aimlessness, near-poverty and the complexities of family, before the dominoes are violently set in motion for a slightly overblown finale.

One department where Gook really succeeds is in squashing cliché. Daniel’s musical dreams aren’t blown up to 8 Mile size. The racial tightropes these characters walk are inherent, buried enough in their lives that they don’t need to talk about them, but there’s real, unsentimental poignancy to a moment where Eli explains the origins of the movie’s titular slur to a curious Kamilla. He doesn’t follow up the explanation with a metaphor or attempt to comment on how its wartime origins relate to their current circumstance. Chon knows how to pull techniques and story elements like well-worn trinkets and restore them to a unique new luster. In a strange way, its tonal uniqueness and L.A. setting brings to mind Sean Baker’s Tangerine. Gook is less overtly comedic, but its unflappable sympathy and clear-eyed narrative approach makes it an unexpected kindred spirit.

The performances, too, are fairly sterling. A handful of players are noticeably untrained, but this contributes to the film’s grounded atmosphere more than anything else. Baker in particular is magnetic, her ebullient spark more than enough to close the several-decade generation gap between her and most of her scene partners. In a small number of surreal, experimental moments (capably handled by cinematographer Ante Cheng), Baker dances to a tumbling rhythm, and her utter abandon wordlessly becomes the emotional center of the entire film.

Unfortunately, Chon’s script opts for obvious, easy tragedy to cinch things up. After a telegraphed not-quite-reveal, the stakes spike, and the inevitable violence rains down without too clear a stance or comment. It’s disappointing given the assuredness of what comes before, but it’s not enough to erase the film’s most striking and affecting moments. Instead, it feels like a case of a filmmaker opening the emotional floodgates just a couple notches too wide—perhaps the best kind of mistake to make in a movie with a subject as delicate as the one in Gook.

Conner's just a guy from the Pacific Northwest who thinks about movies a lot. He lives in Boston, studies journalism and spends most of his time trying to figure out how exactly he's supposed to feel about Josh Groban.