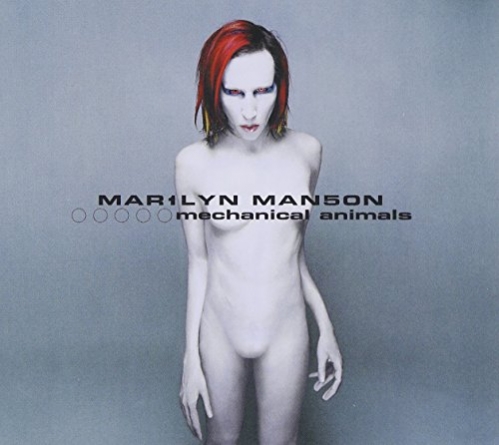 Marilyn Manson’s first two outings, 1994’s Portrait of an American Family and 1996’s Antichrist Superstar, were scathing indictments of social conservatism in America served up in a purposefully abrasive industrial metal lunchbox thanks to Trent Reznor.

Antichrist in particular opens with an enraged sprinter called “Irresponsible Hate Anthem” and features the shock-value chorus, “Everybody’s someone else’s nigger/ I know you are, so am I/ I wasn’t born with enough middle fingers/ I don’t need to choose a side”. The album became the band’s breakthrough, debuting at number three on Billboard. But with notoriety came pushback: the accompanying Dead to the World Tour was protested at many stops by Christian groups, and the band was targeted by Congress for their allegedly negative effects on young listeners.

Rightfully, the band could’ve worked with Reznor again to make an even more visceral and acerbic follow-up to Antichrist as a response to the outcry. Instead, they hired producer Michael Beinhorn, who at the time was perhaps best known for working on Soundgarden’s Superunknown. The result was 1998’s Mechanical Animals, a fun, danceable glam rock record covered in high-sheen studio gloss.

But it wasn’t a retreat, for Mechanical is actually more subversive than its predecessor. Manson didn’t tone down his rhetoric; he simply repackaged lines like “Rock is deader than dead/ Shock is all in your head/ Your sex and your dope is all that we’re fed/ So fuck all your protests and put them to bed” in technicolor candy coating. The stylistic change is immediately apparent. Antichrist violently whips around at the outset, while Mechanical’s “Great Big White World” creeps in on pale keyboard twinkles and skittering electronics. When guitars finally arrive, Manson offers another societal critique: “Because it’s a great big white world/ And we are drained of our colors/ We used to love ourselves/ We used to love one another”. This time, however, subtlety and consideration replace knee-jerk extremism and gleeful goading.

A brief side-note: Antichrist, Mechanical and 2000’s Holy Wood (In the Shadow of the Valley of Death) form a story triptych, but for the purposes of this piece the overarching narrative is being set aside in favor of viewing those albums as individual statements.

While Manson’s penchant for wordplay-for-its-own-sake lyricism is intact here (“You were my mechanical bride/ You were phenobarbidoll/ A manniqueen of depression,”) it’s important to note that he was also rather prescient. Use a little imagination and he predicts multiple current trends in culture: dating apps (“Use me like I was a whore/ Relationships are such a bore/ Delete the ones that you’ve fucked”), the opioid crisis (“A pill to make you numb/ A pill to make you dumb/ A pill to make you anybody else”), recreational outrage (“Pitifully predictable/ Correctly political”) and the narcissism of selfie culture (“Look at me now/ I’m so vacant/ Look at me now/ I was a virgin/ Look at me now/ Grew up to be a whore.” Think of it this way: if OK Computer was a New York Times thinkpiece on what lies ahead in a digital world, Mechanical was a series of TMZ posts on how trashy society is and will become.

Manson, of course, has expertly trafficked in trash culture for most of his career (although having a later single called “Arma-goddamn-motherfuckin-geddon” might be a bit too on-brand even for him), and Mechanical is a gold-toothed “fuck you” to critics and protesters alike. This is perhaps best expressed in the music video for the album’s final track, “Coma White.” Released after, and in spite of, being blamed for the Columbine massacre, the clip shows a reenactment of JFK’s assassination with Manson and then-fiancée Rose McGowan playing JFK and his wife, respectively. Oh, and because it’s Marilyn Manson, his agitprop JFK comes complete with a faux-crucifixion. But hey, if you’re gonna go after social mores, you may as well aim for the sky.

Steve Lampiris is a freelance writer in Milwaukee, WI. He's been writing about pop culture for 10 years, having started at the Badger Herald in college. After graduation, he moved on to the London-based blog The Line of Best Fit in March 2009, where he still contributes. He also writes for the Shepherd Express, an alternative newspaper in Milwaukee. Occasionally, he writes jokes for his own amusement. He shares a birthday with Marilyn Manson and Charlie Rose, the polarity of which is oddly fitting. He can be found on Twitter at @stevenlampiris.