Sometimes the most frightening films are based on true events. Supernatural monsters and the fecund vaults of the imagination can also provide scares, but there is something particularly chilling when we know that a horrific event actually took place, blurring the divide in the contract between the viewer and the film.

Felipe Cazals’ Canoa: A Shameful Memory (1976) begins in a newsroom where two journalists learn that a handful of young University of Puebla employees have been killed in a nearby town. The scene is succinct and matter-of-fact. We discover that the men had been on a mountaineering trip when an angry mob, convinced that they were actually there to spread Communist rhetoric, slaughtered them in a brutal fashion. It may seem antithetical to reveal the film’s entire narrative in its opening sequence, but Cazals is actually creating a different element of suspense by laying out the entire story ahead. By telling us that his young protagonists are going to die, Cazals has actually added a layer of tension to Canoa that drips from every scene once the men arrive at the remote town.

While it’s not necessary to possess an in-depth knowledge of Mexican history, Canoa debuted at a key time for the country. Set in September 1968, the events on which the film are based occurred just a few weeks before the infamous student massacre in Tlatelolco, Mexico City on October 2. Fed up with the Mexican government’s authoritarian control and following a series of escalating, violent demonstrations where agitators were detained, students took to the streets to protest. Aided by the Communist Party and inspired by the American civil rights movement, the students demanded freedom from an oppressive regime and liberty for its captured compatriots.

Fearful of losing his grip, President Gustavo Díaz Ordaz was also saddled with another major pressure: the Olympics Games were set to open in Mexico City on October 12. With the international eye focused on Mexico, the president decided to silence the protesters, a decision that the country’s own press supported. During the massacre, Mexican soldiers dressed in street clothes open fired on the students, reportedly killing more than 300 people. Government figures, not surprisingly, tallied a much smaller toll. 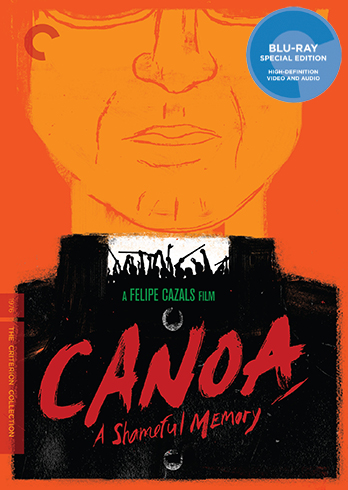 This horrific event overshadowed the massacre that took place just a few weeks earlier in Canoa. Cazals’ film functions as a post-mortem, an attempt to examine the roots of the mass hysteria that led to such a violent outburst. Using such techniques as a fake-documentary format, characters that break the fourth wall and a dizzying array of conflicting information, Canoa’s early tone eventually moves towards the traditional elements of horror moviemaking where Cazals peels back the layers of hypocrisy and paranoia that eventually result in the deaths of the film’s protagonists. Mixed in is a stinging rebuke on social divide and how the educated and rich use their power and knowledge to steer a woefully impoverished rural class.

At the center of the film is Canoa’s priest, a crooked man who controls his congregation by fear-mongering and the dissemination of false news. Cazals is quick to point out that even though Canoa lies just a few kilometers away from Puebla, a large portion of its population is illiterate and uneducated, vulnerable to the sway of a corrupt individual. The priest uses religion to further his agenda, warning his parishioners that Communist students plan to come from Puebla and raise a red and black flag in the town. These heartless atheists are a scourge and threat to God himself.

While Canoa belongs to the past, its message is still relevant in an age where demagoguery and “alternative facts” are accepted. In 1976, less than a decade following the Tlatelolco massacre, the wounds were still fresh. Cazals never directly references the event but there are plenty of clues that civil unrest is leading towards some sort of breaking point. We see protests in the city, hear about worries that the Olympics may be disrupted. Times are tense.

Nothing in Canoa prepares the viewer for the horrific way in which Cazals frames the massacre at its close. We already know that there will be blood and even before the young men set foot in town we know what awful fate awaits them there. Even more chilling is the film’s final moments, a simple scene of the townspeople of Canoa enjoying a feast on their saint’s day, carrying on as normal, as if they had never been transformed into a vicious, bloodthirsty mob.

Mexican filmmakers Guillermo del Toro and Alfonso Cuarón have claimed that Canoa was instrumental in their early growth as directors. Upon its release, the film played in Mexican theaters for more than a year and won a Silver Bear at the Berlin Film Festival, but it then remained unseen in a cinema for nearly 30 years. The Criterion Collection has recently released Canoa on DVD, a wise decision for a film with a horrific message that is still timely and important.