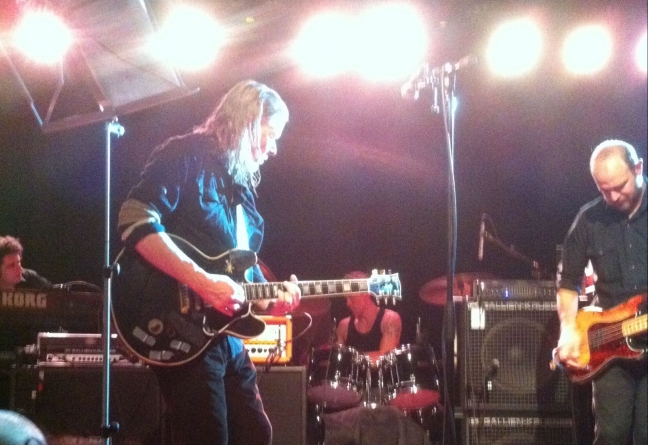 The Swans are dead. Long live the Swans.

There will be no swansong jokes here. At the end of a two and a half hour set in Portland’s Revolution Hall, Michael Gira told the audience he would see us again in some other form. The current iteration of Swans, which returned in 2010 after 14 years of silence, has put out four albums of increasingly abstract music in the past seven years. This current tour, supposedly the last, played like one giant crescendo.

Once you get past the full-on sonic assault you observe each member of the band operating as appendages of one being. Forget the fact that there are more amplifiers than musicians on stage. Forget that Swans is only going to play five “songs” over 150 minutes. Watching the beast swing its thundering body around is what makes a Swans show so intensely magical.

Consider first Christoph Hahn on lap steel. Finger-picks working like elongated nails, one foot resting on the base of his instrument, Hahn chews the hell out of the same piece of gum the entire show. At his most intense, Hahn sneers, looks around at the others, hunching over his giant slide board. Portland must be cursed for Hahn. He spent large portions of this show and the band’s previous local appearance fiddling with amps and wires. He looks sheepish when not playing, sometimes even frustrated.

To his left is Paul Wallfisch, his shock of curly hair rising over his bank of keyboards. He loses himself in play, eyes lolling back and head bobbing in time. Keyboards are sometimes lost in the mix, drowned out by the heavier instruments, but during some of the quieter moments Wallfisch’s delicate melodies shine through.

Then there’s the backbone of the band, drummer Phi Puleo. Wearing a loose, sleeveless shirt, Puleo punishes his set. Veins pulse from his arms and like Wallfisch, Puleo completely loses himself at times, pounding away until it seems like a blood vessel might burst in his brain. Sometimes, when the spirit moves him, Puleo stands up as the rhythm overtakes his entire body.

On bass, Christopher Pravdica looks the least like a rock star, leaving the theatrics to his compatriots. Yet, he pushes his bass to its limits, playing the upper registers close to where the frets come to an end, strumming along as if playing guitar. During some of the more lockstep moments, Pravdica takes the lead melody.

At stage left is stoic Norman Westberg who has been affiliated with the band since the early ‘80s. Tall and thin, Westberg plays it cool, chomping on his gum and standing aside as the other members of Swans fall into the crescendo. Westberg picks his guitar like a deadly weapon and sometimes even strums during the most chaotic moments.

At the center of it all is Gira, stringy hair wet as if he dunked his head in water right before show time. The rest of the band watches as Gira orchestrates, sometimes beating the shit out of his guitar and sometimes chanting into the microphone. Swans has gone beyond songs, their music broken hymnals of swirling lyrics and pounding feedback. Gira may read lyrics from laminated sheets on a music stand, but the words became yet another melody, lost in the chaos.

The Swans are dead. Long live the Swans.