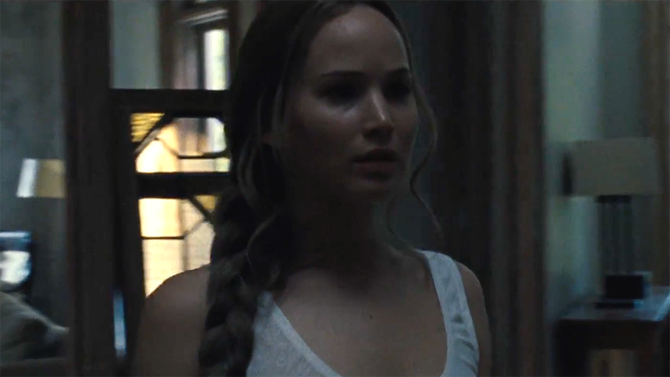 Can a film that brutalizes women be feminist?

Can a film that brutalizes women be feminist? Is a film by a self-obsessed male genius about a self-obsessed male genius a confession, or is it masturbation? Does a film that makes it impossible to suspend disbelief make anyone believe anything? These are the kinds of big questions that writer-director Darren Aronofsky’s new horror epic Mother! demands of its audience. It’s at once a supernaturally literal account of toxic masculinity and a markedly figurative representation of mankind’s destruction of the environment. In parts, it is also a tragic love story, a haunted house tale, a ghost story, a social satire and a domestic drama. Aronofsky bites off more than any filmmaker could possibly hope to chew, but that only adds to the insane satisfaction of the Mother! experience.

Because both films follow a woman’s descent into potentially supernatural madness, Aronofsky’s latest will inevitably be compared to his dark ballet saga, Black Swan (2010). However, Mother! has much more in common with his earlier works Pi, Requiem for a Dream and even The Fountain than it does his more recent output. And though its director enjoys a deep character study, as seen in Black Swan and in The Wrestler (2008), Mother! is less concerned with the inner workings of its titular character than either of those films, even though Jennifer Lawrence’s maternal character appears in nearly every scene. Instead, the film is concerned with what happens to its protagonist and why. What does the mother’s horrific treatment by Him (Javier Bardem) and every other character in the film mean?

Aronofsky is obsessed with the visual and allegorical, and Mother! is accordingly sumptuous and symbolic, representing the director at his most self-indulgent but also at his most free. Perhaps this is why the film ties closely to his earliest work, when his lack of resources was offset with audacious ambition. Here he has both, and the result is bombastic, metaphoric, grandiose and gross.

The film begins with the close-up of a heavily burnt woman before quickly cutting to Bardem’s Him placing a crystal into a sort of wired pedestal, which turns his burnt, apocalyptic surroundings into a Pottery Barn-appointed Narnia. Walls and broken rafters magically rise and repair themselves, sporting fresh coats of earth-tone paint and the duvet set buds and blossoms, revealing a beautiful sleeping beauty (Lawrence), who awakens to start her day. Her very first act is to reach to her husband’s side of the bed to check to see if he’s with her, which of course he is not. Because of this mystical beginning, Mother! never allows us to think that what we’re watching is anything but fantasy. At first, this is deflating, as it is hard to conjure any real feelings of attachment to Lawrence’s unnamed character when she appears to be a part of some dream world. However, this immediately puts the viewer on watch for Aronofsky’s puzzles and symbols.

Soon, a man and a woman (Ed Harris and Michelle Pfeiffer) appear uninvited and Bardem’s character, without consulting his wife, asks them to stay. Initially, this is only a minor irritation, but as the guests grow stranger and more demanding, their presence in the house becomes a stressor for both the mother and the audience. Pfeiffer is particularly effective in these scenes, playing the kind of vamp that women are so often asked to play with a self-aware fatigue and defensive abrasiveness that contrasts beautifully with the mother’s selfless devotion to her husband and shy wholesomeness in general.

A tragedy leads to a nighttime wake that turns the mother’s stress over unwanted company into something deeper, a profound feeling of intrusion that the viewer will share. In a more subtle film, this could have been the climax, as it is frustrating and strange but also moves the plot towards its biggest turn. But Mother! isn’t subtle, and any feelings that the wake conjure will increase exponentially as things grow more and more out of hand. The final 30 minutes contain some of the most out-there, vulgar and offensive imagery included in a mainstream release, but this wild disregard for convention is a credit to Aronofsky’s self-referential vision, as it represents how much a male artist can get away with.

Mother! wouldn’t work nearly as well without Lawrence, whose performance feels every bit as self-aware as Aronosky’s filmmaking. As one of the world’s most famous actors, Lawrence is asked not only to be good at her craft but to also be well-liked, beautiful and sincere. Her role here as a woman desperate to please her husband demonstrates the unnatural expectations society has for women. As a viewer, you may find yourself angry that Lawrence’s character doesn’t rise up, Katniss-like, and take on each of the film’s villains, and that is the point. Because the role only asks for mere glimpses of that inner fire from Lawrence’s volatile earlier characters, her shy and afflicted role here is particularly noteworthy. She most often uses her eyes rather than words to react to Bardem’s mercurial husband figure, and her eyes drive the emotional undertow of the film.

Though its originality is part of its appeal, the film also finds Aronofsky wearing his influences on his sleeve. The over-the-top violence, supernatural elements and recurrence of the color yellow suggests reverence for Italian giallo (which literally translates to “yellow) legends Dario Argento and Mario Brava. Recurring images of a burning otherworld suggest inspiration from Jacob’s Ladder or perhaps the Silent Hill video game series (surely not the films). And the dark magic, toads, rotting wood and false religious symbols suggest a heavy link to Southern Gothic literature.

Mother! doesn’t answer all the questions it raises. But its readiness to inspire and challenge audiences is what sets it apart. With so many films following safe and familiar arcs, an original work that starts deliberately and ends operatically is heaven-sent. Unlike the imaginative but tepid Noah, Mother! uses Aronofsky’s penchant for violent imagery with incredible efficacy, its brutality forcing viewers to ask questions about a society that will both celebrate and condemn it.