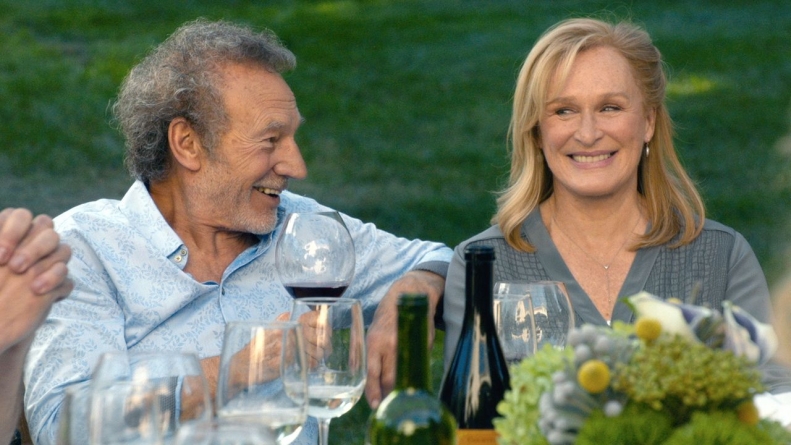 While The Wilde Wedding it appears to be a romantic comedy, it features little romance and even less comedy.

While The Wilde Wedding appears to be a romantic comedy, it features little romance and even less comedy. The talented cast is left adrift by the script and the direction, and each member appears to be bored, forgotten or unsure as to how they found themselves in such a lightweight feature. The action revolves around the fourth wedding of film star Eve Wilde (Glenn Close). Her latest groom, a writer named Harold (Patrick Stewart), clearly isn’t husband material, and the guest list includes her first husband, stage actor Laurence Darling (John Malkovich). They and the rest of the attendees are gathered at Eve’s mansion, where a series of tepid subplots distract from the flimsy main narrative, creating a kind of domestic, non-musical version of Mamma Mia!.

There is definitely space in the cinematic universe for light romantic comedies, particularly those featuring such fantastic stars. The diversification of film release models allows for films like The Wilde Wedding to be made and released, and this is the exact kind of movie that could flourish on video-on-demand and in limited release. However, The Wilde Wedding’s lack of laughs, charm and, most significantly, energy will prevent that from happening.

Close, one of the best actresses of any generation, has been having a renaissance as of late, balancing delightfully campy performances in science fiction films (Guardians of the Galaxy, What Happened to Monday) with lead roles in smaller prestige films like this fall’s The Wife. The Wilde Wedding, however, gives her no chances to use the preternaturally expressive facial expressions that make her such a natural at camp, comedy, drama and tragedy. Instead, she looks mostly distracted and annoyed in this film.

Still, she fares better than Malkovich and Stewart, who come perilously close to embarrassing themselves in their respective roles. Malkovich’s snippy ex-husband is a less subtle Niles Crane-type, while Stewart, hidden under a sheepdog wig, plays the same kind of icky, older creep that Robert De Niro did in Bad Grandpa. The supporting cast is slightly better, particularly the all-in Minnie Driver as the ex-wife of one of Eve’s children and the charming, Shailene Woodley-like Grace Van Patten as Mackenzie, Eve’s aspiring-documentarian granddaughter.

It appears as if writer-director Damian Harris is aiming for a sort of Robert Altman-esque ensemble dramedy, however none of the parts are written strongly enough for the viewer to care about any of the main characters, let alone the minor ones. And unlike Altman and other great ensemble filmmakers, Harris refuses to subvert or surprise in The Wilde Wedding. Though there are affairs and some drugs, none of the characters have inner-lives that invite exploration or contemplation. Instead they are simultaneously in-your-face and unsubstantial.

The film has the glossy sheen of an Amazon sitcom, courtesy of cinematographer Paula Huidobro, but what really stands out are the costumes, which are eclectic, classy and occasionally eye-popping. Costume designer Stacey Berman seems to at least be having fun, which cannot be said for the actors. The Wilde Wedding was filmed on-location in Ardsley-on-Hudson in upstate New York and it, like the costumes, is beautiful and a tad ostentatious.

It is exciting any time an actress of Glenn Close’s stature gets to lead a film, given how ageist and sexist Hollywood can be. But the effort needs to go beyond casting. Close’s talents, and the talents of her esteemed co-stars, are deserving of a better film than The Wilde Wedding.