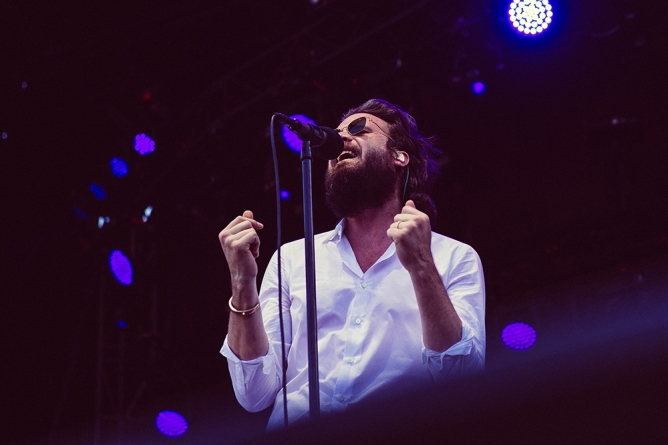 2017 is the year of Josh Tillman, a.k.a. Father John Misty, with the release of Pure Comedy in April, a relentless worldwide tour schedule and one baffling media appearance after another. Produced by Laurel Canyon whiz Jonathan Wilson, the nearly 75-minute album was supposed to be Misty’s attempt to swing for the fences, and for the most part, it was. Yet his music is perhaps best appreciated not through one’s headphones but live on stage.

Not including the leader, there were nine musicians, with a drummer, a bassist, a keyboard player, a pianist, two guitar players and finally three wind players who handled horns and the occasional flute. In the center of all this stood the shamanic Tillman, sometimes strumming an acoustic, other times slinking around with the mic in reptilian fashion, punctuating lines with ballet-like steps and expressive hand gestures.

His set started with the first four tracks from Pure Comedy, which he would tap several more times during the night as well as offering a generous nine tracks from 2015’s I Love You, Honeybear and deep cuts from 2012’s Fear Fun, including one of the highlights of the set, “Only Son of the Ladiesman.”

The man does not skimp on his back catalog, and the songs were flawlessly performed. Tillman has an eerily on-pitch voice, mostly crystal-clear diction à la Jackson Browne with the occasional growl or scream, which he brought out on show-stopping takes of “Nothing Good Ever Happens at the Goddamn Thirsty Crow” (a personal favorite) and the rabid closer, “The Ideal Husband.” Throughout, he exhibits a rare Morrison-meets-Minnelli charisma and is not too shy to ham it up, Vegas-style.

Indeed, there is seemingly nothing about the show that isn’t choreographed, even the self-deprecating jokes. Glancing at past setlists, it would seem that he plays pretty much the same show each night, which allows the listener to experience a narrative arc to the songs that would otherwise not be there. It also makes possible the striking visual backdrop to the show, which ranges from somewhat grotesque, Babadook-style animation to more evocative planetary images and ambient mood lighting.

If Tillman’s perfect singing can seem a bit emotionally distant, the reward is that this allows audiences to pay greater attention to the words, which are often a sublime tapestry of desire, fantasy, doubt, self-deception and fraught attempts at naked honesty. Tillman has positioned himself as the ironic mirror of our contemporary societal follies, playing a character who both perpetrates and falls victim to those follies; vain and self-loathing, an inveterate Lothario and somehow also a frail, vulnerable soul, such is Tillman the artist.

Whatever you think of his music, go see him live—it’s a real treat. And if the stuff he sings cuts a bit close to home, remember, he’s just the messenger…a fabulously self-aware one at that.