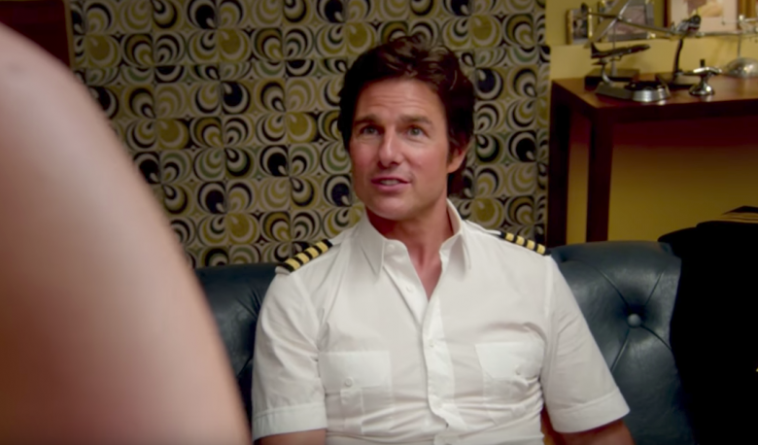 Cruise has always been a monolith of quintessential Americana, but with the aging cracks in his well-worn facade, he’s been doing even more fascinating work.

From the moment the spinning globe of the Universal logo skips mid-frame, transforming from the grandeur of its current CGI incarnation to the flat, throwback iteration from the ’70s, it’s clear American Made is going to be movie more concerned with charming bombast than historical accuracy. Doug Liman has directed a film that flaunts its “based on a true story” origins with a comical font chyron and plenty of winks and nudges that, no matter how fun the proceedings may be, signal it is more fiction than fact.

But that’s part of why it’s so entertaining. The truth behind American Made‘s screwball yarn is largely depressing. One need only read half a summary on their smartphone walking out during the closing credits to see how thoroughly the script diverts from reality. The real Barry Seal, the drug smuggling, gun running former TWA pilot Tom Cruise stars as, wasn’t a fraction the iconic hustler the film’s grinning marketing suggests. Instead, Liman and company have made a movie that captures how Seal saw himself and, in doing so, have made a more perfectly American piece of cinema than realism may have helped them create.

Cruise’s Seal is a lovable hotshot a couple decades past his prime. Imagine Top Gun‘s Maverick having his need for speed stifled by FAA regulations and mundane commercial airline salaries. Seal gets a taste for bending the rulebooks by sneaking cases of Cuban cigars into the country, which puts him on the map of a CIA spook named Schafer (Domhnall Gleeson). Schaefer recruits Seal with his own plane and pays him with tax dollars to spy on various Central American locales in the pursuit of stamping out communism. But while the life or death anxiety of dodging enemy gunfire in the air awaken the napping thrillseeker in Seal, this new extrareal vocation isn’t enough for him to adequately feed his family. Luckily for him, he ends up working for Pablo Escobar, flying kilos of cocaine into the swamps of Louisiana.

From there, the film’s first half is a lensman arms race of absurd plot twists and exponentially difficult to believe turns of events. Seal finds himself the focal point between the CIA, the cartels and the Contras, shuffling guns, drugs, money and intel between a network of geopolitical friends and foes. The increasingly complex endeavor brings him so much cash in the small, nothing town of Mena that he practically owns the town, funding several banks, credit unions and other money laundering fronts. The globe-trotting action adventure quickly devolves into the second half of every excess laden gangster picture. The too good to be true enterprise comes tumbling down – an American dream devolved into a tragic nightmare.

The script isn’t the sharpest; it’s not the most original motion picture. Liman synthesizes Adam McKay’s The Big Short PowerPoint polemicism with the Scorsese phantasmagoria of Wolf of Wall Street and Goodfellas, but this style is severely lacking. Liman hits the broad strokes of what we’ve come to expect from this kind of screen story, but he doesn’t possess the recognizable idiosyncrasy someone like late period David O. Russell oozes when it’s time to make a pastiche his own. Russell at least would have found more for Seal’s wife Lucy (Sarah Wright) to do. As it stands, the movie is largely a vehicle for Tom Cruise’s considerable screen presence.

And thank God for that! Throughout his career, Cruise has been a monolith of quintessential Americana, but with the aging cracks in his well-worn facade, he’s been doing even more fascinating work. His last outing with Liman, Edge of Tomorrow, allowed him to poke some fun at his usual action hero persona, and his interpretation of Barry Seal pushes that even further. In Seal, Cruise has found the perfect conduit for his veteran charm, blasting megawatt likability that defies logic and reason. With a different lead, American Made would be a middling movie that says little about a time when the government was complicit in short sighted colonialist schemes. With Cruise, however, it becomes an infectious fairy tale about the American dream, one whose exaggerated fabrications show how toxic capitalism’s saccharine promises can truly be