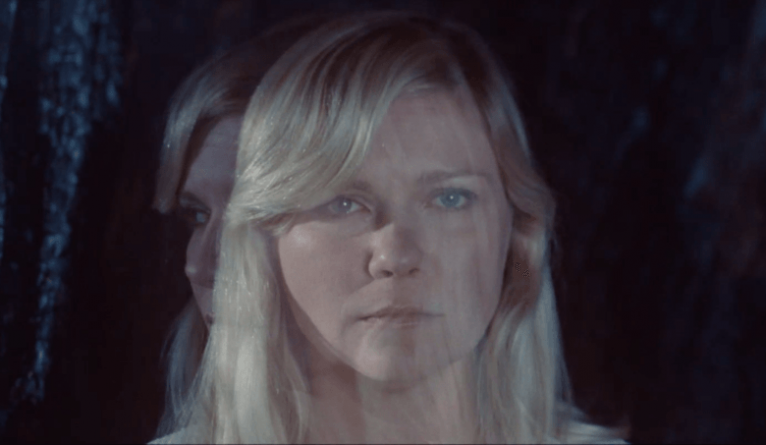 Woodshock is as tedious as its punny title is nonsensical.

Following the death of her mother, whom she assisted in suicide, Theresa (Kirsten Dunst) wanders around in a daze and touches stuff. She trails her fingers along the hallway wall, lies in bed and traces the floral curtains, curls into a ball and touches grooves in the hardwood floor. In response to whatever gnaws at her—apparently some mix of grief, guilt and drug-induced hallucinations—she wanders the woods and runs her hands along tree bark. When she pricks her finger on a kitchen knife, she draws a line of blood onto the white tablecloth.

Woodshock, the directorial debut of fashion designer sisters Kate and Laura Mulleavy, clings to the idea that still waters inherently run deep. We don’t have much to go on with Theresa. We meet her when those curious fingers of hers are rolling a joint full of poison-laced marijuana to help her dying mother (Susan Traylor) end the pain, and we’re offered no insights into what she was like before the death, other than that she works at a medical marijuana dispensary. Upon her return from bereavement, her boss, Keith (Pilou Asbæk)—complicit in her DIY death-with-dignity scheme and perhaps a former lover—tells a concerned patron, “She’s just being Theresa.” It’s impossible to know whether he’s glossing over the truth or whether she’s always so mopey, because the Mulleavy sisters refuse to let their film delve more than skin deep.

Theresa’s husband, Nick (Joe Cole), works as a logger and barely addresses the fact that his mother-in-law has died, despite that the married couple continue to live in the dead woman’s forest-enshrouded house. He reacts to Theresa’s increasingly odd behavior with a sour mixture of confusion, annoyance and scorn, and the deepest insight we’re given into his psyche is that he seems to enjoy crushing moths in midair. As a result of Nick’s frequent emotional and physical absence, Theresa ends up spending more time with Keith, both at work and, reluctantly, in social settings. He eventually convinces her to assist him as an angel of death once again, coaxing her to prepare another poisoned joint for a loyal elderly customer—though it’s unclear why he doesn’t just do this himself. When things don’t go as planned, Theresa’s mental state takes a turn for the worse, and she starts smoking the toxic joints herself—which inexplicably cause pleasant fractal hallucinations rather than kill her.

Woodshock is as tedious as its punny title is nonsensical. The pacing is so overlong that this 100-minute feature could’ve likely been condensed into a far more effective 30-minute short. The Mulleavy sisters offer some visually-pleasing cinematography, but they treat shots of dewdrops on flower petals or sunlight refracting through a windowpane as profound by default. Dunst thrived in her depressive role in Lars von Trier’s Melancholia, but she’s not given anywhere near as much to work with here. She just sits and stares and touches things, and we’re expected to be moved by this simply because she’s there on the screen in front of us, looking vaguely sad.