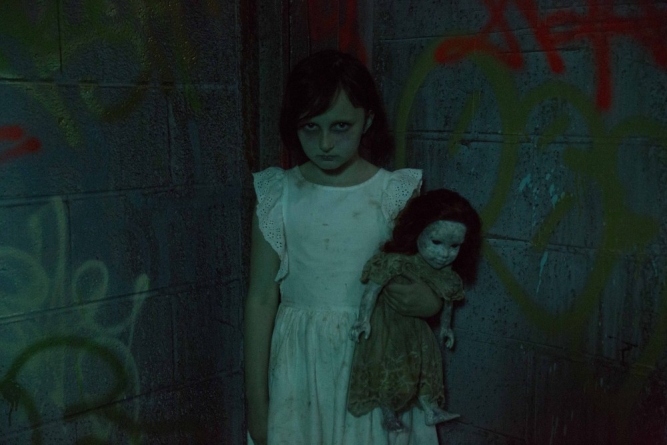 A paranormal thriller of many strengths and a glaring weakness.

The Sound, by writer/director Jenna Mattison, is a paranormal thriller of many strengths and a glaring weakness. Starring Rose McGowan as Kelly Johansen, an obsessive investigator and debunker of things that go bump in the night, the hook is the method to Kelly’s ghost busting. She studies the tactile sound waves at the sites of paranormal contact, hypothesizing these low frequency sounds affect people imperceptibly and cause hallucinations. The visions are commonly misreported as ghosts, spirits and other spectral phenomena.

Using Twitter and her blog to create buzz around her work, Kelly receives cries for help from those being haunted. She arrives on the scene with her laptop, instruments and headphones and waits with her clients for a visitation. When the “ghosts” arrive there is usually a spike in tactile sound that can be easily explained. After all, there are no such things as ghosts, and Kelly will take to Twitter to let her fans know she has #srslydebunked another sighting. Just when she’s about to take a pause and spend some time with her fiancé, Ethan (Richard Gunn), a new case arrives in her inbox that’s too good to pass up. There is a haunted subway station in Toronto that has been closed due to sightings of a mysterious “lady in red.”

Kelly goes to the so-called ghost station and descends its dark tunnels. The tunnels are the movie’s great strength, offering a graffiti-strewn haunted house that Mattison and her cinematographer, Pasha Patriki, use to chilling effect. Lit mostly by sporadic, florescent bulbs and cell phone flashlights, the director creates an atmosphere of dread with her handheld camera and steadycam shots. The camera always seems to be floating like a wraith, waiting to reveal itself to our erstwhile debunker. The omnipresent graffiti is always at the edges of the light, and, as good consumers of the genre, one’s eye is always watching for the paintings to come to life and pounce.

That we care enough about Kelly to spend 90 minutes with her is a credit to McGowan. She is a fierce presence onscreen and always demands her audience’s attention, vital qualities for The Sound because the writing is rather thin. McGowan manages her way through a great many information dumps pertaining to tactile sound with a practiced sardonicism that makes it seem like Kelly’s explained her work ad nauseam. Madness can be a tricky state to perform, becoming showy in the hands of less talented actors, but McGowan makes you ache for Kelly as the character’s perception of reality starts to crumble. Christopher Lloyd has a small role as Clinton Jones, a subterranean maintenance worker, and his presence makes you hope he will achieve the sort of career renaissance that Michael Keaton currently enjoys. Michael Eklund as Detective Richards is the other standout in the small cast.

Those are the strengths. The weakness is the writing. To discuss some of the structural tics would spoil the movie, but the dialogue tends toward the expository and the deus ex machina is maddening because it’s actual machines. Yes, we live in a time of convenience where all the information we’ll ever need is at our fingertips, but a Google search is not good drama. The main character uses Google so often that her expertise can be likened to that of the DJ that spins nothing, but shows up at the gig with his iPhone and a playlist. There has to be a better way for a protagonist to receive information than the quotidian laziness we all exhibit. It’s too easy. There have to be greater obstacles than one’s LTE signal dropping down to 3G or there’s no reason to watch. As a first time director, Mattison helms a spectacular looking piece of genre filmmaking. All the technical aspects and above the line talent make the movie play bigger than its budget. All it needed to really stand out was a rewrite.