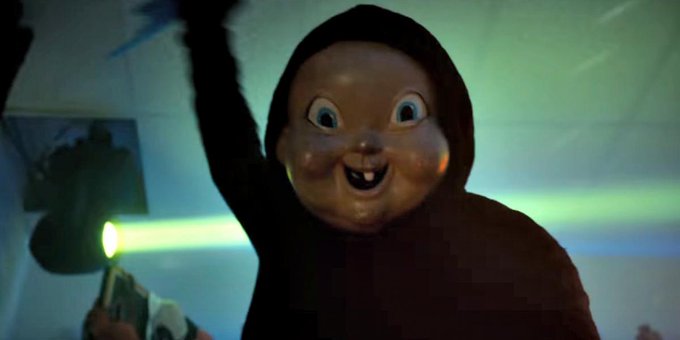 A certified Tuesday night time-waster whenever it finally makes it to Netflix.

Groundhog Day may have perfected the time-loop movie paradigm, so much so that it’s synonymous with any film that plays in that particular structural sandbox. But Edge of Tomorrow proved that the tropes tied to this style still work great when blended with another genre. In the case of that recent Tom Cruise vehicle, it was sci-fi action, but for Happy Death Day, it’s a slasher whodunit. While it squanders some of its potential for valuable social commentary, it takes a useful framework we’ve all come to expect and creates a fun, lean horror flick.

Happy Death Day follows Tree Gelbman (Jessica Rothe), a sorority girl doomed to relive her birthday over and over until she can prevent her own death at the hands of a masked killer. The screenplay, from controversial comic book scribe Scott Lobdell, is efficiently crafted. The characters and premise are set up with little fuss and not much time is wasted before Tree accepts the quandary she’s trapped in. The key to constructing a functional time loop movie is to build in enough recognizable details within the set timeframe so that each recursion can unravel with an endless amount of permutations. Death Day has the built-in mystery of who Tree’s killer is, so these loop details are all clues and red herrings.

Tree’s day begins with an irritating ringtone waking her up in the dorm of a stranger she presumably slept with. (The song is not, it must be said, 50 Cent’s “In Da Club” as it was in the trailer.) From there, a walk of shame peppered with memorable bits for repetition introduces the audience to her best frenemy, Danielle (Rachel Matthews), her long-suffering roommate, Lori (Ruby Modine), and a married professor she’s having an affair with named Gregory (Charles Aitken). Once we see Tree’s initial death at the hands of someone wearing a goofy but frightening baby-faced mask, this same cycle renews, with the ringtone serving the same role as “I Got You Babe” in Groundhog Day. It’s an airtight structure from which a more ambitious movie could’ve sprung forth.

From the outset, this feels like the kind of slasher flick that might elevate the pulpier elements of the material with the metatextual exploration of the genre’s sometimes troubling sexual politics. Something that makes the early few passes of the day fascinating is how every male, regardless of stature, feels like a plausible suspect for the killer. Even Carter (Israel Broussard), the “nice guy” romantic lead, has a moment when Tree is rude to him and his friendly exterior deteriorates into a flash of menace that gives pause. If someone was going to up and stab a woman to death, there’s a good chance the perpetrator is some dude in her life and the motive is some perceived slight at his masculinity.

But the film doesn’t really grab onto that tether and pull. Instead, it chooses to highlight Tree’s more unlikable character flaws, making her into someone that the audience can feel might deserve her bloody fate. Time-loop movies are great for difficult, prickly protagonists, because reliving the same day and the same exact circumstances breeds character growth in a way traditional narratives do not. Rothe plays Tree with a special kind of vulnerability, where she sheds another layer of giving a fuck every time she’s killed.

This leads to a really brash section of the film where she treats each new day like an expendable life in a video game and becomes a rawer, less-concerned version of herself. It’s almost liberating in a way, but it’s an uncomfortable angle to take, given the implications. Lest it seem the “rape culture” observations are too superfluous, an early death scene features a drunk frat guy walk in on the killer about to end Tree’s life while she screams for help and the guy laughs it off and shuts the door behind him. It’s played like a gag, but if it’s meant to be, it’s a pretty gross one.

The film’s final third goes in a different direction than other time-loop movies, introducing the idea that Tree only has a finite number of tries, as she weakens more and more with every death. This development increases the need to resolve the mystery, which it initially reveals in such a way to deflate how well the whodunit has otherwise been set up. Tree finds out who kills her and takes one last pass at the day and gets everything nearly perfect, from apologizing to people she’s hurt to righting myriad wrongs displayed throughout the film. It’s a departure that gives Happy Death Day something resembling a heartfelt interlude, but it’s still set up for one final swerve.

There’s some irritating gags and one-liners throughout and some of the way the other sorority girls are written is insulting, but for the most part, Happy Death Day is a smart thriller with a leading actress exhibiting some great scream-queen chops. One can’t help but feel a more progressive writer would have mined the material for more thematically satisfying drama, but the purely exploitation-level glee is hard to argue with, especially since it doesn’t overstay its welcome and is paced like a Swiss watch. In the pantheon of recent 90-minute thrillers starring thin white girls trying not to die, Happy Death Day will join The Shallows as a certified Tuesday night time-waster whenever it finally makes it to Netflix.