Great movies can immerse us in another human being’s life, often taking us on a thrilling tour of a particularly eventful existence. The genius of Jeanne Dielman, 23, Quai Du Commerce, 1080 Bruxelles, is that director Chantal Akerman, only 25 at the time, quietly observes what are for the most part mundane moments in the ordinary life of a single mother, capturing our attention with nearly three and a half hours of almost nothing happening.

The film documents the domestic routines of Jeanne (Delphine Seyrig), a single mother who lives with her teenage son in a well-furnished middle-class apartment, solid art-nouveau furniture and period details implying a financial comfort that has perhaps fallen away since her husband died. We watch Jeanne at length as she prepares dinner for her son, conscientiously turning lights off when she leaves a room, her footsteps echoing on parquet and tile floors providing the soundtrack for a highly ordered daily regimen. Jeanne is a good mother; when she serves dinner she gives her son the lion’s share of potatoes and meat, and she helps him with his school lessons.

Cinematographer Babbette Mangolte frames much of the film in medium shots that show us Seyrig’s entire body moving through the frame, the actress’s classical features (a perfect muse for such cinematic experiments as Last Year at Marienbad) evoking a statue come to life to move among the worldly concerns of mortals. Yet when Jeanne answers the door to receive her first client, her figure is cropped at the torso; headless, legless, as if caught in an anonymous pose for an artist. Jeanne leads her trick down a hallway into a room to which we are not privy; we don’t (yet) see what happens, but we know exactly what happens. 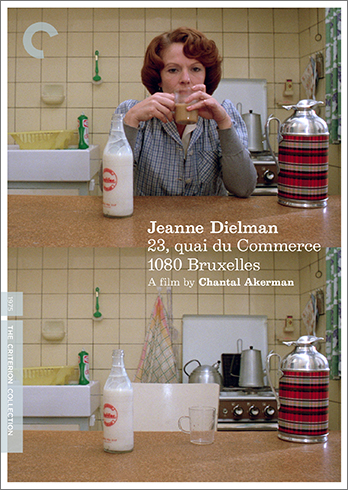 Akerman treats Jeanne’s trade matter-of-factly; after each client, we watch Jeanne put her fee in an elegant tureen on the dining room table as if this act were the continuation of a centuries-old behavior once captured on Greek urns.

Reduced to summary, the film sounds like melodrama, but the long takes measure out a drab existence; with her back to the screen, we watch Jeanne wash dishes; trying to determine why her coffee tastes bad, we see her test the milk and then proceed to make a fresh pot. All of this is in real time.

The static compositions, which sometimes suggest a human zoo exhibit, are simple and ingenious: You can see her son leaving a room and turning off the lights, just as he learned from his mother, and as they move from room to room the lights establish their routine and their relationship, as well as spatial relationships.

It also establishes Jeanne’s sense of order. Wall tiles in her kitchen form a grid that accents the room’s design, coordinates on an axis in which everything must fit exactly the same way. The décor is mirrored in her wardrobe, her checkered smock echoing the tile, her green nightgown and coat in harmony with the celeste green walls. She is shaped by her environment and her job is to support that structure through her daily routine.

This may sound the epitome of arthouse tedium, but it’s mesmerizing, everything on the screen helping us follow her routine with a domestic rigor that replaces dramatic structure. When she is thrown off her pattern, when her well-brushed hair becomes disheveled after a trick and she fails to replace the lid on the tureen—these small gestures, departures from that rigor, gain huge significance.

Perhaps even more than her climactic act, the film’s major source of tension is an overcooked pot of potatoes. It’s an equation that does not compute; she carries the pot from room to room uncertain what to do with them as any deviation from her carefully constructed schedule is disastrous.

Akerman, a Belgian-born filmmaker, spent time in New York in the early ‘70s, where she encountered the glacially-paced marathon films of Andy Warhol and the experimental works of Jonas Mekas and Michael Snow. She tapped those influences for a dramatic experiment that is like nothing else in her filmography, nor anyone else’s. In a wonderful echo of Jeanne’s experience, the overcooked potatoes lead her to the corner grocery store, run by a woman who walks a similarly-tiled floor, her footsteps marking out her own routine, ending in a seat in the back room perfectly framed by the doorway. Its length and minimalistic approach make Jeanne Dielmanone of the more challenging cinematic landmarks, but it’s a hypnotic, fascinating simulacrum of a woman’s life.