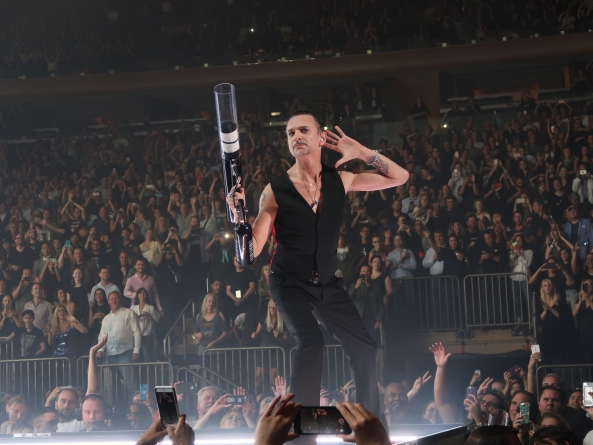 Dave Gahan lifted the concert into the realm of the amazing.

Concerts rarely feel like events these days, situations where all your friends are excited and talking about an upcoming show. It wasn’t always that way. When I was young, we counted down the days before Pink Floyd came to town, and each U2 tour seemed to hold certain hi-tech surprises we couldn’t wait to experience. Sure, people are enthusiastic about a Kendrick Lamar show, but it feels somewhat different.

When Depeche Mode announced their Global Spirit Tour months ago, my Facebook page lit up with status updates on purchasing tickets and arguing about whether the pre-sale was actually a Ponzi scheme or not. When the band finally rolled into town months later, it felt like half the people I knew in Portland would be at the Moda Center, ready to dance along to “Enjoy the Silence” and “Personal Jesus.”

Although Martin Gore writes the bulk of Depeche Mode’s material, the enthusiasm of frontman Dave Gahan lifted the concert into the realm of the amazing. During a 135-minute set and 22 songs, Gahan danced, spun, wriggled, bellowed at the crowd and grabbed his crotch with the eagerness of a man half his 55 years. Topless beneath a sleeveless vest, Gahan was very much the pop star, every motion big and calculated. One of my friends commented that he wishes he could still move that way when he’s 55. Let’s not forget, this is a man who had a heart attack on stage in New Orleans in 1993 forcing his bandmates to play the encore without him, tried to commit suicide two years later, overdosed on a speedball a year after that and then survived a bladder tumor. 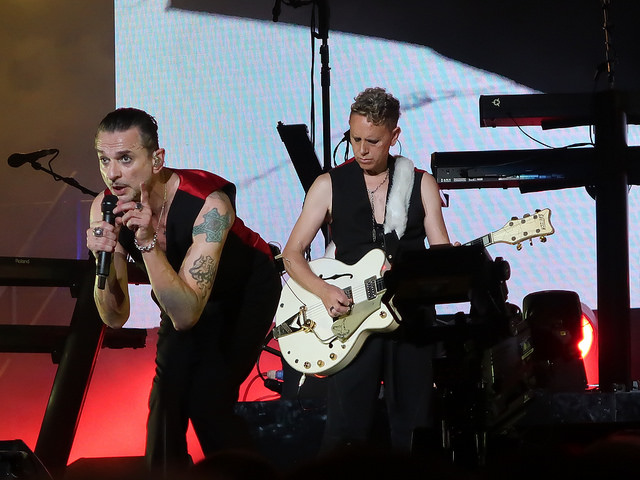 It appeared the past demons no longer encircled Gahan as he, along with founding members Gore and Andy Fletcher, seemed to relish playing to us. People of all walks populated the Moda Center from Goths to hippies to besuited businessmen who impressed their dates with premium tickets that cost more than a week of groceries for a family of four. Kicking off the show with “Going Backwards,” the leading track on the band’s new album, Spirit, the people around me on the floor leapt to their feet and remained standing and dancing for the duration of the show.

Although Depeche Mode has been around since 1981, the setlist didn’t venture too much further back than 1986, save a rousing version of “Everything Counts.” Depeche Mode is not a greatest hits act, and although the set leaned a little heavy on material from Spirit, the band seemed to truly enjoy playing the new material. Yeah, I would have loved to hear “Blasphemous Rumors” or “New Dress,” but maybe then the band would be just going through the motions. Not once did this show feel perfunctory.

That doesn’t mean Depeche Mode withheld their most beloved songs from their fans. After a stirring version of “In Your Room,” the opening synth line of “World in My Eyes” made the crowd scream in delight. Meanwhile, Gore gave Gahan a few songs respite when he took over vocals for an absolutely beautiful version of “A Question of Lust” and “Home,” giving the genius behind Depeche Mode’s best songs a moment to shine. Gahan even let the fans have their moment, leading sing-along versions of “Everything Counts” and “Enjoy the Silence,” chilling moments where thousands of fans filled the arena with song.

After finishing the first set with “Never Let Me Down Again,” the band left the stage for a rest. Lights from cell phones filled the room. Then, Gore returned for a tender version of “Somebody.” Although the song lacked the muscular swagger of much of the set, it served as nice palate cleanser for the four songs that followed. “Walking in My Shoes” was appropriately epic, while a subdued cover of “Heroes” allowed Gahan to pay tribute to one of his idols. Following “I Feel You” and “Personal Jesus,” the crowd cheered and howled for more. The stage lights remained off and anticipation for a second encore filled the arena. Then the lights came on. Yet, the excitement of this event lingered as my cellphone lit up with messages of rabid appreciation from all my friends lucky enough to witness such a great concert.