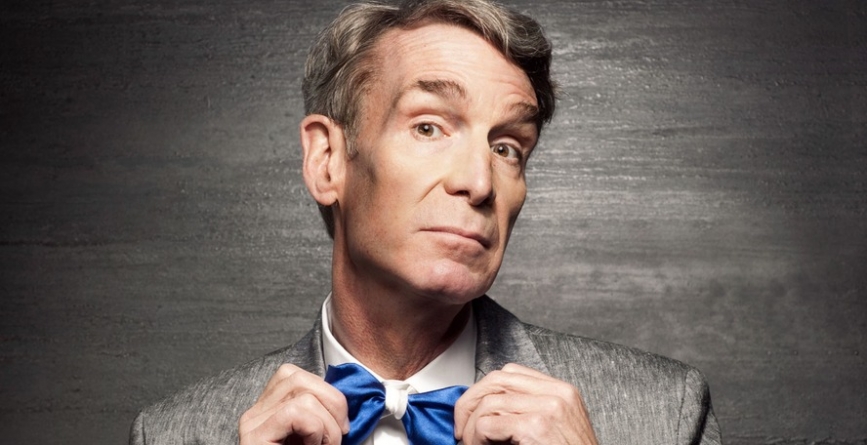 Science rules and so does the science guy.

Watching the new documentary Bill Nye: Science Guy, directed by Jason Sussberg and David Alvarado, conjured thoughts of the original “Star Trek” series, but not due to obvious correlations between science and science fiction. After “Star Trek” went off the air, Leonard Nimoy and William Shatner came to resent Spock and Kirk while a passionate and growing fandom made those characters iconic. Nimoy even penned a tome called I am not Spock. In the decades since introducing a generation of children to scientific concepts with the frenzied humor of a Looney Tunes character, Bill Nye is trying to define himself in opposition to his persona The Science Guy. Bill Nye: Science Guy is the portrait of a man enduring the choices he’s made over his lifetime while not being at peace with those decisions.

For the uninitiated, Bill Nye is Carl Sagan to the children of the ‘90s. On Saturday mornings, this pencil-thin jester dressed in a lab coat democratized scientific education through his passion and the basic format of a comedy/variety show. The goal was to inspire children with the message that anyone could take up the mantel and become a scientist. Based on the testimonials that open the documentary from members of an audience waiting to see Nye onstage, he succeeded. But for all the enthusiasm Nye engenders among his audience, he seems painfully uncomfortable around them. Cantankerous, impatient and suffering from what he dubs “selfie-fatigue,” he doesn’t slow for pictures and autographs. The adoration seems to remind him of his struggle to be taken seriously as a scientific expert rather than a performer on a children’s show who holds no PhD: a charge often levied at him by the climate change deniers and anti-science trolls he debates.

This documentary is part of the reemergence of Bill Nye into public life. Education made him a celebrity and he has decided to use that power this time around to talk to adults about the dangers of climate change. Rising CO2 levels and the persistence with which the anti-science coterie gets taken seriously has added urgency to his mission. His lack of patience may be due to the fact that we are running out of time to stabilize the damage to the atmosphere caused by man-made emissions, but a real anger has replaced his frivolity. For all the children he reached, too many missed his message. The burden of the mass ignorance that embroils America has quite literally bowed Nye’s back. If this were a cop movie he would be the grizzled veteran returning to the badge who can’t believe he has to do this shit again.

Few subjects in documentaries volunteer to look bad, but Nye has opted to participate in an honest assessment of his life. His partners on Bill Nye: The Science Guy, James McKenna and Erren Gottlieb, describe a lack of trust and betrayals during the making of the show. What looked like pure joy and wonder onscreen was an apparent strain to create and the glimpses all three give of the strife behind the scenes is disheartening. In fact, Nye only seems comfortable among other scientists or home with his siblings. He has no spouse or children, a regret he mentions several times on camera. His legacy is the generation of children he influenced, a more than satisfactory achievement for an educator, but insufficient in Nye’s introspective moments.

Bill Nye: Science Guy is also a surprising treatise about celebrity. Fame intoxicates everyone who experiences it, even someone as brilliant as Nye. In fact, it might have proven even more alluring for a self-professed “Science Guy” with a penchant for bowties. After the show ended in 1998, Nye was exhausted and looking for a new challenge, but his celebrity made him a favorite of basic cable infotainment hubs like Fox News and CNN. He debated climate deniers and creationists, legitimizing their claims, according to his critics. In one of the most revealing scenes in the film, neuroscientist Heather Berlin interviews Nye and offers her thesis that fame changes the brain on a cellular level. Nye doesn’t try to deny her claim, saying instead that it’s a certainty.

For all the juxtaposition between the man and the persona he invented, Bill Nye continues to do amazing things. His choice to engage in high profile debates with the likes of Creation Museum founder Ken Ham feels like a waste of his energy, but Nye has a faith in his ability to change minds despite his forlorn spirit. He insists that the most important thing a person can do to combat climate change is to talk about it. In that worldview, the debate is everything. Neil DeGrasse Tyson calls Nye the science teacher everyone would want in elementary school. He may have aged into the professor you wish you hadn’t taken in college, but his willingness to take the fight outside his own bubble should be one more lesson to inspire his fans. Bill Nye: Science Guy is a revealing pleasure about a man on a mission to make America remember the thing that made it great: its investment in scientific innovation. It is full of insights, but one has endured from the opening credits of that old TV show:

Science rules and so does the science guy.