When Chelsea Wolfe released Pain Is Beauty, her strongest album to date, back in 2013, the musician’s songs were perched on the precipice between Goth beauty and metal darkness. With subsequent release, Abyss (2015), Wolfe moved further away from the delicate sadness that made Pain Is Beauty so emotionally wrenching and towards heavy sounds. This year’s release, Hiss Spun, finds Wolfe fully embracing her metal side, and judging by the crowd that attended her sold-out Portland show—decked out in black jackets and nose rings, with some even tattooed on their throats—it appears that one-half of her fandom has totally devoured the Los Angeles singer.

Wolfe and her band took the stage, red lights creating an inferno behind them. Dressed in a black flowing dress, eyes circled with dark makeup, clad in improbably long-heeled shoes, Wolfe’s attire was appropriate for it being the Day of the Dead. However, this isn’t likely a one-time thing. This is Chelsea Wolfe, the artist, emerging from bouts of crippling stage fright and embracing the darkness. Considering that the last time I saw her, Wolfe’s bus had been robbed and all she had were street clothes to perform in, this transformation felt particularly dramatic.

Wolfe began her hour-long, 13-song set with new song “Spun,” a darkly ominous foray into pure metal. Though it was a little difficult to hear her vocals over the loud music, Wolfe’s refrain of “Heavy love/ Coiled and spun” set the tone for the entire evening as she concentrated mainly on new material. Her fans at the lip of the stage reached out for the singer, but she stared wide-eyed into the void. Perhaps it was the stage fright, perhaps concentration, but Wolfe sang to a ghostly muse who was not corporeal that evening.

The first half of the set was nothing but metal. Sara Taylor, from opener Youth Code, stepped in to supply Aaron Turner’s snarl on “Vex,” while Wolfe’s soprano hovered over the doomed sludge of “Particle Flux.” When Wolfe finally reached back for an older song in “Carrion Flowers,” it was yet another performance of head-splitting riffs. Only when “After the Fall” appeared halfway through the set did the feedback abate a little and Wolfe stepped towards the other half-side of her output.

That’s not to say this heavier Chelsea Wolfe is any less compelling than her darkly delicate older material. The crowd did cheer heaviest during the one-two Pain Is Beauty punch of “Feral Love” and “The Warden,” yet new songs “The Culling” and “Twin Fawn” also contained elements of beauty under the sludge.

Wolfe handled the first song of her encore, “Halfsleeper,” alone on an electric guitar. Reaching back nearly a decade to The Grime and the Glow may have been a risk, especially for this unadorned performance, but the song tucked in well with the rest of the set. The band rejoined Wolfe to finish out the night with new song “Scrape,” and as she sang, “My regret will never consume me,” it was a good time to realize Wolfe’s evolution as an artist is about nothing but her own path, and we can take it or leave it. 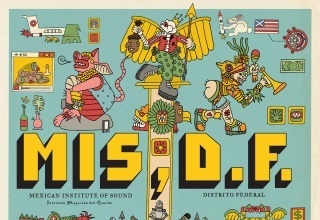