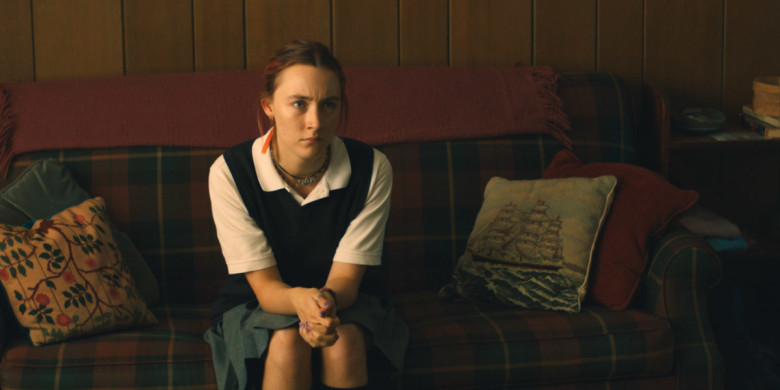 Lady Bird has the specificity required of any truly universal youth movies, a personalized, keenly observant eye that draws broader meaning from intimate detail. The title refers to the name that Christine McPherson (Saoirse Ronan) gives herself as an act of quiet self-determination, a muted protest that seems so important to her while being, at most, a minor inconvenience to others. Gerwig, whose writing contributions to Frances Ha and Mistress America retained Noah Baumbach’s hyper-critical approach but softened its acrid tones with genuine warmth and empathy, brings similar skills to bear upon Lady Bird’s petulant acting out. The hollow defiance of the girl’s attitude is made clear from the outset, but Gerwig nonetheless understands the impetus behind it.

Living in Sacramento, Lady Bird finds the town stultifying and dull, and dreams of heading off to college in a glamorous city such as New York. Among the obstacles in her way is her own academic performance, which finds her struggling at a Catholic school. Her mediocre grades contrast sharply with her feelings of superiority, and the film balances her understandable chafing at her school’s conservatism and the general tedium of high school with the tacit critique of her own lack of distinction.

Gerwig has fun with the awkwardness of Catholic school, of dances where nuns intervene to “make room for Jesus” and of assemblies where speakers give absurdly tearful speeches about how they could have been aborted, but weren’t. Yet there are also grace notes to the school, most especially in Sister Sarah Joan (Lois Smith), who radiates such wisdom and care that even when Lady Bird pulls pranks on the nun, she shows deference and affection to the woman.

Lady Bird’s relationships to friends and love interests is equally fleshed-out. Beanie Feldstein plays her best friend, Julie, another lower-middle class kid at the preppy Catholic school, with a more lighthearted variant on Lady Bird’s caustic sarcasm. Both girls feel pressure to step outside their usual routines as they gear up for college, but while Julie works on her grades, Lady Bird decides to boost her social profile by bluffing her way into friendships with richer, more connected kids, ignoring Julie and opening an outwardly muted but nonetheless intense rift.

Meanwhile, Lady Bird’s first romantic dalliances show off funny but unexpected dealings with young men. A sweet theater kid (Lucas Hedges) initially seems like an ideal match until a twist first plunges them into conflict, then into an intensely trusting friendship that the film rightly positions as being just as vital to development as romantic relationships.

Then there’s Kyle (Timothée Chalamet), a moody, arty kid whose affected dispassion and detachment entices Lady Bird but ultimately forces her to confront the implications of her attempts to seem cool. Kyle is the closest thing to a stereotype in the movie, though amusingly he plays much the same character he does in Call Me by Your Name, albeit with that role’s projected maturity and sensitivity replaced with acrid pretentiousness. Yet even he offers complexity in a scene where Lady Bird loses her virginity, a clumsy, fumbling scene that rapidly devolves from romantic to uncomfortable, with Kyle lazily having this nervous girl do all the work as he rises to a quick finish. Her disillusioned aftermath is hilarious in spots (her outburst “Whose first time is on top?!” is delightfully specific and outraged in a way a man would never think to write), but also heartbreaking as she realizes that she was not taken advantage of, exactly, but nonetheless subconsciously used.

The film’s most piercing insights, though involve Lady Bird’s home life and her relationship with her parents. Tracy Letts brings a forced calm to her father, Larry, a man struggling with ongoing depression and the brutality of ageism in a field actively seeking to throw over its older workers to replace with faster, cheaper young labor. Larry’s affably square demeanor acts as a foil for the forthrightness of his wife, Marion (Laurie Metcalf), whose combative relationship with her daughter forms the true heart of the movie. Metcalf brings all the acerbic, withering wit of her time on “Roseanne” to Marion’s interactions with her daughter. But where that insulting behavior fits with a larger give-and-take of sitcom exchanges, here she can seem downright cruel, blowing up every actual and perceived failing of her daughter into proof of complete moral failure, and seemingly no compliment can be given without some backhanded swipe that completely undermines the brief moment of warmth.

Yet where other movies might have seen fit to simply portray Marion as the source of Lady Bird’s misery and the monster to be overcome by leaving home, Gerwig’s film digs under the surface of contentiousness to reveal complex, seemingly irreconcilable truths about both Marion and her relationship with her daughter. As the family’s already modest finances crater, one can see Marion’s reactions to her daughter’s flippancy and ingratitude as the boiled-over fury at much larger, faceless forces, a refusal to accept such behavior from someone who costs so damn much to upkeep. Buried within that reaction is the equally ferocious sense of failure of being unable to provide what her child desires, of hating Lady Bird’s quest to leave for the East Coast not only for its obvious attack on her but for having no possible recourse to aid her daughter’s dream.

That informs some of those loaded compliments, as when the two go shopping for Lady Bird’s prom dress and Marion lobs a few hurtful comments that seem more a way to steer away from more expensive selections without admitting to being unable to afford them. There are also moments of incredible, overwhelming tenderness between the two, such as when Marion picks up Lady Bird after her disastrous time with Kyle, recognizes immediately that something is off and immediately drops her usual acid to provide comfort and love to her confused, emotional child. Theirs is the best cinematic mother-child relationship of its time, grounded in foibles that feels so real because Gerwig devotes as much care to Marion as to her child. Too many indies, especially ones explicitly focused on youth, have no understanding of older generations and do not care to gain any. But the deep wells of sympathy and empathy that Gerwig and Metcalf bring to Marion are what set the film apart, even above the textured, multivalent reading of the protagonist. In Marion, Lady Bird reveals the true extent of its observation, confirming Gerwig as one of the finest, most insightful filmmakers emerging in the American independent scene.