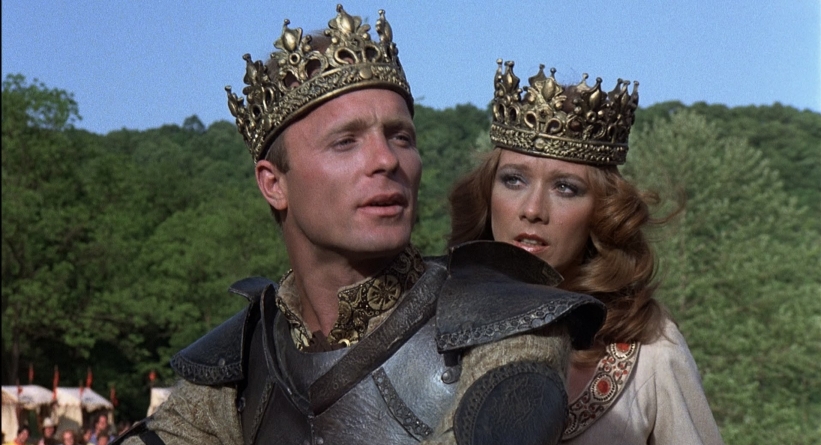 Knightriders still has the power to allure outside its minuscule cult following.

The surprising success of Dawn of the Dead made George Romero an object of desire for Hollywood studios. He understood something executives at Universal, Paramount and Warner Bros. did not about the tastes of American audiences. In 1979, Romero represented a market inefficiency studios wanted to exploit. He was a modern master of horror who made hit movies on a pittance, and his undead chronicles created a moment when he could have had any gig he wanted. Though he was coveted, Romero turned down all offers from major studios and opted for a three-picture deal from United Film Distribution Company. The Pittsburgh, PA auteur earned the stable independence he wanted with one caveat: one of the movies had to be a Dead sequel. Besides that stipulation, Romero was free to do what he liked, and what he chose to do first was Knightriders.

Knightriders is the story of a travelling Renaissance festival that tours the small towns of the American Midwest. Everything from the roasted chickens and corn-on-the-cob to jugglers and jousting will be familiar to anyone who has ever gone to such a festival. What makes the festival in Knightriders so boundlessly cool is that the knights perform their acts of skill and battle while riding motorcycles.

Released in 1981, the movie is a reaction to what the country was becoming at the dawn of the age of Reagan. People were still trying to make art to caution us about the culture of consumerism that is everyday life decades later. McDonald’s and Walmart had only begun to spread like cancers on the mom and pop eateries and shops on every Main Street. The ink was still wet on the legislation that would deregulate consumer protections and allow the wealth of the trickle down decade to flow ever upward. Romero offered an alternate vision in Knightriders of a group trying to live as a separate society outside the cultural norm by focusing on its king, Billy Davis.

Billy Davis, or King William, is the keeper of the code. He believes in truth, justice, fairness, integrity and chivalry. His troupe is his kingdom, and there is a hierarchy with Billy and his queen at the top, followed by his knights and finally the craftspeople. Billy takes on anyone who wants to join his people – no matter their race, creed or sexual orientation. It is a progressive company travelling around a country too satisfied with its ignorance and conservatism. For Knightriders to work, Romero needed an actor who could convey the conviction and intensity required of Billy Davis. The character is relentless in his integrity, refusing to bend to sleazy promoters who could help him or corrupt cops who could be easily paid off. You have to believe that this king who never compromises could inspire people to follow him. Luckily for Romero and the world, Ed Harris was ready to be discovered.

When the movie begins, Billy is beginning to crack. The strain of maintaining his own society is causing dreams of his own death and erratic behavior during performances. Self-flagellation is part of his morning ritual, but he can’t harden his body against past injuries. He continually takes to the field to battle Morgan, the Black Knight, played by a scene stealing Tom Savini, to greater and greater harm. Meanwhile, the audiences are growing and word about the motorcycle knights spreading. Promoters are interested, and slick magazine articles are being published – all of which Billy despises. His people want to find ways to compromise with the outside world for a little more comfort, but Billy refuses. As he tells Queen Linet, “I’m fighting the dragon.”

Harris has never lacked intensity in any of his roles, but he is also able to show the sort of charm that would inspire people to join Billy’s roving cause. The group eventually splinters, with Morgan taking his faction to form a new kingdom with a big money promoter and Alan (Gary Lahti), Billy’s handsome second, riding off after losing a battle with his king. Humbled, Billy doesn’t move the troupe, believing his wayward knights will return when they realize the world offers nothing as special as he does. Eventually, they do return, and Billy finally allows Morgan to battle for the throne.

Romero says this is his second favorite of his films, with Martin being the first. It is a deeply personal film, a metaphor for his life at the time. The Renaissance festival represents his filmmaking apparatus in Pittsburgh, and Billy Davis is the stand-in for Romero, the uncompromising auteur who is trying to keep Hollywood from stealing his troupe. Romero seemed to be working out his own prophecy at the time. Billy Davis isn’t any better at holding back the tides of change than the man who created him. And while Knightriders should be considered a near-classic of American cinema, knowledge of it is obscure. The film went unseen during its initial release, and that lack of interest kept Romero from deviating out of horror for the rest of his career. He finished his deal United Film Distribution Company with Creepshow and Day of the Dead. The zombies giveth and the zombies taketh away.

While being an artifact of its time, Knightriders still has the power to allure outside its minuscule cult following. Independence is its theme, and the anti-consumerist factors that inspired Romero to create it have only been exacerbated by globalization. The corruption at the beginning of the ‘80s pales when compared to what we are inured to today. It is a constant, oppressive weight. Knightriders is a beautiful film about freedom, community and the relentless, creative American spirit. It is a reminder that it is still possible to find frontiers on the interstates even if they are only of the spirit. Romero laid the template for the zombie world we live in. It’s just a shame that we don’t have more of an appetite for fighting the dragon.