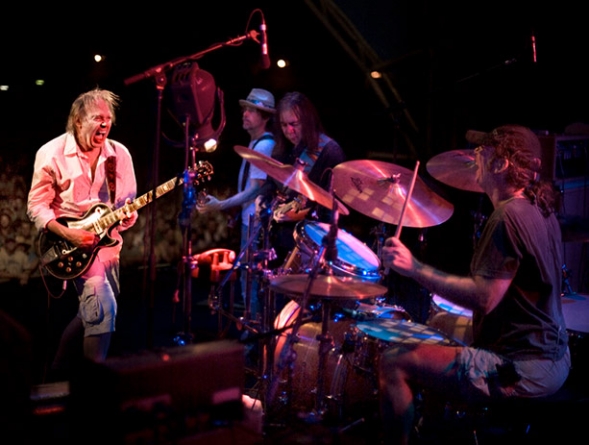 Trunk Show stands out immediately as a response to 2006’s Heart of Gold.

Never the most exciting genre, concert films seem to intrinsically lack some essential cinematic spark, serving as a paltry communicator of the communal joy of witnessing a truly rousing live performance. Add in the fact that so many retain the draggy, choppy pacing of live shows and settle for staid, rudimentary methods of presentation, further side effects of the general difficulty of turning inherently restricted stage-bound action into something dynamic on screen. Accounting for all this, a trilogy of performance movies about a late-career classic rocker seems like the stuff of nap-inducing tedium. True to form, Neil Young Trunk Show may not win any new converts, but the film benefits both from its brief running time (blessedly under 90 minutes) and the steady hand of its ever-curious director, who uses this often-barebones format as an open call for exploration and experimentation.

Trunk Show stands out immediately as a response to 2006’s Heart of Gold, which covered the big release show for the 2005 album Prairie Wind at Nashville’s Ryman theater, historic home of the Grand Ole Opry. Taking advantage of the novel, ornate setting and a huge cast of collaborators, Demme presents this as a vintage stage spectacular whose golden-hued lighting and nostalgic tone are broken up by the content of Young’s material, which often touches on themes of death and loss. The interweaving of past and present is formalized in the split between the film’s first half, full of new songs that sound old, harking back to classic mid-century country and beyond, and its second, which features classic Young material, familiar now but revolutionary in its time.

Trunk Show covers a much different concert a few years later, one staged in support of 2007’s Chrome Dreams II. This show is overtly darker in both tone and lighting, the movie starting in media res and featuring more older tracks, more extended improvisations and more flirtations with scratchy atonal fuzz. Where the previous film emphasized open space and a clear view of the supporting players, this one deals in clutter and junk, as Young scruffs up careworn material with extended vamps and solos. Weird corollary touches abound, from a mysterious painter working off to the side of the stage, to brief flashes of a nine-paneled, “The Brady Bunch”-style presentation offering a fly’s-eye-view of the performance.

I saw Young myself around this time, on a different leg of the same tour, and recall being struck by his vigorous stage presence, straddling gales of distorted guitar with a convulsive, broad-legged T. Rex stomp. That pose shows up here in spades, along with a few other inspired bits of bodily contortion, waggling his trunk like a piece of limpid sea grass as he plays an acoustic guitar atop a stool, or affecting a jangly marionette wriggle as he plucks away on a banjo. Demme makes a great display of these sumptuously weird stances, focusing in on the spectacle of an old master playing without pretension or self-consciousness, attuned to the changing shape of his songs.

Bathed in shadow but never mysterious, the late-period Young presented here recalls Dylan without the caustic edge, self-promoting leer or manufactured air of inscrutability. This all fits in with the larger Demme ethos, which strives to capture the genuine activities of people as they foster open-hearted connections with others. Chaotic but never claustrophobic, Trunk Show thus locks in comfortably with the other pieces of Demme’s Young trilogy, which together stand as the opposite of something like the The Last Waltz, a procedural tour through the small shifts, big changes and everyday camaraderie of presenting live music. From the 1985 video for New Order’s “The Perfect Kiss” to his final concert movie, last year’s Justin Timberlake + the Tennessee Kids, the director’s view of music has always been structurally focused, viewing musicians less as stars than surface adornments, eschewing the allure of celebrity magnetism for a more textured analysis of the holistic nature of performance.

Here all the glamour and hushed majesty of stadium rock, and its attendant dispensation onto hordes of screaming fans, gets excised in favor of something more introspective and process-oriented. Young becomes just another guy in his late sixties doing a job, getting a cup of coffee backstage before going on again post-intermission, having a troublesome fingernail filed down so he can get a better angle on his guitar strings.

As Heart of Gold ended, its elaborate presentation is suddenly stripped away, segueing to a low-angle shot of Young strumming alone on the grand stage. When he’s finished, he packs up his guitar and walks away. Here, the clutter only accumulates further, as a mishmash of outtakes and credits lead to an instrumental performance of “The Sultan,” a track from the singer’s pre-solo, ‘60s guitar rock days, accompanied by a man in a cartoonish genie suit banging away on a gong. Throwing solemnity to the wind (and bringing back that bizarre nine-eyed camera) Demme confirms Young as an artist who contains multitudes, just like the rest of us.