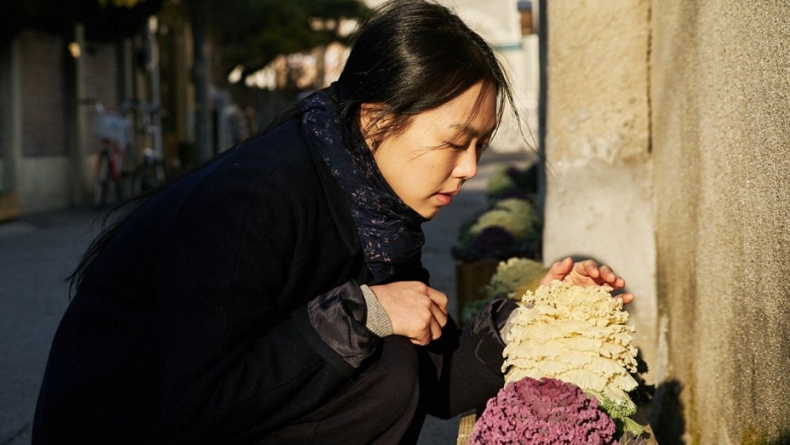 On the Beach at Night Alone Ryne Clos

On the Beach at Night Alone is a film constructed around long conversations, with very little action taking place. Most of the film consists of people gathered around tables, park benches and beach fires talking about their relationships and careers. It does not work; the film is never compelling and is often not even interesting. Exacerbating the lack of energy in its scenes is a static-camera and long-take cinematography that only further dispels any life from the film. The film is especially disappointing considering director Sang-soo Hong’s consistent record of churning out quality work.

On the Beach at Night Alone is centered on Young-hee (Min-hee Kim), an actress in the midst of a personal crisis after being caught in a scandalous affair with a much older, married director. Most of the details about the affair are withheld from the viewer, and even the few that are eventually revealed are obscure. It seems that such withholding is intended to pique interest or generate suspense for a big reveal—which never comes—but the viewer is never given any reason to invest in Young-hee or the story of the affair.

Throughout the film, Young-hee bounces from one friend’s house to another in a self-imposed exile from Seoul. The locations where she crashes with her various friends are not revealed. In fact, On the Beach at Night Alone resorts to a rather annoying convention of having the characters refer to their towns of residence as “this place” or “in this town,” as if that is the way normal people may talk. As with the lack of exposition regarding Young-hee’s affair, the film does not offer any explanation for its refusal to reveal the locations where Young-hee seeks refuge among her friends. One such place is supposed to be in Germany, where it’s made plain that she spent several months. She also spends time in a South Korean seaside tourist town, but overall the settings remain mostly anonymous.

The film’s visual style is also to blame for its failure to garner interest from the viewer or any buy-in to Young-hee’s plight. It’s comprised mostly of long, still shots of conversations. The camera may initially follow Young-hee or another character into a room or some other space, where it will often slowly pan across the area before coming to a rest, with the characters involved in the scene securely in the frame. For the next four to seven minutes, neither the camera nor the characters move. In this way, the camera captures their conversation. While this is the way most people have conversations—in static positions and a single point-of-view—it makes for rather dull filmmaking. There’s a reason for the convention of cutting from a one-shot of a speaker to a one-shot of the other speaker in a two-person conversation: namely, it adds a freneticism to the exchange that keeps the viewer engaged.

Long and steady filmmaking works for some stories and for some directors, particularly the Philippine exemplar Laz Diaz or Sergei Loznitsa’s breathtaking Maidan. Here, however, it reads as unimaginative and lazy. The only truly engaging shots in the film are two scenes at two different beaches, which rely upon the gray gloom of the sea and a cinema-history callback to L’Avvenura to conjure a metaphor of identity loss and personal catastrophe, the sort of symbolic meaning-making that is a hallmark of Hong’s oeuvre.

The story in On the Beach at Night Alone is not without merit. Young-hee is a character worthy of exploration and there is something satisfying about her grappling with the fallout from the scandal she sparked. But this story could just have easily been told in a podcast, as the set design, camerawork and blocking add very little to the narrative here (outside of the beach scenes mentioned above). A viewer fluent in Korean could close her eyes and miss next to nothing here. Add in the film’s silly insistence on withholding information about Young-hee’s past and the whole thing seems a bit baffling.