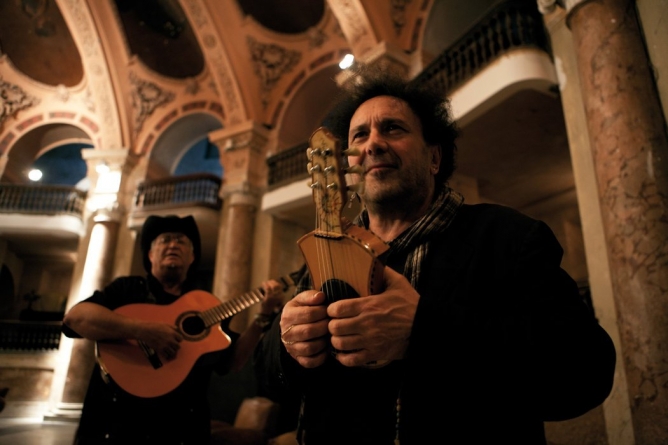 Enzo Avitabile comes across as a character from a Demme feature, one so watchable that we’ll follow him anywhere.

Jonathan Demme’s career was at an interesting point when his music documentary Enzo Avitabile Music Life was released in 2012. Having revived his critical reputation with 2004’s The Manchurian Candidate and 2008’s Rachel Getting Married after suffering the back-to-back disappointments of Beloved and The Truth About Charlie, Demme appeared to be using every tool in his well-stocked shed. His sporadic features, such as the aforementioned Rachel and 2013’s A Master Builder were carefully observed character pieces, and he spent the rest of his time making television episodes and documentaries.

While his features were character-driven, his television episodes were slick and polished, and his documentaries vacillated between being the soulful expressions of a fan (exemplified by his Neil Young concert documentaries) and explorations of human resilience (like in 2011’s I’m Carolyn Parker and 2007’s Jimmy Carter Man from Plains). His dreamy exploration into Italian music legend Enzo Avitabile’s work somehow bridges all of these disparate facets of Demme’s filmmaking ambitions, making it all the more poignant to return to now that Demme is no longer with us.

Yes, Enzo Avitabile Music Life is mostly about the musical talents of the crazy-haired, wonderfully expressive Avitabile, and Demme treats us to an abundance of jam sessions and more formal performances. But this documentary is also concerned with Avitabile’s home of Naples, Italy as well as with Avitabile’s relationships with his family, his faith, his neighbors, his fans and with the greater music community. Demme’s camera, so precise in his features, wanders hazily here, catching glimpses of Avitabile chumming it up with global superstars and spending quieter moments alone or with close friends and family.

This relaxed filmmaking can be a bit frustrating if viewers don’t give themselves over to the experience. Just as he does in his most subtle feature work, Demme resists easy categorization here, and searching for one shining highpoint within Enzo Avitabile Music Life is an exercise in futility. But the flow of the camera along the streets of Naples, onto the faces of Avitabile’s local admirers and zooming in and out on the musician’s mischievous face, is intoxicating. The secret is in the title. Rather than focus on Avitabile’s accomplishments as an artist, as a citizen, as a performer or even as a father, Demme uses a casual, unvarnished approach to document Avitabile’s life as he is living it.

As such, Enzo Avitabile Music Life wasn’t as well received as Demme’s concert documentaries and certainly wasn’t as lauded as his most successful feature work. Viewers and critics alike pointed to the casual nature of Demme’s approach and some called his warmhearted treatment of Avitabile and his community clichéd. But the casual nature is, in fact, what makes Avitabile’s life appear here as genuine. So many documentaries feel staged, the interactions manipulated and the “aha” moments over-edited. Demme instead chooses to just tag along here, allowing Avitabile’s life to pour out as it will. The editing is there, but the filming is authentic and the interactions come across as real. Demme’s point is that in an industry that sees so many artists over-managed, Enzo Avitabile is out there living a real, wonderful, frustrating musical life.

While this documentary may not be as cinematically satisfying as other entries in Demme’s résumé, it does give us a clearer look at what drives the filmmaker and his eye. Demme’s keen observation of the talents and contradictions of Avitabile hints at how he was able to build complex characters like Hannibal Lecter, Kym (Anne Hathaway’s signature role from Rachel Getting Married), The Manchurian Candidate’s Raymond Shaw (Liev Schreiber) and Philadelphia’s Joe Miller (Tom Hanks), characters who are simultaneously sympathetic and confounding. Enzo Avitabile comes across as a character from a Demme feature, one so watchable that we’ll follow him anywhere.