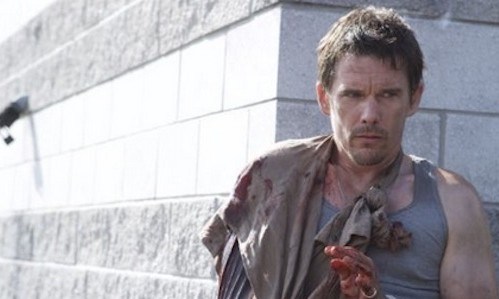 24 Hours to Live is a far cry from such recent geri-action movies.

Brian Smrz’s 24 Hours to Live is an abysmal action genre exercise that coasts on familiar tropes. Following all the usual beats and clichés to the point where it feels more like a simulation than a movie, this international story of conspiracies and assassins yields few surprises, and Ethan Hawke’s leading role as an aging killer with a dark past never feels right.

Hanging out in the Florida Keys with his fishing buddy Frank (a woefully underused Rutger Hauer), semi-retired assassin Travis Conrad (Hawke) is called in for one last job. Private contractor Red Mountain is threatened by whistleblowers, so the killer is tasked with travelling to South Africa to kill Interpol agent Lin (Xu Qing of Looper) and Keith Zera (Tyrone Keogh).

Conrad has second thoughts when he learns that Lin is a mother; he also sleeps with her. This romance, if it can be called that, lacks a crucial tension, and the filmmakers seem to be aware of this. So a series of hallucinatory flashbacks and dream sequences (shot in Conrad’s out of focus and shaky POV to show his traumatized headspace) reveals that the contract killer himself mourns a wife and son, and is not going to let another woman and child die because of him. After Conrad botches the hit, he wakes up in the hospital to find that he’s been subjected to the very medical experiments that Red Mountain’s CEO (Liam Cunningham) wants to protect. The killer’s assignment now has a more pressing urgency: he has 24 hours to get the job done—or die.

The filmmakers are not smart enough to play with the heavy issues of human experimentation and African exploitation, and shrug off gonzo echoes of The Island of Dr. Moreau. Even though Conrad’s forearm is installed with a countdown clock that suggests the thrilling chaos of the Crank franchise, Smrz (A Good Day to Die Hard) and his screenwriters prefer a sense of order that leaves the film devoid of tension and often redundant. The movie says nothing new, and says it stupidly.

Furthermore, Hawke is miscast. The film burns through a lot of plot, leaving little time to convey enough emotional weight to make Conrad’s tragic arc believable. Surrounding performances such as that by Paul Anderson as Conrad’s buddy Jim Morrow have a robotic, heartless precision at odds with a more relaxed performer such as Hawke.

24 Hours to Live is a far cry from such recent geri-action movies as Taken and John Wick, but it’s not for lack of trying. Smrz and his charges flex their muscles, setting the film in multiple international locations, but those pecs and locales are sadly unconvincing. Nothing has time to settle in in, and formula is favored over originality in a movie that has as much authenticity as the CGI blood it liberally uses. In the end, the film’s fleeting pace is its only asset; at least this dull, forgettable action movie ends quickly.

CM Gardner is a Schenectady-based cinephile, writer and product of the internet. His interests are film, television, music, Frank O'Hara's poetry, non-fiction writing on the 20th century, the NBA and the New York Mets. He can be found on Twitter at @juvie_cinephile where he is wont to shed an opinion or several about Looney Tunes, Inherent Vice, or The Beach Boys-- sometimes all three in one tweet.