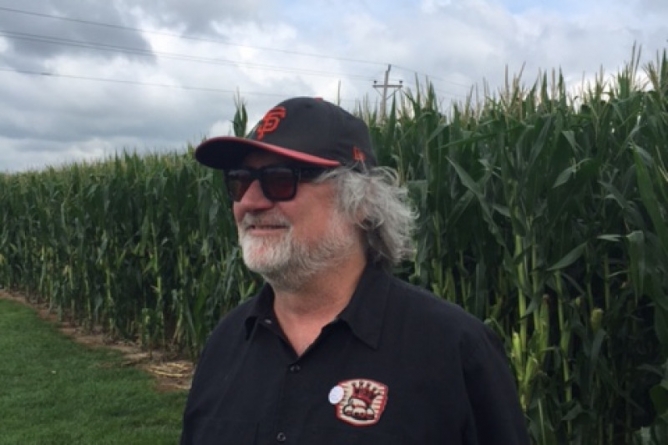 If you are a music fan in Portland, you know Scott McCaughey.

If you are a music fan in Portland, you know Scott McCaughey. Besides being the leading force of the Minus 5 and sideman in multiple bands ranging from R.E.M. to most recently Filthy Friends, McCaughey is an omnipresent fixture in the crowd at Portland shows. Everyone has a McCaughey story here, especially those of us who often see live music. I’ve run into McCaughey at shows ranging from the Who at the Moda Center to Conor Oberst at the Oregon Zoo to Cracker at the Aladdin. How can you miss him with his shock of white hair and signature sunglasses?

Sadly, McCaughey suffered a stroke in San Francisco while out on tour with Alejandro Escovedo in November. A GoFundMe, established by McCaughey’s wife Mary Winzig, swiftly raised more than $115,000 to help offset McCaughey’s medical costs and physical therapy as many musicians and friends donated to the cause.

“Scott is one of the most supportive people I’ve ever met in the music biz,” said Portland singer-songwriter Fernando Viciconte, who met McCaughey through mutual friend Peter Buck. “He has always bent over backwards to help me and other musicians accomplish their musical visions.”

In order to raise more money for McCaughey, his friends will host a two-night Help the Hoople event. On Friday, January 5th, Escovedo, Viciconte, Buck, Corin Tucker, Justin Townes Earle and more will play the Star Theater while the next day, the Decemberists will join many of the same musicians at the Wonder Ballroom.

“I have always loved the concept of music as community and Scott exemplifies that ethos more than anyone I’ve ever known,” said Casey Neill, who will be performing at the Wonder Ballroom show. “He creates a warm atmosphere of family around the musicians he works with and he really champions other bands and songwriters. I’ve met so many great people from around the world as a result. It’s built into the concept of The Minus 5 – be a member even once and you’re in it for life.”

It makes sense as McCaughey is usually surrounded by the likes of Tucker and Buck at shows and even out to dinner in town.

“We are best friends,” Buck told me in an interview this past summer. “We work together well. It’s really good. I can trust him. I know what he’s going to do. He’s got a wild sense of where to put notes and how to play them.”

Buck isn’t the only one who counts McCaughey as a close friend. Patterson Hood, co-founder of Drive-by Truckers and recent Portland transplant, also admires McCaughey.

“He’s a total sweetheart of a human being, hilarious and super talented in so many ways,” Hood said. “A musical Swiss army knife, as they say. Heart of gold and always fun to be around.”

Others appreciate McCaughey’s wild sense of adventure on the stage.

“Ten years ago, we started playing together in a Pogues cover band called KMRIA,” Neill said. “There’s been a lot of antics as one might expect in that band – on stage pile-ons, silly string, ill-advised stage dives, mandolin smashing and the like. At some point Scott asked me to sit in with The Minus 5 first as a guest singer and then as a guitar player. Since then I’ve been in the regular roster of Minus 5ers for shows around the Pacific Northwest and a bit in the Northeast too. My wife and I live a handful of blocks away from him and Mary and we often enjoy the neighborhood food and drink.”

In addition to the benefit shows, an online auction has also been established to raise money.

“We have signed guitars from Pearl Jam, the NY Dolls, R.E.M., signed posters and LPs from Dream Syndicate, Drive by Truckers and many others,” said Josh Taylor, who helped establish the benefit shows. “[We have] advanced copies of Willy Vlautin’s new book which won’t be out until March, concert tickets, a year’s supply of Voodoo donuts, signed baseball memorabilia and more items being added every day.”

McCaughey’s kindness even touched this magazine. Not only has he done a few interviews with Spectrum Culture, he donated a Minus 5 performance to a benefit show we put on for the Alzheimer’s Association. Even there, his on-stage antics were on full display.

“Years ago, we were playing an Alzheimer’s benefit, a disease which has hit both of our families,” Viciconte said. “The Minus 5 had played earlier, and he graciously joined us. We were in the midst of playing “Ride,” and Scott was on keys. Right in the middle of it, I look over and watched as his keyboard stand completely collapsed and his keyboard falls straight onto the floor. Without missing a beat, Scott got down onto the floor and continued to play! At that moment, I realized, ‘This guy is the real deal.’ Nothing will stop the rock.”