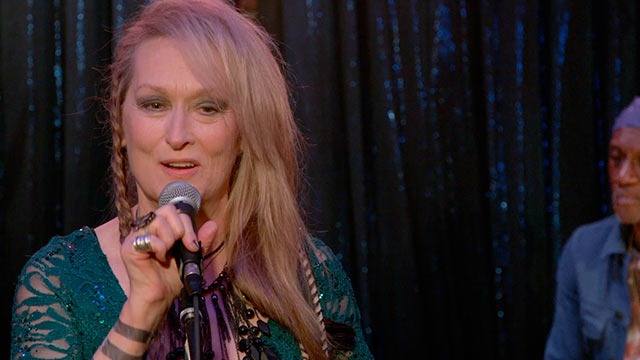 Some careers end with a bang, and others with a whimper. Jonathan Demme’s feature film career ended with neither, which feels appropriate considering the unique jumble of films in the director’s oeuvre. His final dramatic film, Ricki and the Flash, is a heartfelt, entertaining and shallow film anchored by a typically masterful performance by Meryl Streep. The film doesn’t have a fraction of the depth of his Silence of the Lambs, but it also isn’t a failure like his The Truth About Charlie. What ends up setting the film apart is what so often set Demme himself apart: music.

Ricki and the Flash effectively serves as the final installment in Demme’s trilogy of pictures concerning outcast family members returning home to seek absolution. Demme, a director who throughout his career demonstrated a refusal to repeat himself with his dramatic features, completed his résumé with a thematic trilogy. The series began with 2008’s excellent Rachel Getting Married and continued with underseen Ibsen adaptation A Master Builder. Ricki, though less critically successful than Rachel or Builder, is the most mainstream of these three films as well as the happiest.

Ricki and the Flash tells the story of Streep’s Ricki, a woman who abandoned her family to chase dreams of rock stardom. She ends up with neither stardom nor her family, playing bar gigs and working side jobs to pay the bills. She returns home to comfort her daughter Julie (played by Streep’s real-life daughter Mamie Gummer) who tried to kill herself after being dumped. Forced to face the wreckage she left behind, Ricki finds herself questioning her past and her present.

At the time of its release, some detractors of Ricki and the Flash focused on how underused and underwritten the supporting characters are here, which is notable mostly because of the quality of the supporting cast. Talented film actors like Kevin Kline, Sebastian Stan and Charlotte Rae are joined by stage stars Audra McDonald and Ben Platt, but none of them are given very much to do. However, even though the plot of the film follows a woman’s grating and gradual reunion with her family, the soul beneath that plot is about a woman and her love of rock ‘n’ roll. Fittingly, the grandest gesture in the movie is not a familial interaction but rather when Ricki’s boyfriend Steve (Rick Springfield, awesome here) sells his favorite guitar so that a cash-strapped Ricki can make it home for her son’s wedding. Ricki and Steve are true rockers—the kind of folks Demme follows in his documentaries—and this move represents the first time that Ricki and her chosen family have picked blood over rock. That’s the power of Ricki and the Flash, and Demme and writer Diablo Cody (Juno) wisely choose to maximize that power by giving us more Ricki and less of her family.

Demme filmed the music scenes (many of which feature Springfield) live, and they sound fantastic. Streep makes up for limited vocal range by infusing her Ricki with the swagger of a woman who really lives for the music. Following Demme’s death, these music scenes add special poignancy to the film, as the director split his career between dramatic features and music documentaries. By the end, it feels as if Meryl Streep has taken the stage in one of Demme’s excellent concert films, and the tethers that Ricki had to the plot of her movie fade away. Ricki and the Flash, while unsubstantial in ways, brings Demme’s two disparate careers together in a lovely tribute to the director’s eclectic but always tuneful work.