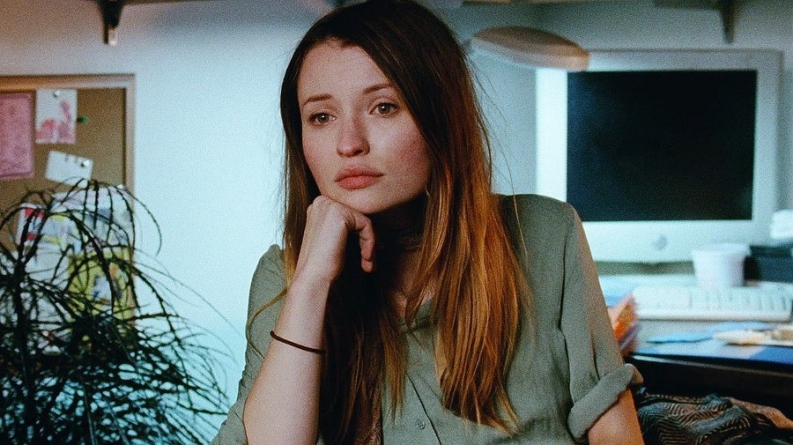 The acidic, comic dialogue that defines Alex Ross Perry’s movies is almost entirely absent in Golden Exits, the director’s first stab at a relatively straightforward indie drama. Though the characters exhibit a general sense of mistrust and passive-aggressive hostility toward each other, they reserve most of their bile for themselves, often stewing silently in a sense of dissatisfaction that they can only voice to a single trusted confidant. The despair that hung in the periphery of Perry’s other movies is now foregrounded, and at the film’s best, the characters’ inner struggles hum with silent agony.

Chief among the film’s overlapping storylines is the internship of Australian archivist student Naomi (Emily Browning), who takes an unpaid position in a Brooklyn office too small to justify the full-time employment of her mentor, Nick (Adam Horovitz), much less a second pair of hands. For Nick’s wife, Alyssa (Chloë Sevigny), the situation is entirely too suspicious, and her apprehension is not exactly unwarranted; at work, Nick awkwardly fixates on Naomi, sounding more like a flustered teenager than a middle-aged man. He takes the student to a nearby deli for lunch and proceeds to command the conversation, the camera pushed in on his face as he runs on. Naomi, in a reactive pose, is filmed with bright sunshine illuminating her face, looking angelic. But when Naomi later requests that Nick cover all her lunches since she would not have eaten out had he not insisted they do so, his enthusiasm dims for a moment when he abruptly criticizes her work, not with outward malice but a subconscious sense of wounded pride.

Gradually, the broader story falls into place around these two. Naomi meets up with Buddy (Jason Schwartzman), a former paramour from her first time in the city, and where she exudes a lack of romantic interest in Nick, there’s still a tinge of attraction toward the now-married Buddy. She asks him how many more times they can see each other without his wife before it becomes uncomfortable, and Buddy responds “two” without hesitation. Nick and Alyssa’s marriage comes under greater scrutiny, revealing cracks that were present well before Naomi arrived but are now widening irreparably. There’s also Sam (Lily Rabe), the bitter sister of Buddy’s wife, Jess (Analeigh Tipton) and assistant to Alyssa’s sister, Gwendolyn (Mary-Louise Parker). Sam is living a millennial existential crisis, entering her 30s with nothing to show for her time on this Earth and teetering on alcoholism from attempting to cope with a life that has turned out so unspectacular.

Where Perry usually elucidates the characters’ frustrations and myopia through humor, here they largely reserve their feelings to air out in long, messy monologues in which all of the subtext is made text. Sam’s inebriated rants are the most obvious example, morose speeches to Jess about how an uninspiring career only calls further attention to the lack of offsetting emotional validation to make a dull job bearable. But there’s also Nick’s masculine crisis, aired in private and as the nominally nice, mature man in his gaggle of boisterous, lecherous friends. Gwendolyn barely meets Naomi before she begins to unload her distrust of Nick, while Naomi herself has the most nakedly metaphorical inner fear as a wannabe archivist who frets over a transient life with nothing of her own to document her life. Perry has always aspired to a literary quality in his scripts, most notably with the Philip Roth nods of Listen Up Philip, but Golden Exits feels more like a clumsy attempt at a play, with each character-illuminating monologue stuffed with elaborate sentences that smugly testify only to their writer’s verbosity. Case in point: Sam’s downright stupefying line, “What a delight it must be to function as my sole outlet for a never-ending barrage of introspective blather regarding the choices that I made.”

To the film’s credit, Golden Exits ducks the self-gratifying manner in which most ensemble movies about intersecting characters reveal their intricate ties. If anything, the film points out how incestuous big-city life can be when another character is revealed to have even more connections to this small group. There are moments in which Perry digs deeper into his characters and produces insights worthy of his earlier work, as when Nick leaves his own guys-only birthday party supposedly in disgust of his friends’ lascivious comments, only for him to suddenly walk all the way to Naomi’s apartment and reveal a darker, casually manipulative side to the young woman who spots and dismisses it instantly. The actors are uniformly excellent at handling the unwieldy material; Browning has never been better than as Naomi, at once a projection of innocence and someone who is both keenly aware of unwanted advances and blithely unaware of her own, while Rabe turns what might have been a cheap-shot at millennial angst into a resonant portrait of neurotic implosion. Sean Price Williams continues to lend gorgeous cinematography to Perry’s work, here opting for pink-hued 16mm that recalls independent cinema of the early 1970s. Yet the soft dissolves and warm colors of the retro styling also further reveal the film’s shortcoming: Perry looks too wistfully at the past with this picture, ignoring the tonal revisions of bleak comedy that previously made his throwback aesthetics feel nonetheless new and invigorating.