Gary Oldman is likely the only actor who can claim to playing both Sid Vicious and Winston Churchill. Both men occupy disparate corners of the English identity, however, one is definitely held in higher esteem. Yet, you don’t see generation after generation of young people, faux punks and otherwise, wearing Churchill T-shirts.

We have a fascination with rock stars who expired young: Kurt Cobain, Jimi Hendrix, Janis Joplin and more. It’s impossible to imagine these legends easing into their later years. Cobain would have turned 50 last year, a milestone seemingly impossible to imagine while he was alive and completely impossible to envision now that he has gone. Rock ‘n’ roll doesn’t have to be tragic, but, if you believe Alex Cox’s 1986 biopic Sid & Nancy, death was the only option for the Sex Pistols bassist.

Viewing Sid & Nancy more than 30 years removed from its release, and 40 years removed from the violent birth of punk rock, makes the film feel more like an artifact, especially now that we know just where the punk movement ended up. Emerging as a response to the slick, sentimental music that dominated the early ‘70s, punk spit in the eye of record companies with its DIY aesthetic and “fuck the establishment” attitude. Of course, the record companies bought in and defanged the entire movement. By the time Cox put out Sid & Nancy, Margaret Thatcher and the Conservative Party held the UK in its paralyzing grip while over in the United States Ronald Reagan was doing the same. The time was nigh for someone to flash two fingers at the staid folks in charge. Sadly, it took Cox’s revival of Vicious, who died of a heroin overdose in 1979, to fan the flames of punk. 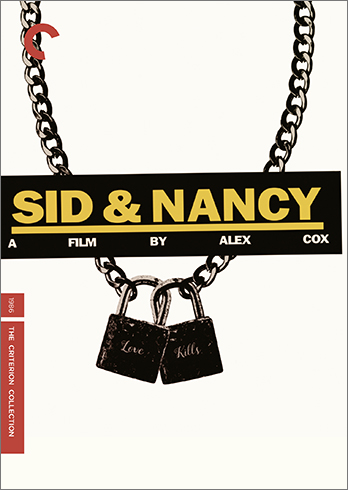 Less a paint-by-numbers genesis of the short-lived Sex Pistols than a deconstruction of the demoniac relationship between Vicious and junkie paramour Nancy Spungen (embodied by Chloe Webb) and split between the rise of the Sex Pistols in England and the fall of Vicious and Spungen after they moved to New York, Sid & Nancy neatly dodges many of the pitfalls that bring down most biopics. While Cox does slavishly recreate some of the Sex Pistols’ defining moments, he doesn’t adhere to the connect-every-dot of hitting marks from which the genre so often suffers. The hallucinatory moments of the second act, as Vicious and Spungen succumb to drug addiction, allows the director and his actors the opportunity to stretch out and really explore.

Leonard Cohen once sang of a woman who “showed you where to look among the garbage and the flowers,” a line fitting for the harrowing beauty of Sid & Nancy. Vicious and Spungen live in squalor and Cox takes us from one wrecked apartment to another, ending in the infamous Chelsea Hotel where Vicious eventually stabs his lover. Yet, Sid & Nancy is sympathetic to the couple and portrays the death as accidental. In many ways, it’s less about the death of Spungen and more about the demise of the romantic swing of a movement birthed on the fervor of youth.

Just like Cobain, it is impossible to imagine Sid Vicious as an old man. Johnny Rotten, Vicious’ Sex Pistols party, embraced the cynicism of the ‘80s, even though he created arguably better music with Public Image Ltd. than he did with the Sex Pistols. However, even Rotten wasn’t immune to the charms of capital, launching the so-called Filthy Lucre reunion tour in 1996 that saw the Sex Pistols play 78 dates over six months. Meanwhile, Vicious smolders in his grave, perhaps the true embodiment of the punk movement, a reluctant symbol who never has to deal with the indignities of growing old. Neil Young may have namedropped Johnny Rotten in “My My, Hey Hey” but it’s Vicious he was really singing about.