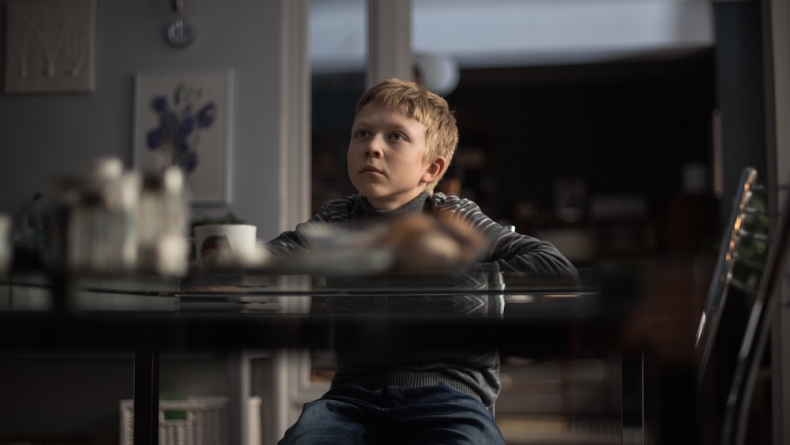 A gloomy parable of an abused and forgotten child, one conducted with all the turgid bathos of a clunky Victorian melodrama.

Andrey Zvyagintsev’s 2003 debut The Return was structured around the dicey spectacle of children in peril, its adolescent sibling protagonists grappling with the reemergence of their estranged father on a particularly perilous camping trip. In that film, however, the gamble of giving sole priority to this potentially manipulative scenario had both cause and merit, literalizing an interior emotional conflict and illustrating an imperiled national ethos, menaced by the overbearing specter of its past. Since then, the Russian director has grown in acclaim and influence while straying further from any coherent message, settling for an increasingly rote miserablism, focused on pat misanthropic statements about a self-centered, fundamentally hollow culture. This progression continues in Loveless a gloomy parable of an abused and forgotten child, one conducted with all the turgid bathos of a clunky Victorian melodrama.

Zhenya (Maryana Spivak) and Boris (Aleksey Rozin) are a former couple in the final stages of divorce, trapped together in a beautiful apartment, in a city where the sun never comes out. Desperately waiting for the place to sell so she can take her share of the proceeds, Zhenya stalks about the sub-divided space with bitter fury; Boris returns from work late, when he bothers to at all, and sets up camp on the couch. The apartment’s expansive windows look over a barren field in which bands of children play, their communal merriment reflecting back upon the remote loneliness of their neglected son Alyosha (Matvey Novikov), a sullen waif who’s never been given a chance to thrive. The film unfortunately doesn’t provide one either, transforming the child into a totemic trinket who will quickly vanish, his only role to remind his parents’ of their callous insufficiency as protectors.

Loveless generally keeps its dreary surroundings at a distance, pinned behind glass and densely configured outcroppings of wood and metal, although its opening scene is attached to Alyosha’s different, more naturally-rooted perspective. The film follows closely as the lone boy takes the back way through the forest on his way home from school, the camera lurking in a predatory manner that conditions the viewer to expect some sort of trouble. That danger tellingly doesn’t come from external factors but internal ones. Eavesdropping on another parental blowout, Alyosha later hears of plans to send him off to an orphanage; being a child, he doesn’t realize his parents both are bluffing, each trying to guilt the other into submission by dangling him as a piece of bait. Acting with the absolute assurance of a character reduced to a boldfaced plot point, he takes flight, the overlooked negligence with which he’s treated allowing him a clean 36-hour head start before anyone notices.

While Alyosha’s actions are rash, they’re also logical, considering how apparent it is that his parents’ post-marriage plans haven’t allowed much room for him. Zhenya is seeing a wealthy businessman whose daughter has already grown up and is working abroad in Portugal; his luxe open-plan apartment, bearing similarly open views but ensconced in the quiet splendor of the forest, isn’t exactly kid-friendly. Boris, meanwhile, is already in the process of starting another family with his much younger, plumply pregnant mistress. This hasty rebound may actually be a defense mechanism, considering his boss is an unsparing Orthodox Christian who forbids divorce and prefers his employees securely married. A co-worker relates a story about another colleague hiring a placeholder family to attend the office Christmas party, until he was able to secure himself a new one as a quick replacement.

Surveying this wretched post-martial wreckage, Loveless offers the usual withering takedown of a distractible, morally bankrupt society, while never managing anything close to a cogent thesis on how Russia’s specific issues depart from those suffered anywhere else. The film is tellingly set in 2012, and its gradual rollout of the incipient Ukrainian conflict clearly indicates some political motive, albeit one that can be tweaked depending on your particular personal sympathies. Is this instance of corollary real-world intrusion a bit of contrast, defending the Russian reclamation of former ancestral territory as an empire finally acting in defense of its own children, or does it function as a pointed parallel to the actions depicted herein, an ostensible guardian ignoring its domestic duties to seek satisfaction elsewhere? In either case, the comparison doesn’t quite jibe. In spite of its ambiguous aims, Loveless pursues them with a joyless sense of solemn assurance, armed with a roundly scolding tone and little else.