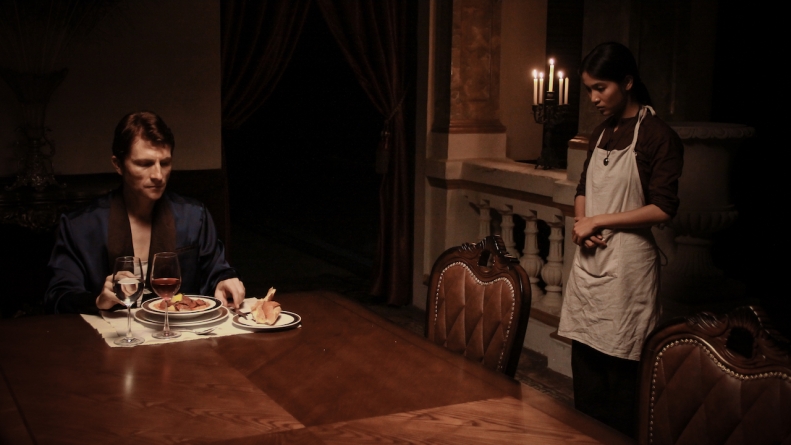 The Housemaid is a disappointment.

It’s been nearly 20 years since The Sixth Sense tied the modern ghost story into a twisted knot, created a masterpiece and made the last-minute reveal an industry standard for the upscale horror movie. The “Shyamalan Effect” has since been often imitated but no film has come close to Haley Joel Osment seeing dead people. The career of M. Night Shyamalan itself presents a case study in the fickle nature of the Shyamalan Effect. It is a narrative trick that only works once, and the imitations quickly become tiring. Despite this fact, the makers of The Housemaid are hoping it’s time for a comeback.

Written and directed by Derek Nguyen, The Housemaid is set on a rubber plantation called Sa-Cat in Vietnam in 1953. The French still occupy the country, and Sa-Cat has a reputation for cruelty and punishment. It is said the ground is fertilized with the bodies and blood of the Vietnamese slaves that built the plantation and the estate that overlooks it. The movie begins with an aerial tracking shot of the lush rows of rubber trees, swaying in the breeze. The tour of the plantation ends at the estate. The building isn’t quite the Overlook Hotel, but is eerie in its emptiness and cast in shadows.

Sa-Cat is the ancestral home of Captain Sebastien Laurent (Jean-Michael Richaud). The plot commences when Linh (Kate Nhung), the young housemaid, discovers the captain stabbed to death in his bed. She is brought to the police station and questioned by a French detective and a Vietnamese officer, a device that allows the film to unfold in flashback.

Linh came to Sa-Cat looking for work. Mrs. Han (Kim Xuan), the head of the household, took pity on the young orphan, hiring her on a trial basis. It is a large estate overseen by Han, the groundskeeper, Mr. Chau (Kien An) and the cook/part-time witch, Bao (Linh Son Nguyen). When asked why so few, Bao relays the terrible story of the haunting of Sa-Cat. Captain Laurent had a wife, Madame Camille (Svitlana Kovalenko), who hated living in Vietnam. While the captain was away at war, she went mad, drowning her child in the bath and herself in the river. Her laughter and the cries of the Laurent child echo through the estate. The nursery has been untouched since her suicide, but the creaking of the cradle can be heard from the floors below.

Laurent is away dealing with insurgents while Linh learns to run a French household. He returns gunshot and she is given the task of tending to his wounds. Mrs. Han learns that her own mother is dying and leaves the care of the captain and his plantation to Linh and Bao. The captain’s health deteriorates, forcing Bao to use her witchcraft to save him, but the spell she uses rouses the ghost of Madame Camille. The ghost begins to hunt the living on the grounds of Sa-Cat, aided by a mob of the slaves who died on the plantation. A love affair kindles between Linh and Laurent, and the ghost’s murderous thirst focuses on the new couple.

The bulk of the movie is a straightforward horror movie, exotic in locale, with themes that are reflective of America’s bloody history of slavery. The anti-colonial and anti-slavery motifs are powerful fodder for a horror film, making Madame Camille not only a ghost but a weapon created by the land itself. The manicured rows of rubber trees become ominous at night when shrouded in mist. Nguyen exhibits an expertise for creating jump-scares when power outages shroud the estate house in darkness and the characters have nothing but candlelight to protect them. With her black dress, pale white skin and black eyes, Madame Camille is a perfectly designed movie monster, and as Linh’s story builds to her final night with the captain, you wonder how the housemaid will survive the ghost. It is at this climatic point that the Shyamalan Effect kicks in.

The problem with the twist is it feels like a betrayal of the movie to that point. People seem to forget that when Shyamalan pulled his big reveal in The Sixth Sense it actually added a layer of gravitas to the film. In The Housemaid, the twists and reveals are ill-considered and unimportant. New information is thrust into the closing moments of the film and does less to entertain than to raise questions about the filmmaker’s trust in his audience. The messages about empire and the bloodlust of capitalism were clear before the movie ultimately becomes what Nguyen decided to make it.

By its conclusion, The Housemaid is a disappointment. It had been a movie deep in genre tropes that were happily forgiven because the ride was clever and atmospheric. Ultimately, cleverness is like any other aspect of a horror movie. Too much is gratuitous, and less is definitely more.