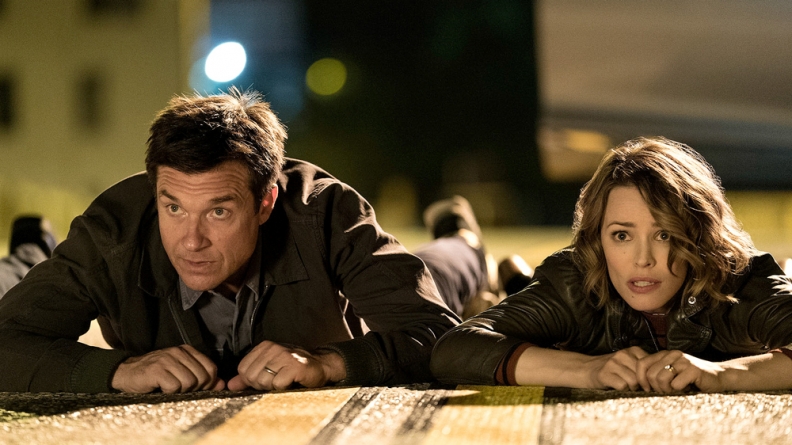 Not a bad way to blow a Friday night.

More and more mainstream comedies find themselves expanding in scope and cost to compete with a marketplace full of tentpole genre pictures, but few bridge the gap between laughs and thrills as well as Game Night. Advertised ceaselessly and appearing like a bad idea given too large a budget, this sly comedy trussed up in the trappings of the whodunit and action thriller genres succeeds by amassing a likable cast, interesting character dynamics and a genuine air of fun throughout.

Jason Bateman and Rachel McAdams star as Max and Annie, a terminally competitive married couple who host a weekly game night with their friends. It’s implied that the roster has fluctuated over the years, but the mainstays are Kevin (Lamorne Morris) and Michelle (Kylie Bunbury), a husband and wife who’ve been sweethearts since their teen years, and Ryan (Billy Magnussen), a lovable airhead who brings a different ditzy hook-up to each game. Max and Annie are having trouble conceiving a child, because stress is affecting Max’s sperm count, in the form of his better at literally everything older brother Brooks, played with an off-type sleazy charm by America’s Real Dad Kyle Chandler.

Brooks insists on hosting game night and kicking things up a notch above Scrabble and Trivial Pursuit, resulting in a ridiculous MacGuffin chase involving violence, carnage and mayhem, in an ongoing escalation of stakes that calls into question what’s real and what’s part of the mystery party service Brooks hired. It’s not exactly the most original film, but the script by Mark Perez synthesizes elements of other films quite well. There’s the obvious connection to David Fincher’s The Game as well as trappings from any number of Agatha Christie adaptations, but it’s all kept on track by the assured direction of Horrible Bosses scribes Jonathan Goldstein & John Francis Daley, in their second and most confident outing as directors.

The duo borrows heavily from the visual style of Edgar Wright to keep the twisty, often implausible narrative tethered to an approximation of reality without losing the believability necessary to make us care about the characters and laugh at their misfortunes. Jeffrey Wright plays the obviously fake FBI agent introducing them to the fake kidnapping plot, but when actual criminals break in and engage in a huge, well choreographed fight with Brooks, the intensity of the artifice is meant to let us know this is where the real stakes are and that the game is not just a game. But the action and danger in the “real” game plot is so over the top and blockbuster like that it’s easy to believe it could potentially be all part of an even larger game. That ever present questionable sense of reality keeps things exciting, while the core characters feel real, so our focus remains on their interpersonal dynamics and the fast flying quips born from those conflicts.

If the film has a failing, it’s in the third act, where the scale of the action and the absurdity of the plot machinations threaten to get too big and too bold, but by the time the Game Night veers off that particular cliff, it’s already done such a great job establishing the characters that you’re willing to follow them through whatever absurd rings of fire await them. It has the sincerity of a much more intimate film nestle inside this loud, glossy studio picture, like watching a Fast & Furious film written by the Duplass brothers. All the sturm und drang is there for Goldstein & Daley to show they should get to direct a superhero movie (which worked, they’ve been hired to helm DC’s Flashpoint), but that’s just window dressing to keep mainstream audiences pacified while quirky jokes about pop cultural ephermera makes the geeks laugh.

Much of that humor relies on the char of the cast, and the great chemistry between Bateman, McAdams and Chandler. Max & Annie feel like a relatable married couple on the eve of leaving behind the frivolous pursuits of their twenties and Brooks represents the literal manifestation of the freewheeling excitement they’ll have to leave behind. Magnussen is a real standout as the stupidest person who’s ever lived, but it’s Breaking Bad’s Jesse Plemons who steals the show as Max’s spooky cop neighbor who the gang fights like hell to hide game night from.

Game Night’s not much more than disposable popcorn fun, but at 100 minutes, not being a sequel or a shitty remake, and not overstaying its welcome? Not a bad way to blow a Friday night.