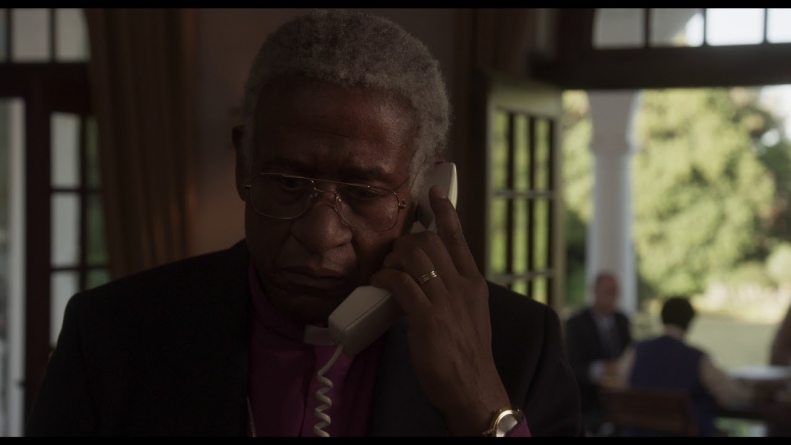 The Forgiven will stir emotions in you then make you hate yourself for feeling them.

There was a period between 1992 and 2006 when The Forgiven would have been considered an important movie, now its existence calls into question the wisdom of redemptive arcs for white supremacist in stories about race. Set in South Africa in 1993, Apartheid has ended, a free and fair election has brought Nelson Mandela to power and an uneasy peace has begun between white and black South Africans. Murder had been a tool of repression of the majority black population by the former white government, leaving grievances to settle. Mandela appoints Archbishop Desmond Tutu (Forest Whitaker) to head The Truth and Reconciliation Commission to unearth the crimes and the bodies buried beneath the earth of his country.

When we first meet Tutu, he is sitting with his wife, Leah, and his oncologist who tells the archbishop that his body is now free of cancer. Having beaten one disease, he is now ready to tackle the one that eats at South Africa: racism. This is the sort of explicit symbolism employed by director Roland Joffé throughout the film, especially in the instances when he can render his main theme in black and white. Given the state of race relations in the U.S., he might have been worried that his American fans would miss a subtler message, but that causes an unfortunate side effect. This is a very high-minded film that so earnestly ticks off every box on the Oscar bait checklist that it dances on the edge of parody for its entire runtime.

A workaholic, Tutu dives into his commission work. A myriad of crimes await him, but the vanishing of the daughter of one Mrs. Morobe (Thandi Makhubele) preoccupies him. He fears the girl fell victim to a murder squad sanctioned under a directive called Operation Hacksaw, so Tutu heads to the most nefarious prison in Cape Town, Pollsmoor Prison, seeking answers from one of its prisoners, Piet Blomfeld (Eric Bana). Blomfeld is a brutal racist who is unrepentant for the crimes he committed for the former regime. He quotes Plato and Milton and considers himself more than superior to the black archbishop.

An homage to The Silence of the Lambs ensues. Blomfeld plays the monster with the answers to Tutu’s inexperienced yet doggedly determined naïf. In their scenes together, Whitaker and Bana put on an acting war. Their characters argue about race, death, philosophy and literature in a much smaller and compelling movie than the larger one they are a part of separately. The two actors offer intense, nuanced and emotional performances for the approximately 30 minutes they share onscreen. The rest of the movie is another matter. Tutu has to get to the bottom of Operation Hacksaw and hold committee hearings. Blomfeld has to stalk around Pollsmoor and scowl at everyone around him, black gang members and white guards alike.

Whitaker gives a very odd performance. Accented and wearing a prosthetic nose, the actor disappears into his role in some scenes while offering a chortling caricature of a very famous man in others. Bana’s has the advantage of not playing even a minor historical character but a composite of homicidal racists. His righteous certainty of the superiority of his whiteness is set to predictably unravel, especially when Tutu’s message of love and tolerance infects him. We’ve seen Bana deliver charismatic villainy before to more memorable results, so the only real surprise is why Joffé and co-writer Michael Ashton thought it wise to make this story about black excellence into yet another white savior yarn.

The dramatic action of the movie hinges on whether Tutu can somehow transform Blomfeld into something resembling a decent human. As the movie walks toward its climax, it becomes evident that the fate of the entire commission rests upon Blomfeld. There are forces that want to shutter Tutu’s work because they think the commission has become too politicized. The archbishop needs a win and the white supremacist delivers in a nick of time. It is ahistorical nonsense foisted upon a moment in history ripe with story. Moreover, the instinct to continually humanize monstrous individuals needs to be dulled for a time. We get it. It may be time to focus on characters that abstain from murder and genocide and uplift their humanity in our historical dramas. But then the filmmakers would have needed a different title.

Roland Joffé directed The Killing Fields and The Mission. He knows how to make a movie, and the end of The Forgiven may cause you to shed a few tears. Mrs. Morobe gives a stunning monologue to the face of one of her daughter’s murderers. She speaks for every parent that has ever feared the loss of their child. Thandi Makhubele doesn’t utter a false syllable in her delivery of the monologue, and she is absolutely shattering. Cut to Tutu sitting with the blonde white wife of the murderer on a staircase. The woman asks for forgiveness and cries. She says “I’m afraid you will just think these are white tears,” to which Tutu responds, “Tears have no color. You just look like someone who needs a hug.” The juxtaposition of those two scenes summarizes all that is wrong with The Forgiven. It will stir emotions in you then make you hate yourself for feeling them.