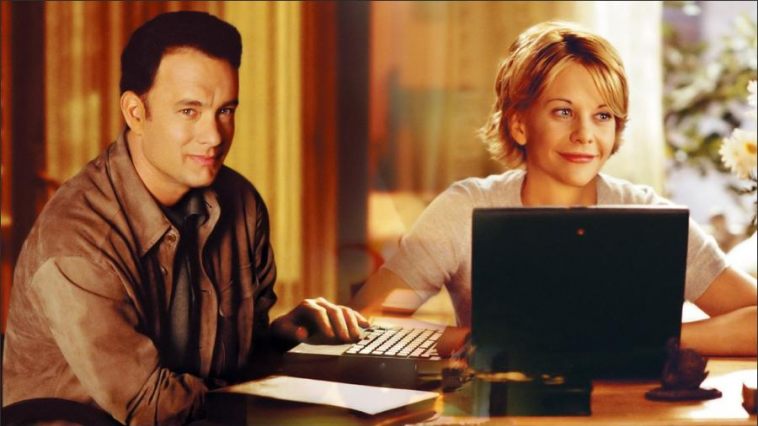 Of all the Tom Hanks/Meg Ryan romantic comedies, You’ve Got Mail truly packs a one-two nostalgia punch. Emblematic of ‘90s rom-coms and intrinsically tied with that decade’s biggest technology boom, the film is an unavoidable touchstone for those of us who experienced the ‘90s firsthand. Directed by Nora Ephron and co-written by Nora and Delia Ephron, the film was a major box office hit in 1998. Itself an update of the 1940 rom-com The Shop Around the Corner, You’ve Got Mail is rooted in the rom-com staple of two people falling in love with their supposed nemesis. Whether it is via letters, emails or messages on dating apps, fawning over a more or less anonymous pen pal who is as-yet an ideal is relevant to more than just millennials. After all, when you’re looking for love but unwilling to interact with the people directly around you, the easiest thing to do is head for the Pennysaver, online chatrooms and, now, Tinder.

Hanks’ and Ryan’s bullheaded lovers (Joe Fox and Kathleen Kelly, respectively) are bookish (literal owners of rival bookstores) and leaning philosophical, even existential, when it comes to their relationship. In one email, “ShopGirl” confesses to “NYC152,” “I lead a small life. Well, valuable, but small. And sometimes I wonder: do I do it because I like it, or because I haven’t been brave?” This raw vulnerability is rhetorical, though. “I don’t really want an answer. I just want to send this cosmic question out into the void. So goodnight, dear void.” Both are guilty of treating their email romance as a diary, giving an abbreviated overview of their backgrounds and current lives while simultaneously braving the confessional and depicting themselves as observant, deep thinkers with winning wits. We all do it.

Just like in today’s online relationships, their anxiety stems from the awkwardness of their first real life meeting. Both put it off – Joe before and after he knows the identity of his pen pal. Their seemingly incompatible “real life” personalities prove to be a late act obstacle, as Joe comes to terms with his attraction to Kathleen but fears resistance and outrage from her. In a more technologically modern take, both parties would likely be able to do some online sleuthing and find out the identity of their pen pal, and that’s not outside the realm of possibilities for You’ve Got Mail. However, the film aims to comment on the potentially missed opportunities we have every day. Ephron provides us with morning routine montages, as we follow Joe and Kathleen on their way to work and witness the handful of might-have-been meet-cutes. The films original tagline, after all, was “Someone you pass on the street may already be the love of your life.” And the warring nature of the corporate businessman Joe Fox and the suffering independent bookstore owner Kathleen Kelly only goes to show us that, without the wonders of internet anonymity, they would never have attempted a relationship in the first place.

For some, You’ve Got Mail may seem antiquated, but there’s a fine line between antiquated and nostalgic. Sure, the film portrays a brief period time amid a rapid technology evolution that would soon see the reality of the film’s AOL Chats become obsolete, but who could resist that dial up tone? (Fine, many people.) Even if the internet has evolved to allow people to message each other instantly, at any time, as opposed to booting up AOL and chatting only when simultaneously online (and not using the phone line), You’ve Got Mail is fascinating as a contemporary depiction of the early days of online communication, prescient even in its exploration of online love. It’s much more than just a historical curio and a snapshot of a highly specific period and aspect of internet culture, but it is most certainly that.