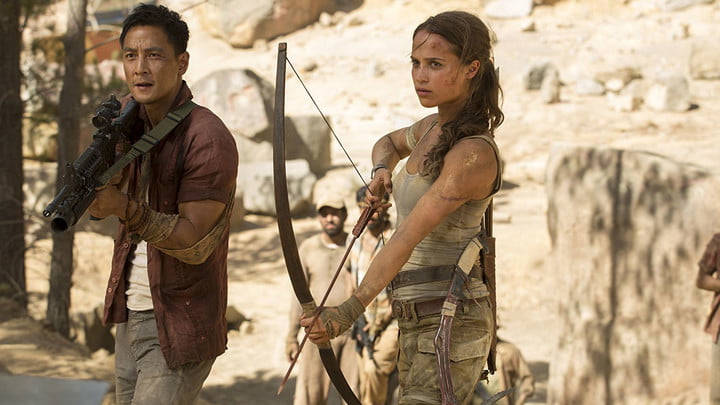 In Hollywood’s latest futile attempt to convince itself video games make reasonable source material for film adaptations, the new Tomb Raider borrows precious little from its Angelina Jolie-fronted predecessors, instead taking its cues from the 2013 video game reboot, as well as some elements from its 2015 sequel. Those games themselves borrowed heavily from the Uncharted series, but the finished product on screen hews closely to some semblance of realism, a complete 180 from a pop cultural phenomenon once known for little else than large, polygonal breasts.

Gamergaters will no doubt be incensed by Alicia Vikander’s casting in the lead role, because for them Lara Croft was never more than a buxom sex object with a pair of pistols and some short shorts. This adaptation, from The Wave director Roar Uthaug, is considerably less exploitative, seeing the opportunity for an un-pulpy, Bourne-esque adventure film. It’s got the rough texture and reckless camera we’ve come to expect from that particular strand of genre filmmaking, but with a sharp protagonist as clever as she is capable.

Well, that’s the idea, anyway. The gravitas that Academy Award winner Vikander brings to the role is palpable, but the script doesn’t give her much to work with beyond her own charm. The Lara Croft we meet is a broke bike courier who can barely afford to pay for her kickboxing classes. We know she lives in a bad neighborhood because there are police sirens in the distance as she looks forlornly at the night sky. But right when we start to feel sympathetic to her gig-economy-afflicted millennial existence, we find out she’s the heiress to a vast fortune. The only thing she has to do to claim it is sign some paperwork asserting that her long missing father, Lord Richard Croft (Dominic West), is in fact dead.

But Lara can’t accept that fact. Her archaeologist father went missing on a routine trip years ago, but a Japanese puzzle toy he left behind reveals to her his double life. He wasn’t just a charming businessman with a taste for the arcane, but rather an adventurer obsessed with protecting the supernatural from an evil organization called Trinity. Lara pawns a family keepsake and hires Lu Ren (Daniel Wu), an alcoholic ship captain with his own ties to her father’s disappearance, to take her into the Devil’s Sea to find out what happened to her old man.

This being an Indiana Jones-indebted adventure film, there’s some MacGuffins and pseudo-mystical hoodoo afoot, but the puzzles and intrigue are sub-Crystal Skull at best, hovering closer to the quality of The Da Vinci Code series. The film’s biggest problem is its length and inconsistent tone. It’s a full two hours, with a lengthy first act that does little to really make Lara a real person. The most we get is her boss marveling at her only being a bike courier because she quotes Shakespeare? The final act’s actual tomb raiding is uninspired, poorly shot and largely perfunctory. But there’s a middle section, when Lara is isolated on the island, that really sings.

Uthaug isn’t particularly good at shooting action, as even the simplest of hand-to-hand combat is composed with so many unnecessary cuts, but he has a gift for a certain kind of spectacle. He’s much more suited to the silent sequences of Lara braving the wild than the rest of the picture, which almost makes one yearn for a feature-length, survival-mode movie instead. But then we’d miss West’s welcome screen presence as the senior Croft and Walton Goggins’ lovely turn as the world’s meanest middle manager, a villain far too interesting for a movie this bland.

That’s not to say Tomb Raider is a complete waste of time. It’s fun enough and has a handful of nice moments, but this movie wasn’t made to simply get on base. It’s designed to be a home run that enchants the audience enough to kick-start a new franchise. Taken on those merits, there’s little here that will make anyone thirsty for a sequel. It’s the very definition of “just fine,” which doesn’t translate to the necessary returns this sort of IP-regurgitation requires. Look forward to another attempt in five or six years with a new ingénue and a slightly different take on the same threadbare premise.