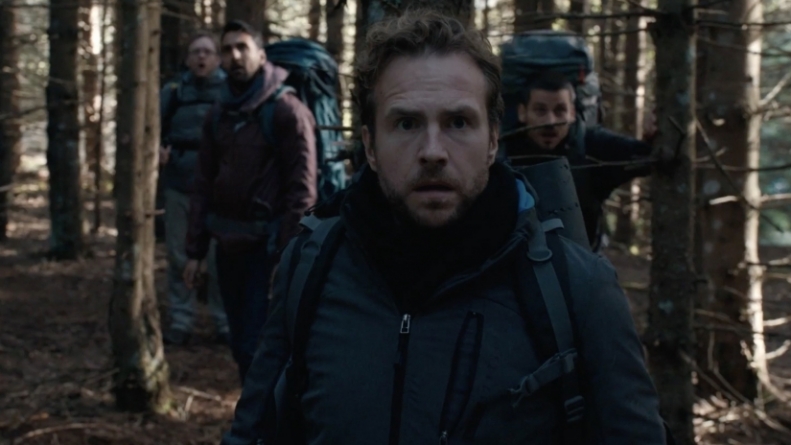 The Ritual is an effective thriller.

The one thing that a creepy creature feature absolutely needs to get right is its monster. The Ritual’s villain—a strange and terrifying mixture of human, moose and haunted wardrobe—was created by author Adam Nevill (who wrote the book on which the film is based), designed by frequent Guillermo del Toro collaborator Keith Thompson and brought to life by director David Bruckner in his debut feature-length film. Bruckner, best known for directing segments of horror anthologies like V/H/S and Southbound, does an excellent job of pacing out the creature’s reveal over the course of the film, giving the audience enough to avoid frustration but still saving a shocking, exhilarating payoff for late in the film.

The Ritual’s effective story is simply a foundation for this creature. Four male friends go hiking on a remote Swedish trail following the violent death of their posse’s fifth member, Robert (Paul Reid). Protagonist Luke (Rafe Spall) was present for Robert’s death and watched from behind a display case, frozen in terror, as his friend was beaten to death by burglars while Luke stopped to pick up some booze at a corner store. Luke’s failure to act has caused tension between him and the remaining members of the group, particularly the out-of-shape Dom (Sam Troughton), who twists his knee halfway through their journey. De facto group leader Hutch (Robert James-Collier) decides that they should take a shortcut through an ancient forest in order to get Dom back to civilization to treat his injury. A storm within in the forest diverts them to an abandoned cabin, where they spend the night and each experience a different yet equally terrifying dream. This has a particularly negative effect on Phil (Arsher Ali), who ends up praying to a pagan statue, nude, in the cabin’s attic.

Up to this point, The Ritual is an effective thriller, even without the introduction of the forest-dwelling creature at the center of the film. Though the performances are fairly straightforward and the dialogue terse and bordering on the cliché, the pacing is fast and the hints of deep mythology the group finds in the forest and in the cabin are tantalizing. Unfortunately, the film’s quality dips significantly as the group start to bicker more aggressively and engage in a number of stupid, predictable attempts to ignore the horror of their situation. As they are picked off one by one, the characters continue to react to their situation with almost unbelievable stupidity. This could have been tempered by strong characterization, but all of them end up boring and unlikable. The saving grace of the film’s sagging midsection is increased hints as to the presence of a truly interesting entity lurking among the trees.

Though the performances and screenplay never reach the heights of the villain and the overall premise, Ben Lovett’s excellent music and Andrew Shulkind gorgeous, verdant cinematography more than amply support the film’s strong central components. And Bruckner shows a particular skill for staging scenes of disturbing horror, particularly the aforementioned cabin nightmare scene.

The monster truly emerges in the film’s final third, though the script, adapted from Nevill’s novel by Joe Barton, doesn’t rise to support it. While the characters and plot never ignite, the beast and its underlying mythology only grow more and more compelling. The appearance of a woodland cult that follows the beast is a too-convenient plot development, a way to suddenly infuse tension and exposition into the sagging plot, but it does provide the opportunity for suggestions of a larger demonic world that film’s central baddie inhabits. Though the human characters complete full arcs by the end of the film, the door is left wide open for further exploration of The Ritual’s monster and mythology.